What We’ve Learned From Two Years of Tracking NFL Concussions

A member of the Cincinnati Bengals walks through a tunnel before an NFL football game against the Baltimore Ravens, Sunday, Nov. 10, 2013, in Baltimore. (AP Photo/Patrick Semansky)

When FRONTLINE started investigating the NFL’s concussion crisis in 2012, we ran into an early stumbling block. We wanted to know how many head injuries were taking place in the league each season. The trouble was, no major news organization was keeping count. With little to go off besides the NFL’s own numbers, we decided to try it ourselves.

For the past two seasons, FRONTLINE’s Concussion Watch project has been tracking which players have gone down with head injuries, and how long they sit out post-concussion. Over that time, more than 300 players have been added to the league’s official injury report because of a concussion. With Super Bowl XLVIII now over, here are five takeaways from the data:

1. One-third of all concussions are left off the NFL injury report

Last week, the NFL released figures showing 228 diagnosed concussions during the 2013 season, and 261 in 2012. But just 152 concussions were listed on the league’s official injury report this past season, and only 171 were added in 2012. By that count, 166 went unaccounted for.

Injury reports are the only publicly available data on which players suffer concussions over the course of a year. When roughly one-third of head injuries are left off the list, there can be no check on who the missing names are, how quickly they’re returning to play, or whether the injury marks a repeat concussion for the player.

Much of the gap can be explained by the way injuries are publicly reported. For example, teams don’t release injury reports until Week 1 of the regular season, meaning most concussions from training camp are left off the list. Likewise, it’s unclear how many concussions go unreported when an injured player’s team has a bye week and the player recovers before his next game. In that case, the player would not go on the injury report.

Teams also stop releasing injury reports after their final game of the year. That means there is no public record of any injuries from the final regular-season game for the 20 teams that don’t make the playoffs. The same is true for playoff teams as they’re eliminated from postseason play. 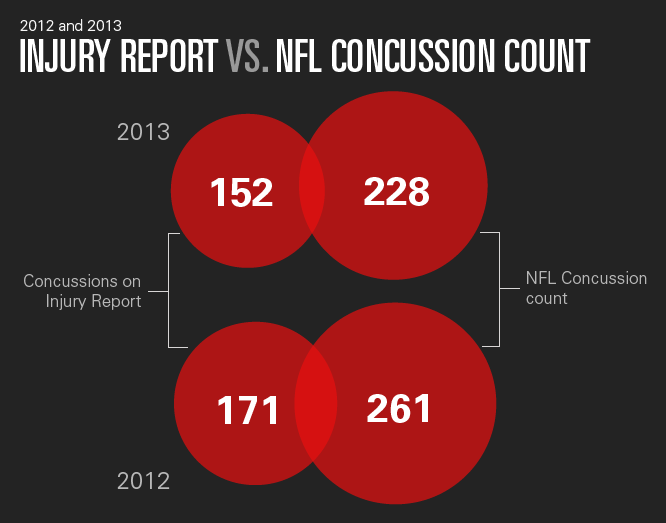 2. Half the time, injured players come back without missing a game

In at least 86 instances during 2012, a player returned from his concussion without missing a game. In 2013, it happened 74 times. While there is no standard recovery time from a concussion, guidelines endorsed by the NFL Players Association from the American Academy of Neurology find that athletes are at greatest risk of repeat injury in the first 10 days post-concussion. And research suggests that the more head injuries a person suffers, the more likely they are to face complications later in life. 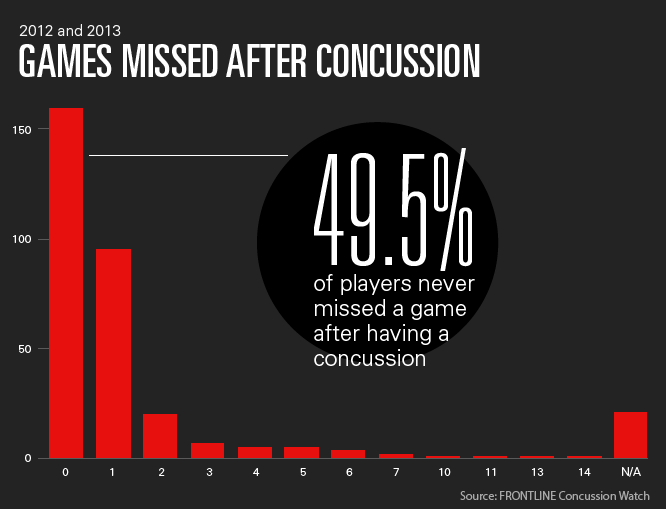 3. Receivers and cornerbacks get more concussions than anyone else

Professional football has become more of a passing game than ever before, with passing yards surging by 26 percent over the last decade. This emphasis on throwing the ball has sure enough made the game especially risky for wide receivers and the cornerbacks that defend against them. In both 2012 and 2013, receivers went down with more concussions than any other offensive position — 29 and 20, respectively. Cornerbacks suffered 23 concussions in 2013 and 26 in 2012, more than any defensive position. 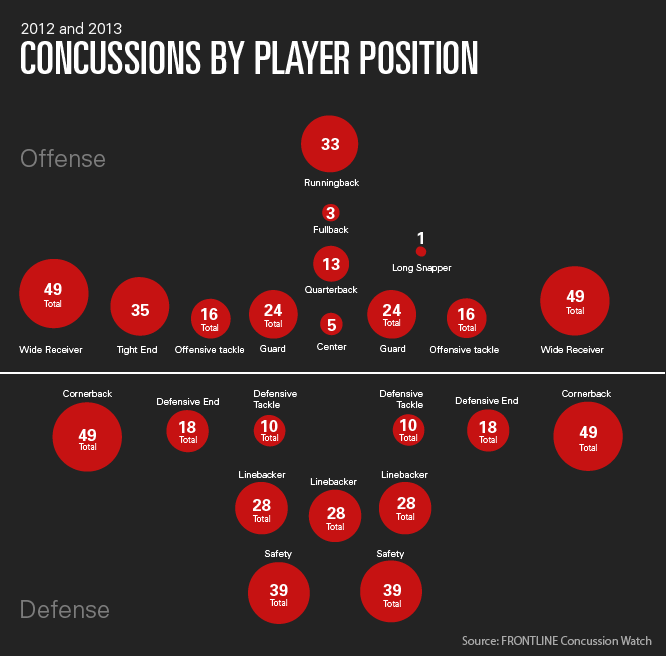 4. New rules have had mixed results

Since being taken to task by Congress in 2009, the NFL has adopted a series of rules changes designed to reduce the risk of concussions. Players who show signs of a head injury can no longer return to the field the same day. Kickoffs have been moved up by five yards to encourage fewer kickoff returns — one of the most dangerous plays in football. The league has also adopted a new rule to reduce, though not completely eliminate, hits with the crown of the helmet and introduced stiff new penalties for hits to the head.

In 2013, the league saw a drop in the number of players placed on the injury report because of a concussion. Still, that figure has yet to fall below the total of 129 reported in 2010, the first full season to be played after changes were introduced. 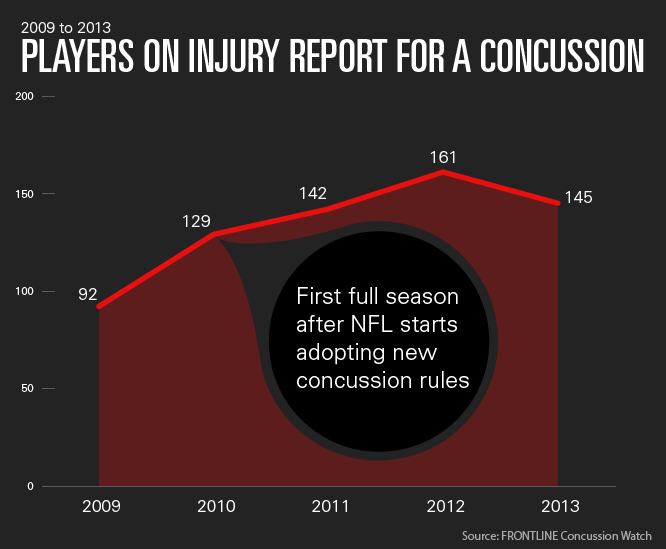 In the two seasons that FRONTLINE has been tracking figures, teams saw an uptick in concussions starting in the second half of the year, with the final eight games of both seasons accounting for 38 more concussions than the first nine. Week 12 brought the most concussions each year — 19 in 2012 and 14 in 2013.

Dustin Fink, a certified athletic trainer who tracks NFL head injuries on “The Concussion Blog”, says the uptick can also be explained by the repetitive nature of smaller, sub-concussive hits.

“The theory is that the more of those you sustain, eventually you’re going to lower your threshold for having a concussion,” says Fink.

He notes that all 32 teams report injury data during Weeks 1-3, yet there aren’t nearly as many concussions over that span. 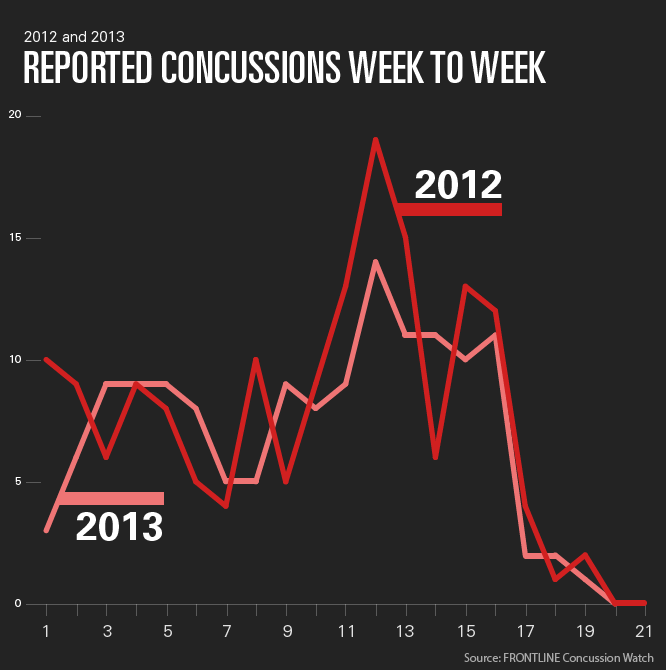