Concern about sexual harassment of women in the workplace has grown over the last three decades, but Americans do not think sexual harassment at work is inevitable, according to an exclusive Third Rail with OZY/Marist Poll. 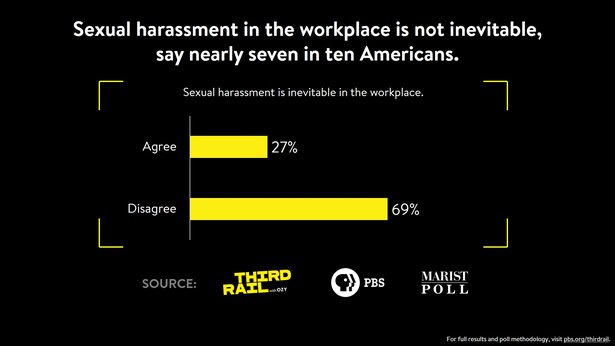 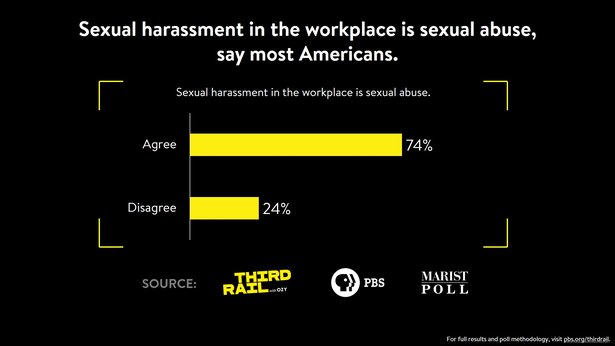 Many Americans (60%) disagree that what some women perceive to be sexual harassment is actually just innocent flirting intended as flattery. More than three in ten (32%) agree with the statement.  Regardless of most demographic groups, at least a majority of residents disagree with the statement that these actions are meant as flirtations. 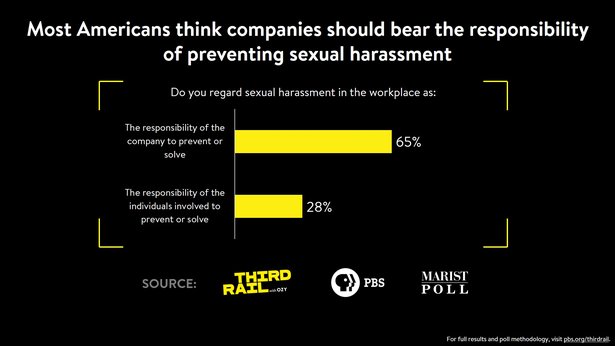 Nearly two-thirds of U.S. residents (65%) believe it is the responsibility of companies to prevent or solve the problem of sexual harassment. However, 28% think it is the responsibility of the individuals involved to prevent or solve the issue.  Men and women differ on this question. While 73% of women believe it is up to their company to guard against sexual harassment, fewer men, 56%, share this opinion.

Two-thirds of Americans (67%) disagree that women under pressure in the workplace are weaker and more emotional than men. 31%, though, think this is the case. Non-white Americans (41%) and men (36%) are more likely than white residents (25%) and women (26%) to consider women to be weaker and more emotional when faced with pressure in the workplace.

More than six in ten residents (62%) disagree that men are easier to get along with than women in the workplace. One in three Americans (33%) do think men are the easier sex with whom to work.  Women (39%) are more likely than men (26%) to say they get along better with men than women at work.

This survey of 508 adults was conducted September 19th and September 20th, 2017 by The Marist Poll sponsored and funded in partnership with WGBH Boston and OZY Media for the new PBS prime-time, cross-platform debate program Third Rail with OZY. Adults 18 years of age and older residing in the contiguous United States were contacted on landline or mobile numbers and interviewed in English by telephone using live interviewers. Mobile telephone numbers were randomly selected based upon a list of telephone exchanges from throughout the nation from Survey Sampling International. The exchanges were selected to ensure that each region was represented in proportion to its population. Mobile phones are treated as individual devices. After validation of age, personal ownership, and non-business- use of the mobile phone, interviews are typically conducted with the person answering the phone. To increase coverage, this mobile sample was supplemented by respondents reached through random dialing of landline phone numbers from ASDE Survey Sampler, Inc. Within each landline household, a single respondent is selected through a random selection process to increase the representativeness of traditionally under-covered survey populations. Assistance was provided by Luce Research for data collection. The samples were then combined and balanced to reflect the 2013 American Community Survey 1-year estimates for age, gender, income, race, and region. Results are statistically significant within ±4.3 percentage points. There are 429 registered voters. The results for this subset are statistically significant within ±4.7 percentage points. The error margin was not adjusted for sample weights and increases for cross-tabulations. See full poll results »