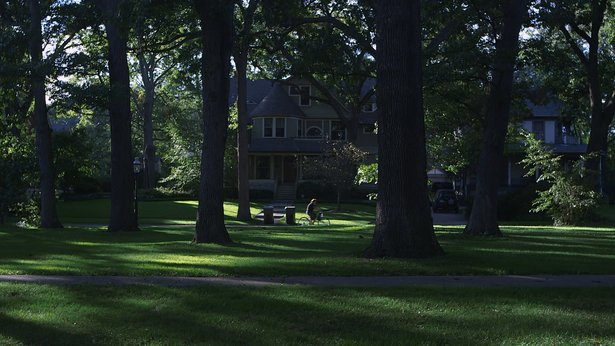 The garden suburb is one of Olmsted's legacies. Olmsted’s vision of the future metropolis included suburban villages. In this new setting, Olmsted predicted, a suburban yeomanry would develop that would be the backbone of the increasingly urban nation, just as the independent yeoman farmers of an earlier time had been the mainstay of the rural republic. Amid the flux of modern life, with its threat of a class conflict, the home-owning suburban middle class would provide a balance wheel for society. “They stand in the vanguard of our civilization,” he declared; “they are our stronghold against agrarian and nihilistic tendencies. They are the best security we have.”

Although many suburbs were “little better than rude over-dressed villages, or fragmentary half-made towns,” some of them contained “the most attractive, the most refined and the most soundly wholesome forms of domestic life, and the best applications of the arts of civilization to which mankind has yet attained.”

In planning a suburban village, the safeguarding of natural scenery was of special importance. The suburban movement, Olmsted was sure, arose because “with the advance of civilization there is in the mental constitution of civilized men an increasing susceptibility to . . . the beauty of nature.” Roads and walks were also crucial. The streets and walks of the village should be part of a public space that demonstrated the existence of true community in the village. Some of the best scenery should also be reserved for public use: stream valleys, groves of trees or places with fine views. In that way all residents, rather than a few individuals, would benefit. 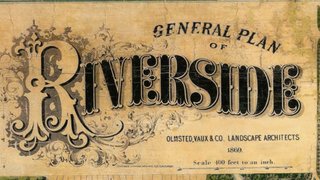 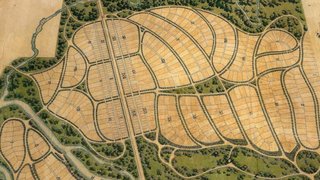 Olmsted demonstrated his concept of the suburban residential community most fully in Riverside, Illinois, on sixteen hundred acres along the Des Plains River west of Chicago. There, in a period of two years beginning in the fall of 1868, he and [Calvert] Vaux designed and laid out the most fully developed community of either man’s career. Olmsted inspected the site, wrote the principal report, and designed a large section of the plan while Vaux was out of the country at the close of 1868.

Securing an adequate amount of public space for recreation and safeguarding the most scenic areas for use by all residents were special concerns, and the plan for Riverside made ample provision for them. The designers wished to reserve the entire floodplain and banks of the Des Plains River within the village. They also set aside two large areas of upland and public green space – Scottswood Common and the Long Common. 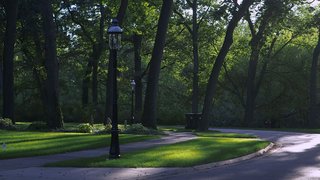 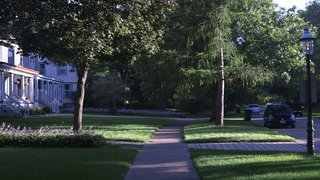 Provision of first-class roads was one of the major differences between the suburbs that Olmsted designed and those of his contemporaries, many of whom constructed streets with inadequate foundations, grading and drainage. That failing nullified what he viewed as the “greatest value to people seeking to escape the confinement of the town” – access to scenery. He was convinced that “frost-proof, rain-proof wheelways and footways, let them cost what they will, should, in selecting the site of a suburban residence, be the first consideration; in planning a suburb, the first requirement to provide for.”

The roads that he and Vaux constructed at Riverside had deep, solid foundations and a surface of fine crushed gravel that was smooth and quiet for pleasure carriages, soft and cool for horses’ hooves, and so firmly packed as to be virtually waterproof. Drainage was secured by an elaborate system of paved gutters with frequent gratings and underground silt basins leading to drainpipes. The wide sidewalks were paved, and there was ample space on the road’s edge for grass and trees. Such a road and sidewalk system was expensive, but the expense was worthwhile, since in Olmsted’s view “a road suitable for pleasure-driving is one of the greatest common luxuries a civilized community can possess.”

In achieving the desired quality of community, the course of the street system was as important as its construction. The key element in Olmsted’s designs was the curvilinear flow of the streets. In some of his subdivisions, curving streets followed the contours of the land, reducing the grade. (A good example is the series of residential streets at Point Chautauqua on Lake Chautauqua, New York, where the road was to enter near the lakeshore and then run gradually up a hill to the individual house lots.) The level terrain of the Illinois prairie made this consideration of little importance, but even so the curvilinear streets at Riverside served to create the proper setting. The streets formed an enclosed setting for the village, in contrast to the rectilinear gridiron street system of Chicago: “As the ordinary directness of line in town-streets, with its resultant regularity of plan would suggest eagerness to press forward, without looking to the right hand or the left,” Olmsted explained, “we should recommend the general adoption, in the design of your roads, of gracefully curved lines, generous spaces, and the absence of sharp corners, the idea being to suggest and imply leisure, contemplativeness and happy tranquility.” The psychological basis for Olmsted’s decision explains the distinctive street pattern on the plan of Riverside. 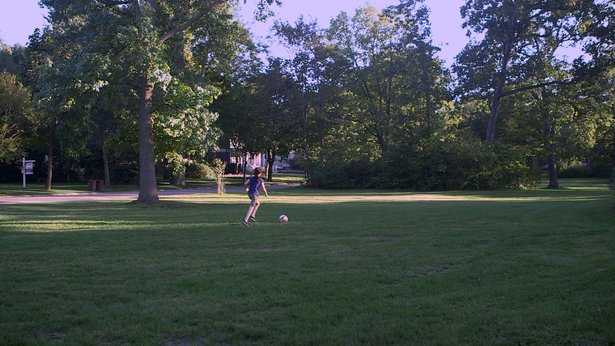 The curving streets and the avoidance of right-angle intersections created a number of triangles that added to the public space of the community. Most houses were within six hundred feet of a triangle, and nearly all were within a thousand feet of one. These were to serve as neighborhood play areas, and Olmsted intended to furnish them with “croquet or ball grounds, sheltered seats and drinking fountains, or some other object which would be of general interest or convenience to passers-by.”

The streets with their sidewalks and roadside trees, the large public recreation grounds, and the small triangles made up the public landscape that produced the overall structure of the Riverside community. It was the communal setting for the private domesticity of the individual family homes, both fostering and expressing “the harmonious association and cooperation of men in a community, and the intimate relationship and constant intercourse, and interdependence between families.” Public recreation areas, drives, and walks made up some seven hundred of the sixteen hundred acres covered by Olmsted and Vaux’s plan. 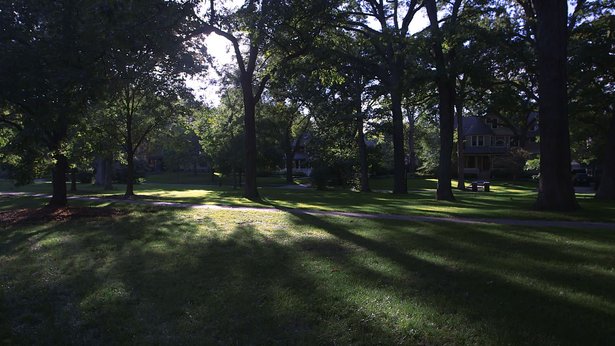 Meandering streetscape of Riverside, Illinois. The space between the public roads and the houses was private property with a public function. It was the transition zone between the communal and the domestic. Olmsted required setbacks of thirty feet so that private houses, especially poorly designed ones, would not intrude too closely on the streetscape. To separate the two realms further, he required that each householder plant and maintain two trees between the sidewalks and the house.

There was also the question as to whether the boundaries between house lots should secure private seclusion or show a sense of community. Olmsted felt that the treatment of property lines should express both elements and disapproved of open lawns with no mark of division. He was equally opposed, however, to “high dead-walls, as of a series of private made houses, as is done in some English suburbs.” Instead, he preferred using hedges and fencing in a way that created “private open-air apartments” of the home without too great an expression of unsocial withdrawal.

By these various means Olmsted planned the space along the roads of the village to express the fact, as he said, that its inhabitants “enjoy much in common, and all the more enjoy it because it is in common.” It is pertinent to note that most of the lots on the curvilinear streets were approximately one-half acre with a frontage of one hundred feet. Economically, at least, Riverside residents were to have much in common. Another communal feature was the town center of Riverside, where Vaux’s partner Frederick Withers designed a community chapel and a business block for stores and offices near the railroad depot.

Olmsted’s relations with the developer of Riverside, Emery Childs, deteriorated as time went on. Within a year Olmsted described the business part of the operation as “a regular flyaway speculation.” In October 1869 Childs decided to build his own house in the middle of the Long Common but finally abandoned the project after Olmsted vehemently protested. A year later Olmsted and Vaux terminated their business relations with Childs. Their plan was carried out only in the thousand-acre section east of the Des Plaines River, and in a small area west of the river, so that the largest section of parkland was lost to the community. In time the majority of the half-acre lots were divided into two lots. While the public space of the community retains much of its intended character, the space allotted for the houses is more restricted than Olmsted had wished.

After Olmsted and Vaux parted company with Childs, other problems arose. The Chicago Fire in October 1871 destroyed the records of the Riverside Improvement Company and the plans that Olmsted and Vaux had drawn up. A temporary settlement of refugees from the fire created overcrowding and led to an outbreak of malaria that gave the village a reputation for being unhealthy. Childs’ legal complications and the panic of 1873 resulted in bankruptcy of the company.

But the crucial accomplishment was the early layout of the system of streets and public grounds, so that the integrity of the plan could be preserved as the population grew. Overall, Olmsted was involved in planning some forty-five additional communities and subdivisions; but the development at Riverside remained not only the most comprehensively planned suburban residential community of his career, but of nineteenth-century America as a whole.