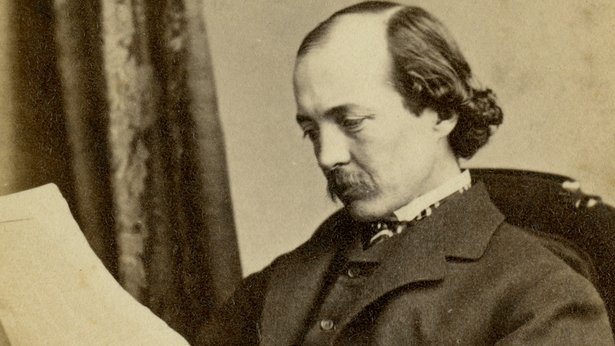 Frederick Law OlmstedNational Parks Service Frederick Law Olmsted’s relationship to his nation does not, at the outset, seem especially complex. He was as American as clam chowder: he was born in Connecticut, of New England stock, and died in Massachusetts. He lived an upper-class American life all his 81 years, despite a series of financial struggles. Even so, one might cite a line from Citizen Kane: Charles Foster Kane describes the object of his interest, shop girl Susan Alexander, as “a cross-section of the American public.”

In a way, an overview of Olmsted in his first decades also provides a parallel sense of the America of his day. For in his youth, he personified the nation. Frederick’s first brief job – in an America that was still finding and measuring itself – was as a surveyor in the New England woods. Then, three days before his 21st birthday in 1843, Olmsted went to sea: he spent a year sailing to China and back as a ship’s boy. One year with bilgewater and scurvy was quite enough, and he next went on to become a farmer – the first year farming for other people, then for several years on farms of his own.

How does this relate to the nation at large? America at that time was still very much a maritime country. On land, most of the population tilled the earth. So it was that in this sea-going yet deeply agricultural country, Olmsted’s first real jobs were as a sailor and then a farmer. He started out doing typically American tasks. But Olmsted’s temperament would never allow him to plow along (literally) in the straight row of the status quo. The young man who represented America then began to strive to change it. He became a reformer. 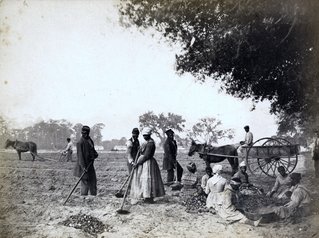 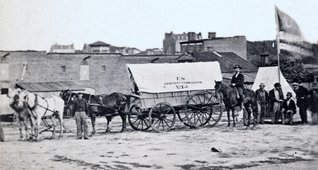 Olmsted created the U.S. Sanitary Commission in 1861 and ran it for two years.Library of Congress Apparently he did not especially intend to be one, at first. He accepted an assignment to travel through the antebellum South and write about it for The New York Times; he thought he would look at slavery with an open mind rather than with the bias of an abolitionist. But his trips below the Mason-Dixon Line, seeing slavery up close and personal, gave him a fervent dislike for human bondage. His trilogy of books on the Cotton Kingdom then served to widen the gap between North and South. In the end he bought arms for the free-soil settlers of Bloody Kansas – purchasing, for example, a mountain howitzer with rounds of canister and shell, fifty rockets, and six swords. This was not the work of a moderate: the howitzer was sent by a man who wanted to change things.

In 1855 he became the managing editor of Putnam’s Monthly Magazine;later he would co-found TheNation magazine, a long-standing bastion of what is called the liberal press. During the Civil War he essentially created and ran the organization oddly titled the U.S. Sanitary Commission – the predecessor of the Red Cross – an organization which, for the first time, tended to many of the human needs of soldiers, attempting to make the organized brutality of war less barbaric and deadly. All of this work came under the banner of reform. 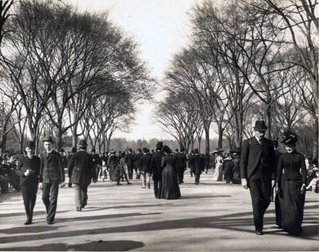 Mall of Central Park, c. 1870, an example of Olmsted's belief that natural spaces within a city would foster personal and civic health.Library of Congress In 1865 he finally settled into the job he’s known for today: he became a landscape architect. He designed all kinds of places, from cemeteries and arsenals to college campuses and private estates. But the centerpieces of his work were parks, in cities. Today the job of designing urban parks might not seem like the work of a crusader. But in Olmsted’s day, the very idea of a large park in a city was innovative. And Olmsted was bent on improving Americans.

In part, that meant improving their health. The booming American cities themselves weren’t healthy: they were darkened by smoke belching from factory chimneys; living conditions in tenements were often lethal, and city life was unhealthy for everyone. Among the symptoms of city life, Olmsted said, were “nervous tension, over-anxiety, hasteful disposition, impatience, [and] irritability.” Parks, to Olmsted, were as much about health as they were about aesthetics. Immersion in landscape, he thought, could counteract stress:

Is it doubtful that it does men good to come together in this way, in pure air and under the light of heaven? …The enjoyment of scenery gives the effect of refreshing rest and reinvigoration of the whole system.

At times Olmsted and his partner Calvert Vaux had specific health benefits in mind. They put a Dairy building in Central Park, where a child could get a free cup of fresh milk from cows tethered there; the purpose of this was to help stem cholera infantum. They also tried to ensure that all parts of all parks could be accessible by wheelchair. Olmsted deeply believed that city parks should be open to all, in a time when this wasn’t a universal opinion. Central Park, he said, was “intended to furnish healthful recreation for the poor and the rich, the young and the old, the vicious and the virtuous.” This social mixing was not just an accident, but a benefit. In Central Park, he said,

…you will find all classes largely represented, with a common purpose… each individual adding by his mere presence to the pleasure of all others, all helping to the greater happiness of each. You may thus often see vast numbers of persons brought closely together, poor and rich, young and old, Jew and Gentile.

Olmsted wasn’t just improving the health and the social conditions of America by creating parks; he hoped to improve morals as well. He described Central Park as “an educative and civilizing agency.” Olmsted passionately believed in a kind of noblesse oblige, not as a form of self-interest but as a civic duty: he wanted to teach the multi­tude. “A large part of the people of New York are ignorant of a park,” he wrote. “They will need to be trained in the proper use of it and be restrained in the abuse of it.”

All classes were welcome in the park, but the hoi polloineeded to be taught how to behave there. Olmsted installed signs describing the rules of correct behavior, and hired a special Central Park police force to enforce those rules. According to him, it worked:

No one who has closely observed the conduct of the people who visit the Park can doubt that it exercises a refining influence upon the most unfortunate and most lawless classes of the city – an influence favorable to courtesy, self-control, and temperance.

In creating parks, Olmsted was still reforming America. But he also took on a third role in his relationship to America. This one was not a conscious choice, but it happened. The man who had personified his country, and then tried to reform it, also became a prophet of its future. His prophecies took various forms. He made inventions that stuck. With Vaux, he invented the parkway, a greenway lined with trees that separated commercial and “pleasure-riding” traffic. In Buffalo they developed the first system of parks – seeing the city as a whole, and stitching it together. In Riverside, Illinois, they created an entirely planned community with an eye to both privacy and public interaction – using the gentle curving streets that would become standard in American suburbs. At Biltmore, in North Carolina, Olmsted set in motion the first full-scale experiment in scientific forestry in the country. In Boston he was the first to engineer (and protect) a wetland. All of these inventions would be echoed countless times in the America to come.

He fostered the idea of what we now call “urban greenspaces,” because he saw the future of American cities:

The time will come when New York will be built up, when the rocky formations of [Manhattan] will have been converted into foundations for rows of monotonous straight streets and piles of erect, angular buildings. There will be no suggestion left of its present varied surface, with the single exception of the Park.

In 1864 Olmsted visited Yosemite Valley. Though it had only recently been “discovered” by white men, Olmsted foresaw the day when a million people would visit Yosemite in a year. It would take, he estimated, a hundred years. Very nearly right; it took 89. He submitted a report suggesting the Valley be protected from lumbering, homesteading and grazing. Nature could benefit humankind; but could humankind benefit nature as well? To some it was preposterous: Why would we want to? Why on earth would the government protect wilderness?

A few years later, he took it a step farther. Niagara Falls was already a tourist trap. The towns on both sides of the falls were an appalling array of gambling houses, saloons, hotels and trinket shops; a visitor had to pay just to glimpse the cataracts. Olmsted proposed a plan that would allow everyone to see the falls and would preserve land around it. Not only that, but he even proposed to tear down the worst human intrusions. For his day, this was a radical recommendation.

At times he did misread the future. He was so excited by pneumatic tubes that he was convinced they’d be the FedEx of the era to come – just telegraph a tradesman across town, and they’d pop something in the tubes for you. He thought that eventually public kitchens would prepare the food for large groups of people. He was sure that steam travel was the way of the future.

But for the most part, he saw clearly. He saw that humans and nature would come in­creasingly into conflict, to the detriment of the environ­ment. He person­ified the nation, then he changed it; and finally, he saw what we would become as a nation. Well over a century ago, he voiced uneasiness about wealth and growth in America that we can only echo today:

Rich men and poor men, rich communities and poor communities. Penetrate the lacquer and which is which? Where is there trustworthy evidence of true prosperity? Who is it that is successful? What is healthy growth, & what is diseased monstrosity?