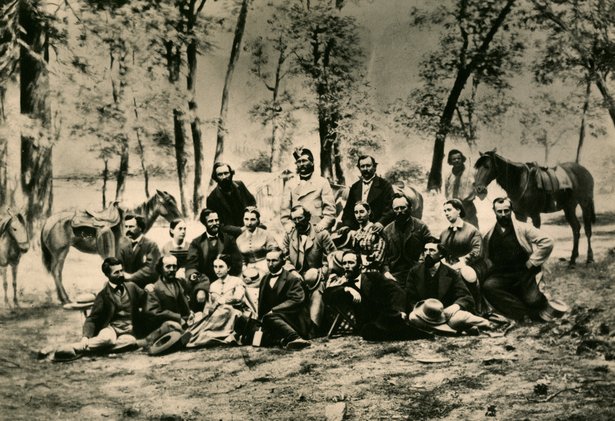 Olmsted and his wife, Mary, in California in 1864. (front row, third and fourth from the left)Yosemite Research Library January 6, 1865, was a fateful day in the history of American parks. That evening, two strangers showed up in Frederick Law Olmsted’s office in Bear Valley, California, a remote mining town at the rugged edge of the Sierras. Olmsted was there managing the Mariposa Estate – one of the most gigantic mining operations in the world. The operation was mining for gold, producing $25 thousand worth of it a month or more.

Olmsted had started at Mariposa in the fall of 1863. In a sense, he was a natural for the job. He’d already run through a labyrinth of occupations. One of them was supervising the building of Central Park, the biggest public works project that New York City had ever seen; another was the creation and management of the U.S. Sanitary Commission, which collected food, supplies and medicine for Union troops. The Commission’s thousands of volunteers cared for the wounded. Both the Park and the Sanitary Commission were huge jobs; Olmsted had clearly proven that he was up to the task of running an estate of 44,000 acres. “I know that I have unusual abilities, unusual, far reaching sagacity,” he wrote after accepting the job. “I can’t help feeling confident.”

But in another sense, the pairing of Olmsted and the Mariposa mines was an extremely unlikely match. He’d been a scientific farmer and had already co-created the still-in-progress Central Park. He knew how to grow things, knew how to design and build lovely landscapes. A gold mine was a strictly for-profit exploitation of resources – where Nature was plundered, not artfully pruned and shaped for aesthetic bliss.

Nor was Olmsted a born pioneer. He was a New Englander born and bred, and at the outset he evinced little appetite for the West. Before he reached Bear Valley he wrote, “I hate the wilderness & wild, tempestuous gambling men, such as I shall have to master, and shrink from encountering them as few men would.”

His first impression was no cozier:

A store has been robbed; two men have been killed with knives; another severely wounded in a fight; another has been stoned; and a plot of murder and highway robbery is reported to have been detected – all in the [first] three days I have been on the estate. 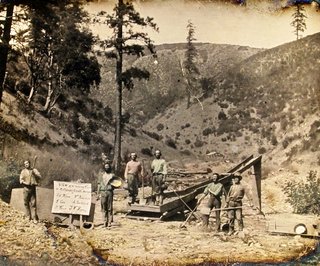 California gold miners, c. 1855. It had been fifteen years since the first flakes of gold flashed at Sutter’s Mill. But if Olmsted arrived in the Sierras at the tail end of the Gold Rush, he was there near the beginning of the legendary epoch that would be called the Old West. The town of Bear Valley was not so different from what would be the classic Hollywood back lot Western town – a single dusty street lined with three saloons, two livery stables, a billiard parlor, a bakery and a bathhouse, but no school.

Thirty men were buried in the cemetery. All but one, Olmsted noted, had been killed. “If men die, they die with their boots on. The natural death of the country is cold lead in the brain.” Half the mining men were Chinese, and all of them were essentially nomadic; only the Native Americans were in the Sierras to stay. “The people would seem to be almost completely emancipated from . . . the ordinary laws by which civilized life is maintained,” he wrote.

Civility and culture were hard to come by. Each group or clique, Olmsted noted, hated others: Yankees loathed Southerners, Italians despised Mexicans, and African Americans looked down on Native Americans. He sniffed at local barbarisms:

There are no churches in Bear Valley, but we had a horse race on the main street, at which a great deal of money changed hands, at noon today . . . Evening services consist of a dog-fight – a deep interest is felt by the whole population.

At first Olmsted was lonely. He was plagued by headaches; he missed his wife and four children and stepchildren. But he did his job coolly and effectively. When profits began to shrink, he promptly cut wages. To his surprise, the miners went out on strike. Boss Olmsted would not give an inch. “I don’t want the men to think that they can ever gain anything from me by striking,” he wrote, “and the sooner they learn this the better in every respect shall we be situated.”

He hired what today would be called scabs – replacement workers. The strikers tried to stop the scabs from working, so Olmsted hired guards to attend the mines. Violence broke out: stri­kers attacked guards. “The mob got the worst of it – no weapons but fists being used,” he wrote. And again: “I have a general strike to meet now, every mine stopped, and some little rioting.” But Olmsted by now was an experienced management man, and he was not all that concerned. “I am personally rather enjoying the lull,” he wrote. He brought in the local sheriff and had a warrant issued for the strike’s instigators; they immediately left the area. The strike collapsed.

Labor would not trouble the mining boss again. Soon his family joined him, to his great joy. Life grew calmer, more pleasant. A visiting friend wrote that Olmsted

…is a kind of little monarch here, has his own horses & servants at command, is universally well-spoken of & respected – conquered that strike business, has reduced wages, im­proved comfort among the men . . . on the whole is much better situated than I feared to find him. 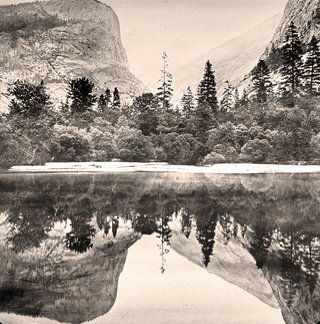 Reflections in Mirror Lake, Yosemite Valley, California.Library of Congress The family went on jaunts into the Sierras; they visited the sublimely beautiful Yosemite Valley, which amazed them. Olmsted’s headaches waned. He was paid well; his old debts were finally disappearing. “I am for the present making money pretty fast for such a vagabond as I am,” he wrote. “I never was happier, in the present, in my life.” It looked like he’d be a gold miner for a long time – perhaps the duration.

Then like a bolt out of the blue came that January night in 1865: the surprise visit of the two strangers. One of them was a bank agent. The other was a creditor of the Mariposa Company. To Olmsted’s astonishment, they had come to attach the entire property. His mining operation was not doing that badly, but his employers were virtually bankrupt; the parent company had collapsed around him.

The handwriting on the wall was indelible: Frederick Law Olmsted was out of work. He would have to start over again.

He had already co-designed Central Park. But what is retrospectively shocking to us today is that Olmsted had relatively little idea about what to do next. He seriously considered myriad options. He could be a railroad company president – a newspaper editor – run a wire service for newspapers. Maybe he’d create a kind of book-of-the-month-club company. Maybe he would go into the foreign service – he said he could be a consul in “a slushy old town where there are donkeys to let.” As Witold Rybczynski describes it, “He was open to almost any career – except landscape architecture.”

The plot line of the first half of Olmsted’s life was a jagged and wandering one, but one recurring pattern was true: often a deus ex machina appeared, pointing out his next path in life. In this case the offstage direction came from Calvert Vaux, Olmsted’s old partner in designing Central Park.

Vaux wrote Olmsted over and over in 1865, pleading for him to come back to New York. Together they could work on a new park in Brooklyn. Together they could spearhead the movement for urban public parks in America. “Possible together, impossible alone,” is how Vaux put it. It was not immediate, but it happened: Vaux convinced him.

Almost by default, Olmsted was about to become a landscape designer. He would be one for the rest of his life. Olmsted’s gold mining, and his life in corporate management, would not be the story of his life. It would become just an odd chapter that was, fortunately for us all, now closed.