The Persistence of Olmsted’s Influence 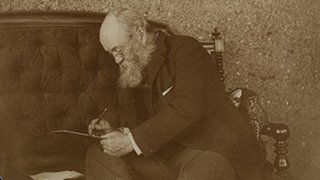 Frederick Law Olmsted, the man who made public parks an essential park of American life.National Parks Service Through the vast body of his firm’s work, Frederick Law Olmsted laid the foundation for a school of American landscape design whose principles and goals were closely aligned with his own. The origins of this school can be found in Olmsted’s first design, executed for Central Park collaboratively with Calvert Vaux in 1858, and traced through the second half of the nineteenth century as his influence spread through a scattered network of professional landscape practitioners. Few realize that it continued to guide American designs throughout the twentieth century.

Motivating Olmsted’s landscape designs was the notion that the natural or “present” character of a landscape should serve as a basis for its improvement. In formulating this principle, Olmsted followed Uvedale Price, Humphry Repton and others of the English school of the Picturesque. Repton’s book Sketches and Hints on Landscape Gardening opened with the statement: “All rational improvement of grounds, is, necessarily, founded on a due attention to the character and situation of the place to be improved.” At the end of his long life, Olmsted was still reflecting on this principle when he confided to his old partner Calvert Vaux, “The great merit of all the works you and I have done is that in them the larger opportunities of the topography have not been wasted . . . We have ‘let it alone’ more than most gardeners can.”[1]

Olmsted addressed this belief in many of his reports and essays. “The type of scenery to be preserved or created,” he noted in 1895, “ought to be that which is developed naturally from the local circumstances in each case.” He elaborated, “Rocky or steep slopes suggest tangled thickets or forests. Smooth hollows of good soil hint at open or ‘park-like’ scenery. Swamps and an abundant water supply suggest ponds, pools or lagoons.”[2] As to how to manipulate such elements into a cohesive design, Olmsted had been influenced by the approach to composition outlined in Uvedale Price’s Essay on the Picturesque (1794) and William Gilpin’s Practical Hints upon Landscape Gardening (1832). Olmsted’s methods had also been shaped by the American tastemaker Andrew Jackson Downing’s Treatise on the Theory and Practice of Landscape Gardening, which emphasized the principles of unity, harmony and variety.

The Picturesque compositions that structured Olmsted’s designs depended on massing plants for spatial definition. Olmsted had little interest in individual plant species and their characteristics, except insofar as they contributed to broadly composed scenes. He disliked bright floral displays, believing that jarring visual incidents, however horticulturally interesting, were exciting rather than calming and therefore destructive to tranquilizing scenes of beauty. The plantings throughout Central Park, particularly those defining the meadow edge and those throughout The Ramble, are prime examples of this approach.

By the turn of the twentieth century, many wealthy citizens were building new estates on the outskirts of cities and in scenic enclaves, accessible via rail lines, roads and waterways. The estates provided refuge from the increasing squalor of American cities, but they also carried ideological weight for their owners - members of a rising and culturally insecure plutocracy. Close communion with nature was believed to promote a wholesomeness impossible for the “depraved” population of cities. By this time, country life had also taken on an aura of nostalgia, a consequence of profound changes in the surrounding countryside, which was being developed at an increasing pace. Although more Americans still lived on farms than in cities in 1900, 20 years later the opposite would be true. As the nation became increasingly industrialized, the hold of the agrarian myth on its citizens became more tenacious.

The French hauteur of Newport, Rhode Island, which had been favored through the 1890s, lost appeal as other settings acquired specialized chic. Lenox, Massachusetts, attracted literary figures, while Bar Harbor, Maine, drew appreciators of rugged natural beauty. During the 1920s, Gatsbyesque types flocked to Long Island, while bohemian artists mixed with ranch owners in Montecito, California. Some country places were used as weekend retreats, some were occupied seasonally, and others functioned as primary residences – from Long Island, wealthy estate owners could yacht to work – but all were sited on properties, as the architectural historian Fiske Kimbell wrote, “free of the arid blocks and circumscribed ‘lots’ of the city, where one [could] enjoy the informality of nature out-of-doors.”[3]

In most cases, landscape architects, of whom there were growing numbers, were commissioned for the complex tasks associated with the design, building and planting of the new estates. These included advising on the purchase of property; siting the houses; creating general plans for the arrangement of the grounds ‒ including roads, bridle trails, bridges, formal and wild gardens, reflecting pools, fountains, terraces, bowling greens, golf courses, tennis courts, swimming pools, greenhouses, garages, barns, stables and worker cottages; designing and overseeing the construction of landscape features such as meadows, promontories and lakes; designing planting compositions; and locating nursery stock as well as supervising the installation of the plants. The era’s landscape practitioners, both men and women, considered themselves artists as well as business people, and they regarded the work they produced as fine art, of the same stature as painting, sculpture, and architecture.

Despite their Olmstedian roots, most American landscape architects – including Olmsted himself, in his final great work, Biltmore – came to recognize the spatial elegance and versatility of Beaux Arts design principles and integrated them into the new estate layouts. They saw that geometric forms (like walled gardens or allées) could accommodate a rich sampling of stylistic traditions and that such passages would satisfy the tastes of well-traveled clients. European borrowings also expressed a brash confidence in the right of American designers to appropriate foreign influences, a claim that had been forcefully articulated by the resplendent example of the Chicago World’s Fair in 1893. As the numbers of estates grew, so did the range and versatility of the ideas structuring them. Still, a fundamental regard for Nature – the “present” character of a landscape – continued to influence the designs of the new places. 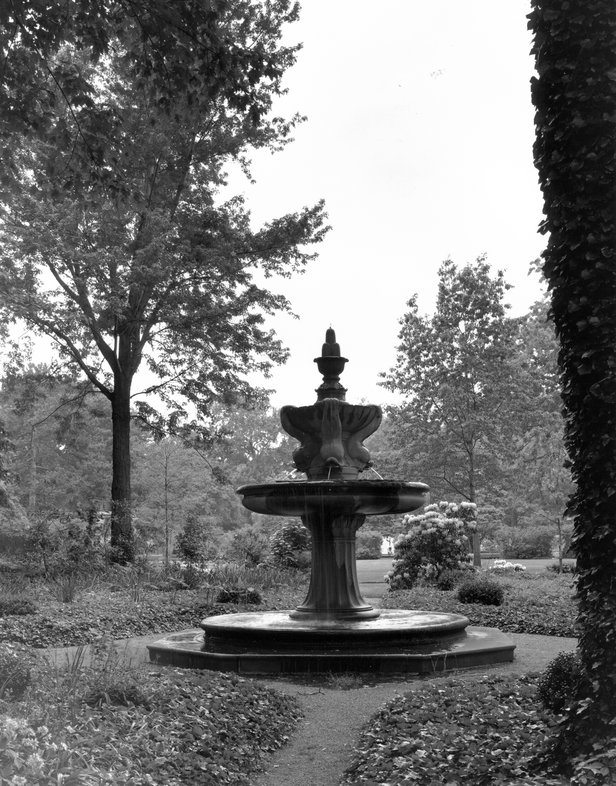 The c. 1906 work of Charles A. Platt (1861‒1933) at Gwinn, the Cleveland estate of William G. Mather, took its landscape design cues from the Georgian house. The lawns, formal gardens and even the curving seawall were laid out in proportion to the geometry of the architecture. Even so, Platt made Lake Erie the most prominent feature in the plan, embracing its roiling waters with the seawall and creating twin gazebos where the lake effects could be experienced close at hand. 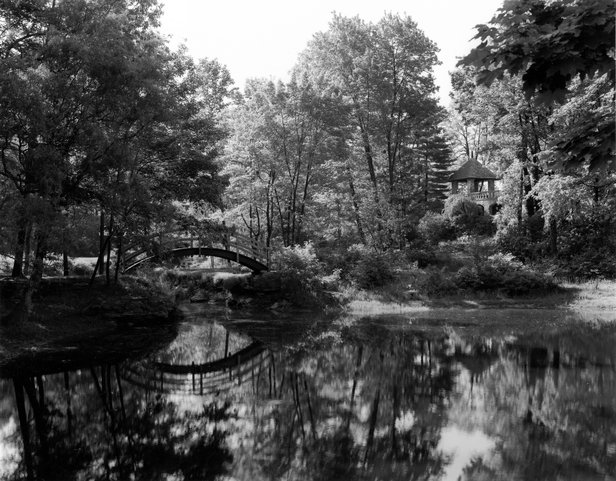 Bridge in wild garden on the grounds of Stan Hywett Hall.Carol Betsch

Warren H. Manning (1860‒1938) tended to respond even more directly than Platt to naturally occurring features in his design work, which included more than 1,500 projects in 45 states, a large percentage of which were country estates. Manning’s c. 1911 design for the grounds of Stan Hywet Hall in Akron, Ohio, featured long country views over the Cuyahoga Valley and a vast wild garden enlivened by a sinuous lagoon. 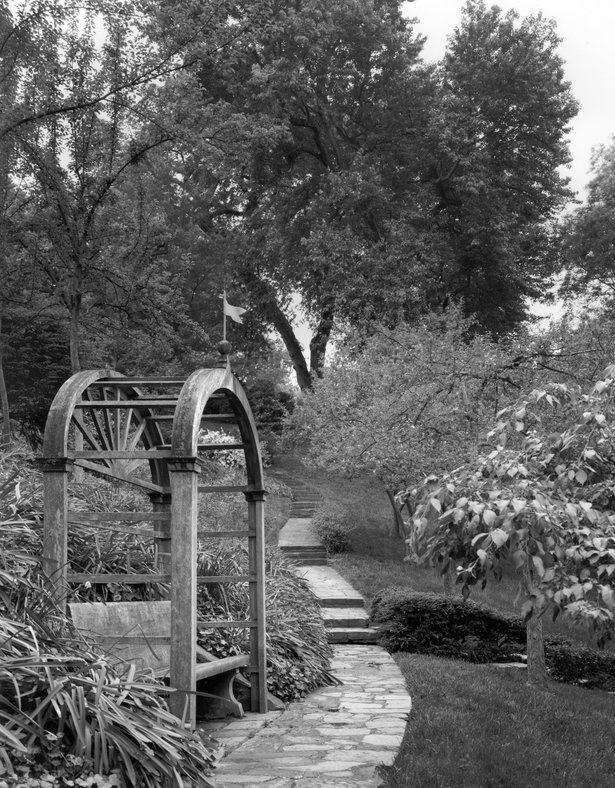 Beatrix Farrand (1872‒1959), well known for her Arts-and-Crafts approach, was also attuned to the rhythms of nature. In laying out the gardens of Dumbarton Oaks through the 1920s, she sited new walls and flights of steps in relation to towering trees, making sure that every garden room had a view over the park beyond, itself a great wild garden. 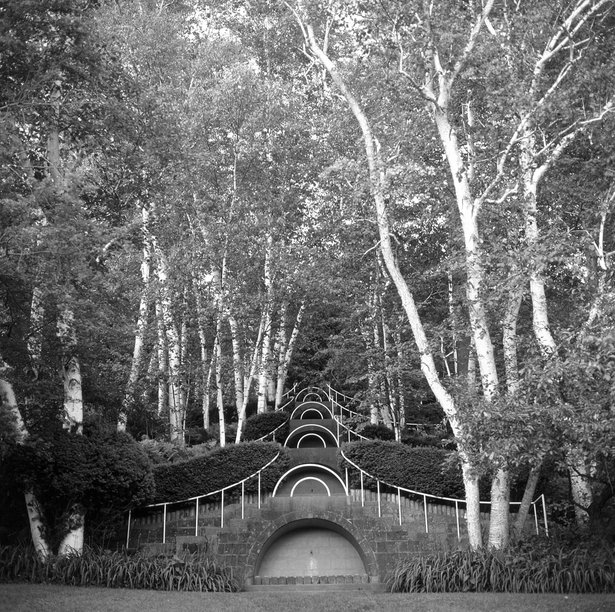 The Blue Steps at Naumkeag.Carol Betsch

Fletcher Steele (1885‒1971), who introduced French modernist gardens to American practitioners, never lost his connection to the guiding force of the genius loci. His new gardens at Naumkeag, in Stockbridge, Massachusetts, begun in 1926, were designed in relation to the dramatic topography and the great panoramas, which he framed with trees and, in one imaginative passage, the curve of the ground itself.

Even as they integrated stylistic influences that kept pace with their clients’ and their own evolving tastes, twentieth-century American landscape architects, from Charles Platt to Warren H. Manning, Beatrix Farrand, and Fletcher Steele, continued to respond to nature in their designs, in the tradition of their predecessor Olmsted. In laying out new estates, they planted trees suggestive of the forests that once covered much of the continent. They dammed streams to create lakes. They framed striking vistas – to mountains, oceans, and tree-covered countryside – from sites chosen for such potential. These designs were the products of an inquiring, experimental spirit supported by an organizing regard for the spirit of the place, a principle that continued to guide American practitioners throughout the country place era, and in some measure informed their best work.

To learn more about the great estates, read A Genius for Place: American Landscapes of the Country Place Era by Robin Karson (University of Massachusetts Press in association with Library of American Landscape History). lalh.org/a-genius-for-place-paperback-edition/.

For information on the exhibition A Genius for Place, visit lalh.org/exhibitions/a-genius-for-place/.

To watch Fletcher Steele and Naumkeag: A Playground of the Imagination, visit lalh.org/films/fletcher-steele-and-naumkeag-a-playground-of-the-imagination/

Robin Karson is the founder and executive director of the Library of American Landscape History.  She is the author of Fletcher Steele, Landscape Architect: An Account of the Garden Makers Life, 1885-1971 and A Genius for Place: American Landscapes of the Country Place Era.