The Richardson Olmsted Complex: Landscape's Contribution to Well-Being from the Nineteenth through the Twenty-First Centuries

Frederick Law Olmsted was in the right place at the right time. In 1869, he was invited to be a guest of influential Buffalo businessman and politician William Dorsheimer at the newly established Buffalo Club. The third guest at the table was architect Henry Hobson Richardson.[i]

When, a few months later, Buffalo won the bid to build the Buffalo State Asylum for the Insane,[`ii] later renamed the Buffalo State Hospital, Olmsted and Richardson were directly involved in the development of the site, the former as landscape architect, and the latter as building architect. The site’s 203 acres of untouched farmland was recognized as one of the facility’s major assets.

The facility was purpose-built, designed to provide an uplifting setting for individuals whose mental challenges led to their removal from society. 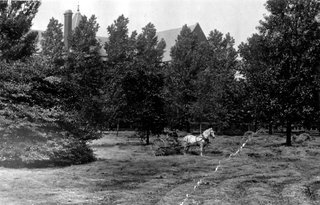 The landscape was an integral part of treatment. Patients farmed and enjoyed the pastoral grounds designed by Olmsted and Vaux.Buffalo Psychiatric CenterWithin treatment plans for patients, include outdoor activities in natural surroundings: this core principle of psychiatrist Dr. Thomas Kirkbride, upon whose philosophy the asylum’s treatment program was developed, meant that landscaping of the grounds was central, rather than peripheral, to the overall plans for the asylum. The complex – indoors and out – was intended to be a place of respite, a sanctuary from the world, within which to heal.

Frederick Law Olmsted and his partner, Calvert Vaux, were employed to serve as consultants for the grounds of the hospital. Likely, two completely separate reasons may have influenced the obtaining of this commission. One reason may have been based in the friendship Olmsted had with Henry Hobson Richardson and William Dorsheimer. The other may have been prior experience: Olmsted and Vaux (separately or together) previously planned the grounds for three mental hospitals.

The original 1871 sketch that accompanied the report from Olmsted and Vaux illustrated curved roadways around the major structure, with “pastured pleasure ground” 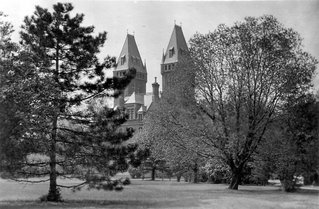 The out-of-doors offered tranquility to patients and their visitors and offered a place of respite and sanctuary from the world.Buffalo Psychiatric Center in front and separate gardens for male and female patients close to the structure, on the north side. Half of the original 203 acres were dedicated to farmland. The asylum’s proximity to the Buffalo Parks System, as well as to Forest Lawn Cemetery, meant that the northern portion of Buffalo was a nineteenth century green space.

In designing the landscape for the asylum, Olmsted and Vaux carefully planned their message: plantings, drives, and experiencing the out-of-doors could offer tranquility to patients and their visitors. The curving roads seen within their other garden settings (Buffalo City Parks, Central Park, Prospect Park) remain clearly visible. The imagination was always able to bring back the options that this landscape provided for patients, but the actual grounds deteriorated over the decades.

Rebirth of Olmsted’s vision of the South Lawn

The facility closed the door to its last patient in 1974, and (other than brief usage by the Office of Mental Health, 1989-1994) remained vacant. For several decades, the landscape lost its prominence. Parking lots supplanted part of a gracious lawn in front of the building. When the Richardson Center Corporation was established in 2006, hope for an innovative use of the facility emerged.

2013 began a fresh era in the life of the facility, when the newly designed South Lawn was officially opened to the public. Designed as a 9-acre distinctive gateway and a friendly public green space, it is part of the first phase of development of the Richardson Olmsted Complex, which will renovate the three center buildings into a hotel, conference and event space, and the Buffalo Architecture Center. Andropogon Associates of Philadelphia, PA, internationally recognized for ecologically based landscape architecture, completed the South Lawn redesign.

Instead of approaching the South Lawn project entirely anew, the designers continually returned to this question: “What would Olmsted do now?” The South Lawn showcases state-of-the-art sustainable construction practices by recycling asphalt, stone and soil on site, thereby reducing construction waste in landfills and roadway congestion and pollution for transportation.

South Lawn landscape was renewed in 2013, transforming 9 acre entry from 150 parking spaces to a pastoral Olmstedian green space.Joe Cascio The plan integrates changes recommended by the public at several stages of design development. “While the South Lawn landscape is referential to Frederick Law Olmsted, it is now a new, exciting place that is concurrently reflective of our history,” said Monica Pellegrino-Faix, executive director of the Richardson Center Corporation. “The South Lawn signals the start of our redevelopment of this iconic site, creating a welcoming gathering place to have a picnic, take a walk, or enjoy an event,” said Kelly Hayes McAlonie, Richardson Center Corporation board member and Chair of the South Lawn Landscape Committee.

As Mark Sommer, reporter for TheBuffalo News, described it,[iii] the South Lawn was transformed as a result of this project. “The $5 million project reverses decades of neglect… [Now], a curvy, graveled path, framed by small blocks of granite cobblestone and met by native plantings, encircles a nine-acre green space.  Benches, old-fashioned streetlights, a Medina sandstone pedestrian bridge and a meadow all add to the bucolic ambience in a place where respite and recreation beckon.” 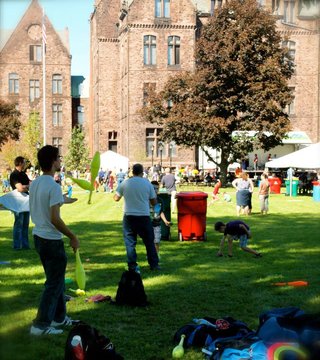 The renewed South Lawn is enjoyed by the community.Barbara Campagna Sustainability at the core of the renovation

Sommer gave readers of TheBuffalo News a vivid description of the care taken to maintain “sustainability as a guiding principle. The gravel from the torn-up parking lots was reused in granulated form, and stone and soil were also recycled. Rain gardens, including one by the bridge, were created to capture rainwater. Some 125 trees, which are expected years from now to provide a dense canopy along Forest Avenue and elsewhere, were planted.”

In a recent interview, Chris Mendel, landscape architect with Philadelphia-based Andropogon Associates, describes the approach in this way: “This reconfiguration of Olmsted’s design builds on his core values. True to Olmstedian form, the plants and landform do more than just decorate, they filter water from streets, bank it to support a unique variety of water-loving plants, block winds, and play with light and shadow upon the grounds through all seasons.”

Bringing together the old and the new

Mendel observed, “Olmsted designed the grounds to be bucolic on one side and functional and productive on the other… The Richardson Olmsted Complex is just one of over eighty of his works, but it is among the most keenly focused of his attempts to marry emotional/psychological concepts to physical form.”

It is easy for visitors to identify the centuries-old trees that predate the building of the Complex: they extend their branches majestically. The use of the South Lawn by community members, neighbors and visitors from around the world would have made all involved in this site, for over 140 years, very proud. Frederick Law Olmsted’s legacy is in good hands.

[ii] The modern connotations for “asylum” are negative, but Merriam-Webster defines “asylum” as “an inviolable place of refuge and protection” and “a place of retreat and security.”

Sharon F. Cramer, Ph.D., SUNY Distinguished Service Professor Emerita, has served as a docent at the Richardson Corporation Complex since 2013. Her scholarly interests have included leadership, governance, collaboration and special education. For 26 years, she was a faculty member at SUNY Buffalo State, and officer of local, state and national organizations; she currently is Parliamentarian of the SUNY University Faculty Senate.