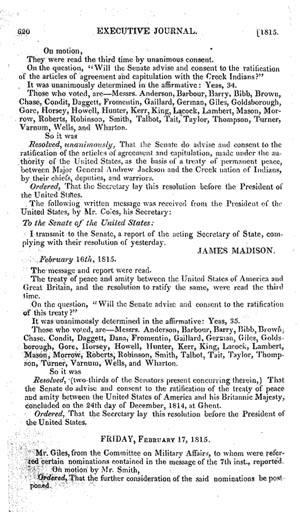 The War of 1812 DVD
The Treaty of Ghent copy

Thought Provoking Questions about the Treaty of Ghent

Assessment Tasks
Students should display appropriate participation in the open dialogue taking place during the brainstorming period along with sharing correct answers while looking at the actual Treaty of Ghent.

The Laws Live On
Examine the content of the U.S. Constitution, the Bill of Rights and Napoleon's civil code on France. Consider the strongest parts of each, and draft a new governing document.
www.pbs.org/empires/napoleon/n_clas/lawsliveon.html

The “Failed Peace”
Investigate why it was impossible to achieve a lasting peace after the end of fighting in the Great War. Research how propaganda swayed delegates against a "peace without victory," and create "pro-treaty" propaganda posters or speeches.
www.pbs.org/greatwar/resources/lesson7.html 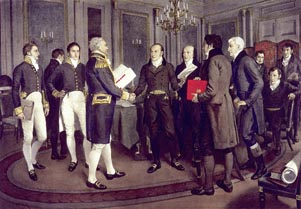 The signing of the Treaty of Ghent 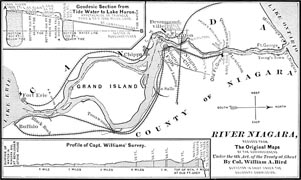 Land discussed in the Treaty of Ghent

Symbolic representation of the Treaty of Ghent