• identify location, length, and resources used for certain battles of the War of 1812

1. After viewing the battle segments from The War of 1812, the teacher will ask the students to recall details of the battles from the program.
2. As the students recall and list battle details, the teacher will write the information on the board for the class to view.
3. The teacher will then distribute the Battle Map Creation handout to the students. The teacher will read over the handout with the students and explain thoroughly the expectations of the assignment.
4. The teacher will place students in heterogeneous pairs to work together.
5. The teacher will allow students access to computers to research the battle of their choice. (If students do not have computer/internet access, the instructor should pre-print maps for the student to choose from).
6. Students will be directed to search for any additional information they can find on the battle they chose. (Resources may include The War of 1812, the Internet, or reference books).
7. The students will then decide how they want to create their maps. They can choose a two- or three-dimensional representation.
8. The students may bring in craft supplies from home and/or use teacher-provided supplies.
9. The teacher should continue to guide and encourage students throughout the map-making process.
10. Upon completion of the map, the student pairs will be directed to write a summary of their battle maps.
11. Students will hand in their maps and summaries, which can be put on exhibit in the library or classroom.

Assessment Tasks
Students will complete and turn in a battle map on the War of 1812. Students will write a summary of the battle which they created by using the focus questions of the lesson and attach it to their battle map.

The Union’s “Grand Strategy"
Interpret a map highlighting the "Grand Strategy" of the Union designed by General McClellan. Research the various provisions in the strategy to form conclusions about its strengths and weaknesses.
www.pbs.org/civilwar/classroom/lesson_grand_strategy.html

Factors That Handicapped the British
Examine some of the mistakes and misjudgments made by the British that led to the failure to win the Revolutionary War. Compare this surprising defeat to other military conflicts in history.
www.pbs.org/ktca/liberty/tguide_4.html

Battle of the Bulge
Describe the military situation in the European Theater in late 1944 and investigate the Battle of the Bulge from both American and German points of view. Write a mock letter home as either an American or German soldier on the front lines.
www.pbs.org/thewar/downloads/bulge.pdf 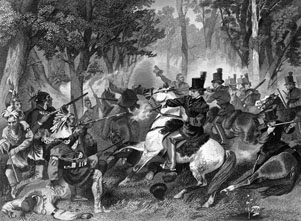 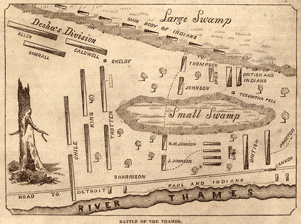 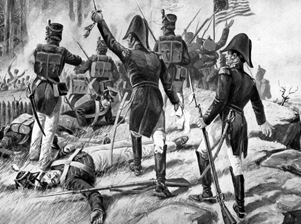