Personal Journals from the War of 1812

For some of the participants in the War of 1812 the conflict was the defining moment of their lives, and they were well aware of it.  A number of young soldiers penned brief diaries and journals that show how the war began for them as an adventure, but ended in many cases with injury, imprisonment and grief. For women, too, the war was a trial, a test of their fortitude and resourcefulness, but it was also a window onto a wider world.  Their journals in turn have become our window onto a war that took place two centuries ago. 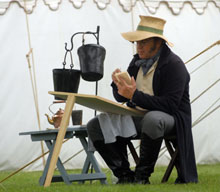 The substantial first-person record of the war comes primarily from the educated classes – officers and their wives.  Two exceptions to this are the excellent memoirs written by of the British foot solider, Shadrach Byfield, and the American militiaman, William Atherton.  Their experiences encompass the full experience of war – battles, injuries, imprisonment and aftermath.

Most of the journals were written by men, but several diaries and letter collections from women survive, notably of Mrs. Josiah (Lydia) B. Bacon, wife of the U.S. Lieutenant and Quartermaster Josiah Bacon.  Her graphic description of the assault on Fort Detroit is featured in the documentary.  The more famous quotes are from first lady Dolley Madison, whose letters to her sister, Lucy, are the basis for her well-known account of the burning of Washington.  Herein are selections from the journals and correspondence of some who fought in the war or observed it at close hand.

Anne Prevost Anne was a daughter of General Sir George Prevost, Governor General of the British forces in Canada.  At seventeen she was a faithful journal keeper, and she made almost daily entries during the time her father was prosecuting the war.  In her entry of June 25, 1812 she provides insight into how a young British subject in Canada would react to news of the declaration of war:

“I was summoned in the midst of my French lesson to hear some news that had arrived. It was indeed an important piece of intelligence:–'America has declared War against England.' The news had arrived by an Express to some of the Quebec merchants. ...On this day I saw nothing before me but my Father's honour and glory. Although I knew how small a force we had to defend the Canadas, such was my confidence in his talents and fortune, that I did not feel the slightest apprehension of any reverse. I thought those abominable Yankees deserved a good drubbing for having dared to think of going to War with England, and surely there was no harm in rejoicing that the War had happened during my Father's Administration, because I thought he was the person best calculated to inflict on the Yankees the punishment they deserved."

Anne Prevost was not much younger than the law student John Beverly Robinson, who was clerking with Attorney General of Canada, John MacDonnell, when the war broke out. MacDonnell was killed in the Battle of Queenston, and Robinson, at the age of 21, was named acting Attorney General, although he was not yet officially a lawyer.  Robinson witnessed the fall of Fort Detroit and later the death of Brock at the Battle of Queenston.  Remembering that morning he wrote:

“From our battery there we had the whole scene most distinctly in our view. Day was just glimmering. The cannon from both sides roared incessantly, shells were bursting in the air, and the side of the mountain above Queenston was illumined by the continual discharge of small arms. The last circumstance convinced us that some part of the enemy had landed; and in a few moments, as day advanced, objects became visible, and we saw numbers of Americans in boats attempting to land upon our shore, amidst a shower of shot of all descriptions, which was skillfully and incessantly levelled at them.”

The British and Canadian militia were aided at Queenston by the Mohawk chief John Norton.  Norton was born in Scotland to a Scotswoman and a Cherokee Native who had joined the British army.  While serving with the British in Canada, John Norton deserted, became a trader and eventually was drawn into the Six Nations of the Grand River Iroquois.  The Mohawk Chief Joseph Brant employed Norton as an interpreter and eventually groomed him as his successor.  His knowledge of both British and Native ways, his military background, and his natural charisma made him a powerful warrior.  Norton, who had been well educated in Scotland as a child, wrote an account of his experiences in North America, including full reports of his participation as a Native leader in major battles of the War of 1812.

“As we began to move forward, we heard the firing commence at Snake Hill.  Hastening forward, through the Darkness of the night & closeness of the Woods, we separated from a numerous Division of our Men, which constrained us to check our speed at a point of Rendezvous previously appointed, until they had joined us.  We were within a half mile of Fort Erie, when we heard the cracking of musketry and the roar of cannon announce the attack upon it.  We then ran forward as fast as the woods and darkness would permit, stumbling over logs and fallen trees.  We passed the reserve drawn up in a ravine, running against the fire to the Glacis, as we arrived there, the explosion blew the broken fragments of buildings and works in all directions, it appeared to create a general confusion.  We met the troops retiring from the fort which they had gallantly entered.  We saw none advancing.  Our own number was nothing when compared to the host of foes which opposed us.  After hesitating a little while, we retired with others to the ravine, on the summit of which we waited, until the whole of our troops had retired.  The enemy did not come out of his works, but continued firing round shot, grape shells and musketry.  We left them there and followed our friends, enraged at their misfortune.”

Though many of the journals from the war recall horrific events, one stands out for its lighthearted tone.  John Pendleton Kennedy was the privileged son of an elite Baltimore family.  Unlike most young men of the time, he graduated from college in 1812, then directly joined the Maryland Militia.  “What a glorification this afforded to me!” he writes about his time at Fort McHenry.

“Here I was, just out of college, in a very dashy uniform of blue and red, with a jacket and leather helmet, crested with a huge black feather, and surmounted by a particularly limber and, as I thought, graceful red one, with my white cross-belts, pure as pipe-clay could make them, my cartridge–box and bayonet, and a Harper’s Ferry musket of fourteen pounds, white drill pantaloons (blue in winter), with black gaiters.  There I was, eighteen years of age, knapsacked, with blanket, canteen and haversack (generally a cold fowl, biscuit, fried tongue and bottle of wine in it), and detailed for a week’s duty at the fort.  Talk about luxuries!  I have had a good share of what goes by that name in my lifetime, but I have never had since any thing in that way that might be compared with the nights in the guardroom, and the routine of the sentinel’s duty in weather wet or dry, and in moonlit and moonless midnights, to which I have been detailed at Fort McHenry.”

Kennedy carried dancing shoes in his pack, hoping for a grand party at the White House. William Atherton, the Kentucky farm boy, carried his rifle, and spent more than a year in cold and hungry captivity.  A British counterpart, Shadrack Byfield, a weaver from Wiltshire, buried his own arm in a coffin in the soil of Upper Canada before returning home.

Byfield, Shadrach, A Private's Experience in the War of 1812
Transcribed from the original document by James Yaworsky from the Byfield manuscript as printed in John Gellner, editor, Recollections of the War of 1812. Three Eyewitness Accounts, Toronto, Baxter Published Company, 1964
The 41st Regiment of Foot 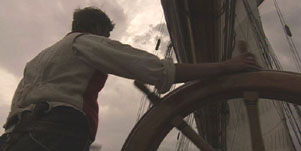 Re-enactor at the helm of the USS Niagara 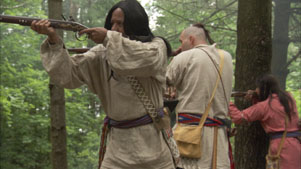 Re-enactor at the helm of the USS Niagara.