Military captives in the War of 1812 posed a particular problem for both sides. Neither the British nor the Americans could maintain large prisons – they lacked the military facilities and the manpower to hold soldiers for long periods of time. And, in a war that stretched along half of North America, prisoners posed a logistical nightmare – prisoners taken in battle were often hundreds of miles away from the nearest military garrison. The British often paroled captured militiamen and army officers, releasing them after they’d made a pledge to stay out of the war for the duration. Regular troops and militia officers were not paroled; they were imprisoned and often kept in filthy, vermin-ridden barracks, with inadequate food and almost no medical care. The American prisoners usually ended up in Quebec, the British were sent deep into US territory. Both were used as bargaining chips for the exchange of prisoners.

One of the first prisoners taken in the War of 1812 was the hapless artillery Lieutenant Porter Hanks, commander of Fort Mackinac. The fort was a strategic target, perched as it was on an island in the strait that connected Lake Huron with Lake Michigan. But it was also a remote outpost. Lt. Hanks had no idea that the war had begun when, on July 17, a force of more than five hundred British soldiers and Native allies descended from the hills around the fort and demanded its surrender. Hanks had but two choices: annihilation or capitulation. Not surprisingly, he chose the latter and became a prisoner.

Hanks was paroled back to the United States with the stipulation that he not fight again. He was held at Fort Detroit, where he was facing a court martial for his surrender of Mackinac. While waiting there for a military tribunal to convene, the British forces under General Isaac Brock attacked the fort. A cannonball ripped through the room where Hanks was standing, cutting him in half and killing the officer next to him as well.

During the War of 1812 the British seized over twenty thousand American seamen and imprisoned them in Canada, South Africa and England. Thousands were banished to Dartmoor, an infamous prison on the bleak moors of Devonshire, seventeen miles inland from Plymouth.

From the spring of 1813 until March 1815 – three months after the war’s end – the cold stone fortress admitted more than 6500 American sailors; about fifteen percent were the black crews of privateers that had been plundering British merchants off the coasts of England and Europe.

British soldiers patrolled the walls and gates, but the day-to-day running of the prison was controlled by the prisoners themselves. They had their own courts and punishments, markets and laundries, casinos and churches, all governed by a system of committees. Barracks Number 4 was an exception. There, self-styled King Dick, a 6’4” black sailor from Maryland, ruled with an iron fist. According to prison journals, he swaggered through the prison with a large club in his hand, followed by two, good-looking “white lads,” whom he dressed in fine clothing. King Dick might have been something of a dictator, but Number 4 barracks was, by all accounts, the safest, cleanest and best-run barracks at Dartmoor. Recreation included boxing, fencing, dancing and music lessons. There were white and black dramatic troupes; according to reports the most popular productions were the black theatrical presentations of Othello and Romeo and Juliet .

But Dartmoor was, after all, a prison, and daily life held its share of misery and pain. Floggings were common, meted out for theft and other infractions. Illness, particularly food poisoning, exposure and infection, were rampant. Two hundred seventy Americans died there, mostly from pneumonia and smallpox. The prisoners barely tolerated the horrid conditions until they learned of the peace treaty. When their treatment did not improve, they began a campaign of complaints and protests.

On April 6, 1815 the British guards, fearing an escape attempt, fired on a large group of unarmed prisoners in a barracks yard. The men, who had been gambling and milling about, scrambled madly for safety but could not evade the indiscriminate rain of bullets. Seven prisoners died, thirty-one were wounded. One of the dead was Thomas Jackson, just fourteen years old.

The massacre at Dartmoor Prison prompted the British and American authorities to speed up the repatriation process. Some of the last to leave were about 450 black prisoners who, perhaps wisely, would not get on any ship bound for a southern port of the United States. The horrors of Dartmoor were preferable to the prospect of slavery. King Dick managed to gain a berth on a ship bound for Boston, Massachusetts, where he would not be king, but he would be free. 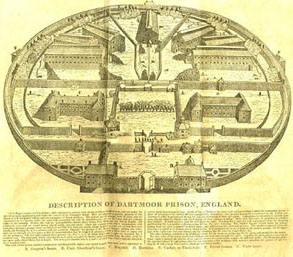 An illustration of the Dartmoor Prison in Devonshire 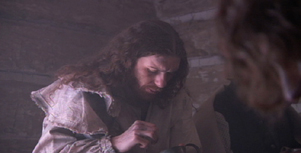