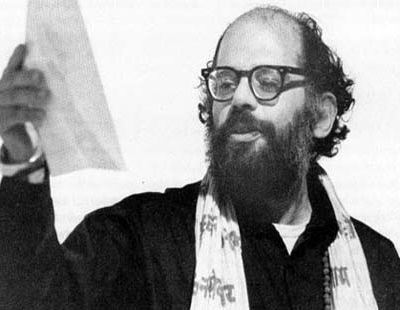 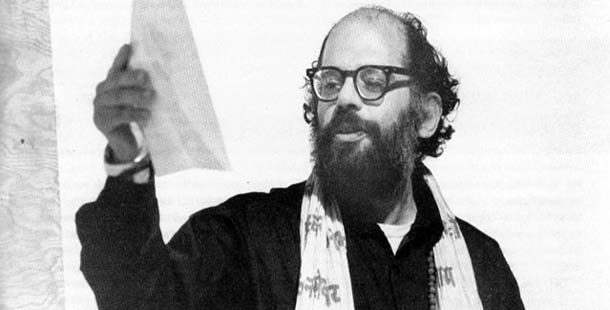 “I saw the best minds of my generation destroyed by madness, starving hysterical naked,
dragging themselves through the negro streets at dawn looking for an angry fix,
angelheaded hipsters burning for the ancient heavenly connection to the starry dynamo in the machinery of night, who poverty and tatters and hollow-eyed high sat up smoking in the supernatural darkness of cold-water flats floating across the tops of cities contemplating jazz”
– excerpt from “HOWL”

Allen Ginsberg, the visionary poet and founding father of the Beat generation inspired the American counterculture of the second half of the 20th century with groundbreaking poems such as “Howl” and “Kaddish.” Among the avant-garde he was considered a spiritual and sexually liberated ambassador for tolerance and enlightenment. With an energetic and loving personality, Ginsberg used poetry for both personal expression and in his fight for a more interesting and open society.

Allen Ginsberg was born in Newark, New Jersey on June 3, 1926. As a boy he was a close witness to his mother’s mental illness, as she lived both in and out of institutions. His father, Louis Ginsberg was a well-known traditional poet. After graduating from high school, Ginsberg attended Columbia University, where he planned to study law. There he became friends with Jack Kerouac and William Burroughs. Together the three would change the face of American writing forever.
Ginsberg

With an interest in the street life of the city, Kerouac, Ginsberg and Burroughs found inspiration in jazz music and the culture that surrounded it. They encouraged a break from traditional values, supporting drug-use as a means of enlightenment. To many, their shabby dress and “hip” language seemed irresponsible, but in their actions could be found the seeds of a revolution that was meant to cast off the shackles of the calm and boring social life of the post-war era. While a nation tried desperately to keep from rocking the boat, Allen Ginsberg and the Beats saw the need for a more vibrant and daring society.

One of the primary first works of the Beats was Ginsberg’s long poem “Howl.” In an age plagued by intolerance, “Howl” (1956) was both a desperate plea for humanity and a song of liberation from that intolerant society. Ginsberg’s use of a gritty vernacular and an improvisational rhythmical style created a poetry which seemed haphazard and amateur to many of the traditional poets of the time. In “Howl” and his other poems, however, one could hear a true voice of the time, unencumbered by what the Beats saw as outdated forms and meaningless grammatical rules.

For its frank embrace of such taboo topics as homosexuality and drug use, “Howl” drew a great deal of criticism. Published by City Lights, the San Francisco based publisher of many of the Beats, the book was the subject of an obscenity trial. Eventually acquitted of the charges, City Lights came out with Ginsberg’s second book in 1961. “Kaddish, And Other Poems,” often considered Ginsberg’s greatest work, dealt again with a deep despair and addressed Ginsberg’s closeness with his mother while she was hospitalized and fighting insanity. The raw nature of the subject matter and Ginsberg’s desperate emotions found a perfect home in his poem “Kaddish.” Of “Kaddish,” Ginsberg wrote “I saw my self my own mother and my very nation trapped desolate…and receiving decades of life while chanting Kaddish the names of Death in many mind-worlds the self seeking key to life found at last our self.”

Throughout the 1960s, Ginsberg experimented with a number of different drugs, believing that under the influence he could create a new kind of poetry. Using LSD, peyote, marijuana and other drugs he attempted to expand his consciousness and wrote a number of books under the influence including the “Yage Letters” with William Burroughs. For much of the youth of the day, Ginsberg’s embrace of illegal drugs and unrestrained sexuality made him a central figure in the rebelling movements of the time. More than any other American poet of the 20th century, Ginsberg used his popularity for social change. Coining the phrase “flower power,” Ginsberg encouraged protesters of the 1960s to embrace a non-violent rebellion. By the 1970s, his fame had grown enormously, and though he cast aside drug use for an interest in Buddhism and yogic practices, he remained important to newly-formed youth movements.

By the 1980s, Ginsberg was the most famous living American poet. As a writer he continued to publish challenging and personal verse and as a celebrity he maintained an international presence as a spokesperson for peace and tolerance—working often as a teacher and lecturer . In the last decade of his life, Ginsberg wrote and performed at the prolific rate of his youth. He had sold millions of books and had often expanded into other genres. Among the collaborators of his final years were members of the bands Sonic Youth and U2. He died on April 5, 1997 at the age of seventy. At the time of his death, “Howl” had been reprinted more than fifty times, and the words of William Carlos Williams’ introduction still rang true—”This poet sees through and all around the horrors he partakes of in the very intimate details of his poem. He avoids nothing but experiences it to the hilt. He contains it. Claims it as his own—and, we believe, laughs at it and has the time and affrontery to love a fellow of his choice and record that love in a well-made poem.”