Carl Sandburg
Poet, Writer
(Jan 6, 1878 - Jul 22, 1967)
KNOWN FOR
Poetry collections including Chicago Poems; Good Morning, America; and The People, Yes.
QUOTE
""Poetry is the opening and closing of a door, leaving those who look through to guess about what is seen during the moment.""
AMERICAN MASTERS FILM
The Day Carl Sandburg Died
(Sep 2012)
Directed by Directed by Paul Bonesteel 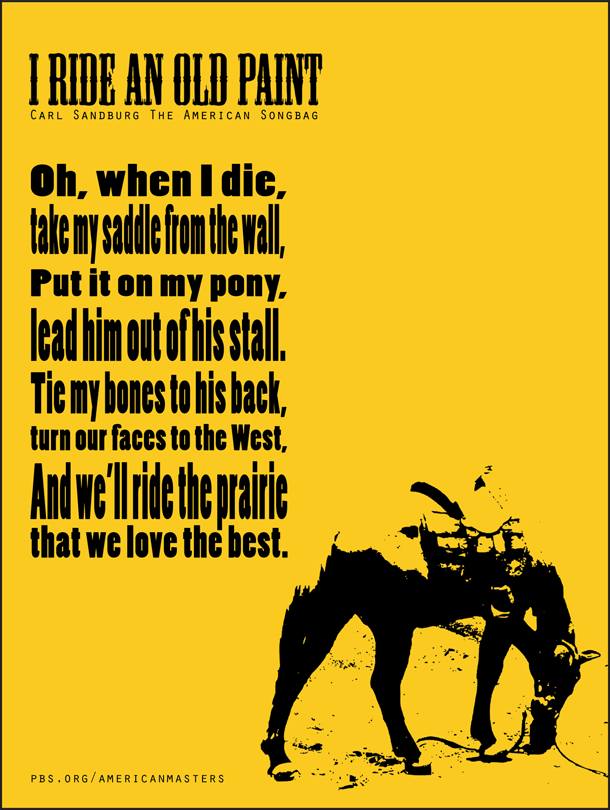 “The song smells of saddle leather, sketches ponies and landscapes, and varies in theme from a realistic presentation of the drab Bill Jones and his violent wife to an ethereal prayer and cry of phantom tone.”
—Carl Sandburg on “I Ride an Old Paint,” from The American Songbag

Hear Carl Sandburg sing, “I Ride an Old Paint,” recorded in the 1930s. The song was collected and published by Sandburg in The American Songbag, a decade earlier. The Songbag was one of the early, great catalogs of American music.

Traveling the American Southwest, Sandburg found “Old Paint” by way of Margaret Larkin, a poet and singer from Las Vegas, and Linn Riggs, a poet and playwright from Oklahoma. The story goes, as Sandburg wrote, “The song came to them at Santa Fe from a buckaroo who was last heard of as heading for the Border with friends in both Tucson and El Paso.”

Sandburg described the song as a man lovesick for his country’s roots: “There is rich poetry in the image of the rider so loving a horse he begs when he dies his bones shall be tied to his horse and the two of them sent wandering with their faces turned west.”

“I Ride an Old Paint” by Carl Sandburg

Carl Sandburg’s The American Songbag was published in 1927.