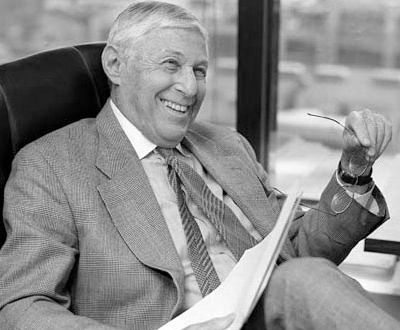 Don Hewitt
Journalist
(Dec 14, 1922 - Aug 19, 2009)
KNOWN FOR
CBS News programs Douglas Edwards with the News, CBS Evening News with Walter Cronkite, and 60 Minutes.
QUOTE
"Confrontation is not a dirty word. Sometimes it's the best kind of journalism as long you don't confront people just for the sake of a confrontation."
AMERICAN MASTERS FILM
Don Hewitt: 90 Minutes on 60 Minutes
(May 1998)
Directed by Susan Steinberg 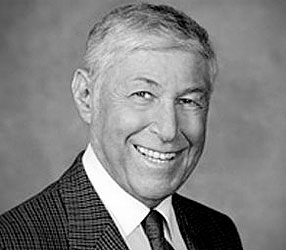 In 1968, CBS News forever changed the face of broadcast journalism with the premiere of 60 MINUTES. It was a revolution in television programming created by veteran newsman Don Hewitt (1922 – 2009). 60 MINUTES was the first news program to break into the Neilsen’s Top ten, and has been the highest rated public news program for more than thirty years. At the age of seventy-seven Hewitt continues to produce the show and is a major influence on broadcast news.

Born in 1922 in New York City, Hewitt left New York University after one year to pursue a career in journalism. His first job was as a copy boy with THE NEW YORK HERALD TRIBUNE. From 1943 to 1945 Hewitt was a war correspondent in both the European and Pacific theaters. After the war, he worked as an editor for the Associated Press’ Memphis bureau, and remained in publishing until 1948. It was then that Hewitt began his long-term association with CBS News, as an associate director of DOUGLAS EDWARDS WITH THE NEWS. He continued with the show for fourteen years as both a producer and director.

In the early sixties Hewitt played a pivotal role in framing politics for a growing television audience. He directed and produced the now famous first presidential debate between John Kennedy and Richard Nixon. Around the same time he became the executive producer of CBS EVENING NEWS WITH WALTER CRONKITE. Within these many positions, Hewitt advanced the art of news broadcasting. Among his most influential contributions was the appropriation of the lower half of the screen for printed information. He created a more savvy generation of news “anchors” (a term coined by Hewitt), through his use of cue cards and multiple filming angles. It was this redefinition of the role of the news anchor that opened up the field for Hewitt’s major contribution.

In 1968 Hewitt created the first newsmagazine, 60 MINUTES. Using multiple anchors, each concentrating on a separate story, the program worked to provide in-depth coverage on a number of different topics. Unlike the nightly news, 60 MINUTES had the time to provide both the history and editorial commentary on the issues at hand. Having a greater leeway with the timeliness of their articles, 60 MINUTES could tackle systemic social and political issues in a way that had only been done before in print. This mixture of up-to-date reporting and extensive investigation gave 60 MINUTES an aura of knowledge and respectability previously unseen on television. In its first ten years the show rocketed to the top of the Neilsen ratings and remains there to this day.

Throughout the years, Hewitt has received every honor that can be given to a man in his position. The winner of eight Emmys, he was awarded the Founders Emmy by the International Council of the National Academy of Television Arts and Sciences in 1995. He has been honored by nearly every major university journalism program, including Columbia, the University of Missouri, Brandeis, and the University of California at Berkeley. Though Hewitt has remained out of the public eye for most of his career, his innovative spirit is at the core of much of the news that informs the country. His tireless pursuit of fair and effective reporting has led him into continued experimentation with the forms of broadcast news. His innovations have had countless effects on how the news is both reported and viewed. If imitation is the highest form of flattery, then one need only to turn on the television to understand how highly America thinks of Don Hewitt.