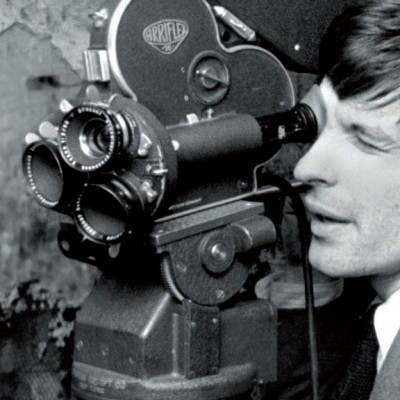 John Cassavetes
Filmmaker
(Dec 9, 1929 - Feb 3, 1989)
KNOWN FOR
Cinema verité techniques. The films A Woman Under the Influence, The Killing of a Chinese Booking, Gloria
QUOTE
""I'm dreaming of a white Christmas" (from the song he made famous, but did not write, "White Christmas")"
AMERICAN MASTERS FILM
John Cassavetes: John Cassavetes
(Jul 1990)
Directed by Deborah Geller

John Cassavetes was born in New York City on December 9th, 1929. After graduating from high school, he attended Mohawk College and Colgate University before graduating from the New York Academy of Dramatic Arts in 1950. Throughout the early 1950s he worked as an actor in films including FOURTEEN HOURS (1951) and TAXI (1953). By the late 1950s he had made a name for himself, with roles in a number of movies including 1958’s SADDLE THE WIND. His big break came with a regular role on the television series “Johnny Staccato” between 1959 and 1960.

Financing his first film with the money he had made in television, Cassavetes embarked on his directorial debut. Working from only a skeleton script, SHADOWS was an experiment in improvisational acting and directing. A low-budget sixteen millimeter production with a jazz soundtrack by Charles Mingus, the film appealed to an audience longing for less mediated art forms.

Winning five awards from the Venice Film Festival, Cassavetes found himself suddenly in the position of making higher-budget films within the studio system. In 1961 he made TOO LATE BLUES followed in 1962 by A CHILD IS WAITING, but neither had the excitement or improvisational energy of SHADOWS. Resentful of studio interference in his work, Cassavetes went back to acting, appearing in a number of films including THE KILLERS (1964), THE DIRTY DOZEN (1967), and ROSEMARY’S BABY (1968). By 1968, however, Cassavetes returned to directing, this time working independently.

FACES, a film about the difficulties in a suburban marriage, continued in the vein of SHADOWS, with a loosely drawn script and cinematography that worked in response to the improvised method of the actors. Though some found the work tedious (unscripted scenes going on far longer than Hollywood would have allowed), many realized in Cassavetes the possibility for more genuine and moving moments. After FACES, Cassavetes embarked on HUSBANDS, in which he starred with Peter Falk and Ben Gazzara. The film centered around three friends dealing with life and mortality after the death of a mutual friend.

Though neither FACES nor HUSBANDS were very popular with the mainstream moviegoing audience, both were pivotal in the integration of cinema verité traditions in future Hollywood films. This crossover of the experimental and popular was clear in Cassavetes most successful film. Though A WOMAN UNDER THE INFLUENCE (1974) was produced with a complete script, it retained much of the intuitive and spontaneous acting of Cassavetes’ earlier films. Staring Gena Rowlands and Peter Falk, the film investigated the mental illness of a woman and the disintegration of her marriage. Financed independently by the cast and crew, A WOMAN UNDER THE INFLUENCE was a popular and critical success.

Throughout the late 1970s and into the 1980s, Cassavetes continued to work as both an actor and director. He directed THE KILLING OF A CHINESE BOOKIE (1976), OPENING NIGHT (1977), and the 1980 film GLORIA which again starred Gena Rowlands, and which many believe was one of her finest performances. By the time of his death in 1989, Cassavetes had directed twelve films, creating a body of work that addressed serious topics and paved the way for a more vibrant American cinema.