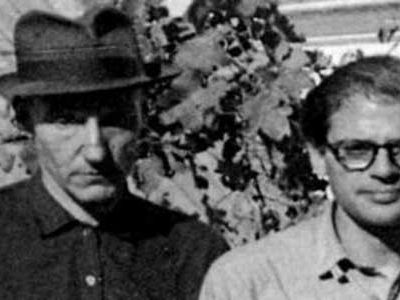 The Source
Novelists, Poets, Writers
(1899 - 1899)
KNOWN FOR
Jack Kerouac's On the Road; Allen Ginsberg's poem "Howl"; William Burrough's novels, including Naked Lunch.
AMERICAN MASTERS FILM
The Source: The Story of the Beats and the Beat Generation
(May 2000)
Directed by Chuck Workman 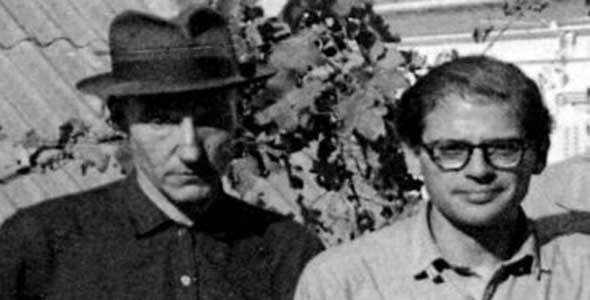 “I walked on the banks of the tincan banana dock and sat down
under the huge shade of a Southern Pacific locomotive to
look at the sunset over the boxhouse hills and cry.
Jack Kerouac sat beside me on a busted rusty iron pole,
companion, we thought the same thoughts of the soul, bleak
and blue, and sad-eyed, surrounded by the gnarled steel roots
of trees of machinery.”
– Allen Ginsberg

When Allen Ginsberg, Jack Kerouac and William Burroughs met in New York City in the 1940s, they had no intention of starting a social revolution. According to Ginsberg, “We were just trying to propose our own souls to ourselves.” In the midst of post-war conservatism, these young writers had become disenchanted and were experimenting with new forms of communication. By the 1950s, their various proposed ways of living, thinking, and communicating became a movement embraced by a generation. Today, these visionaries of that distinctly American counterculture are gone, but their influence continues to be felt in the artistic, political, social, and cultural life of the nation.

Though all three had significantly different writing styles, they were each concerned with the true voice of everyday life. Allen Ginsberg found the voice in the moans and cries of the hurt and the passionate, creating an ecstatic voice that broke with the civil and sober qualities of previous generations of American poets. William Burroughs found it in the “hard-boiled” language of the streets at night, writing books like JUNKY and QUEER, whose realism seemed to take the interests of writers like Dashiell Hammett to their most grotesque and violent ends. And, for Jack Kerouac, the voice of the people was in the free-form sounds of jazz–their indefinable rhythmic qualities that could express emotion beyond the limitations of meaning.

Though these three were not the only Beats, their efforts and visibility have made them the central figures in a wide-ranging movement. Others who played serious roles were writers John Clellon Holmes, Bob Kaufman, Neal Cassidy, Lawrence Ferlinghetti, Gregory Corso, Phillip Whalen, Diane DiPrima, and Gary Snyder. In the beginning, the movement seemed centered around a freewheeling life that paid little attention to a post-war America which many of the young found restrictive and uninspiring. Much of that feeling was first elucidated in Jack Kerouac’s book ON THE ROAD (1957). Using a new process of writing, Kerouac created the book in three weeks of spontaneous unedited typing. The form was an improvisational response to the events of Kerouac’s life the seven years prior. For many, this book was a revelation, breaking through the limitations of conventional writing, in ways similar to that of jazz on traditional popular music. Kerouac’s writing resonated with a generation whose disdain for authority and embrace of mind-altering substances had removed them from more traditional literary endeavors.

Using a different, but equally energetic style, Allen Ginsberg had written the long poem HOWL only a year earlier. For the many writers, artists, and bohemians making San Francisco their home, HOWL dealt with an anger that had gone unexpressed. The searching that Burroughs had done in his book JUNKIE (1953), and Kerouac was doing with ON THE ROAD, Ginsberg did in a completely different way in HOWL. For Ginsberg, an embrace of the unrestrained within language meant withdrawing from a need to always make sense (in the way Kerouac had withdrawn from the need for narrative). This made for emotionally unrestrained writing which the youth culture embraced as its new-found voice. In New York’s Greenwich Village and San Francisco’s North Beach, many recognized in the Beats their own desires to live and to write more freely.

Throughout the 1960s, younger generations of writers and artists were following the lead of the Beats – breaking from the traditional use of language and writing about subjects from sex to drugs to revolutionary politics. It seemed to follow naturally that a movement based on freedom would become a revolutionary movement in a repressive society, and for many within the political movements of the 1960s and 1970s the initial spark of rebellion had come from the work of the Beats. Equally important, however, is the role these three writers have played within the literary advances of the second half of the 20th century. As all three had distinctly broken from the traditions of earlier American writing, while still remaining grounded in the culture and sense of the nation, writers since are challenged with the responsibility to search not only for their own individual voices, but for their own forms as well.

To order a copy of The Source, please visit the American Masters Shop.