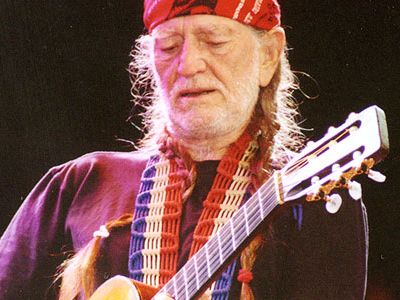 Willie Nelson
Singer-Songwriter
Born: Apr 30, 1933
KNOWN FOR
“On the Road Again,” “Angel Flying to Close to the Ground;” roles in Barbarosa and Red-Headed Stranger; co-founding Farm Aid.
QUOTE
"A lot of country music is sad. I think most art comes out of poverty and hard times. It applies to music. Three chords and the truth - that's what a country song is."
AMERICAN MASTERS FILM
Willie Nelson: Still is Still Moving
(Oct 2002)
Directed by Steven Cantor 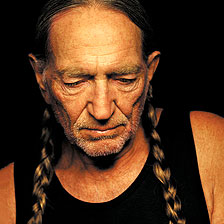 Q: What first got you interested in doing a film on Willie Nelson?

Steven Cantor: Willie is an American icon whose fascinating life story and day-to-day experiences had never been revealed in an intimate and personal way, so in my mind it was a film that was screaming to be made before it was too late.

The film’s producer, Turk Pipkin, is a longtime friend of Willie’s, and he is the one who put me together with Willie and got things started. From there, it was a natural step to take the film to [AM Series Creator] Susan Lacy, as American Masters has really become the gold standard for biographical documentaries.

Q: When did you first become aware of Willie Nelson?

SC:: Three days after I learned to tie my shoes.

SC:: Willie is full of surprises and many of them are in the film. He has a wicked sense of humor, plays a mean game of chess, gets his black belt in Tae Kwon Do while we were filming. He is a dynamic guy who is constantly pushing himself in different and unexpected directions.

One of the more incongruous sights I have ever seen is Willie playing golf. It is very hard to marry the image one has of Willie Nelson – this blue collar, hard-living voice of the people with the game of golf, but he’s actually pretty damn good.

SC:: There are more anecdotes from this film than any I have worked on. As you can imagine, traveling around with Willie is a life-changing experience. Probably my most thankful moment occurred in Hinckley, Minnesota, at a casino where Willie was playing with Waylon Jennings opening for him. Knowing that Waylon was an important part of Willie’s early career, we tried to schedule an interview with him that day, but his representatives informed us that he would prefer to do it the following day. We were in a quandary, as Willie had invited me and my cinematographer, Paul Dokuchitz, to travel with him on his bus to Fargo, North Dakota after the show.

Initially we decided to go with Willie, afterall he is the primary subject of our film, and get Waylon another time. But, after some consideration, we decided to stay over in Hinckley and interview Waylon the next morning. That turned out to be fortuitous, as Waylon gave a wonderful and funny interview. It would also turn out to be the last one he ever gave. He had his foot amputated the following week because of complications with diabetes and he passed away soon thereafter.

SC:: Catch as catch can.

We wanted to find a current-day narrative story and interweave it with the story of Willie’s early childhood and the main points of his career. My (brilliant) editor, Pax Wassermann, and I are not big fans of narration, so part of our struggle was getting Willie and the people who surround him to provide all the essential information.

SC:: It took a while for Willie and I to get comfortable with one another, as we are both on the reserved side, both I think better listeners than talkers. For budgetary reasons, we had a limited number of shoot days and we managed to use up quite a few of them before we really began to get anything even remotely insightful. We had the concerts every night, but not much else. Willie had some health concerns and there were distractions and time always seemed short for any incisive conversations.

After about two weeks of that, some sort of unexplainable breakthrough occurred between me and Willie, and he kind of blossomed right before my eyes into a state of complete candor and openness. That was the day he played acoustic songs for us on the street of Luck, the old western-town movie set on his home property. He sat there for hours and played and sang and talked about his music, and right then we switched from having a real struggle piecing together a film to having a home run. The scenes we chose from that particular interview are, in my opinion, some of the best in the film, and that has become my favorite interview I have ever done.

From there, Willie jumped on a horse and started riding around while three of us with cameras tried frantically to follow him. And then he took us to his Tae Kwon Do class where he was doing a final preparation for his black-belt test. I knew we had a winning film after that day.

Of course, another obstacle is that throughout the shoot I was losing brain cells by the hour and had trouble keeping track of which topics we had covered and what stuff we had shot. But that’s a discussion for another time.