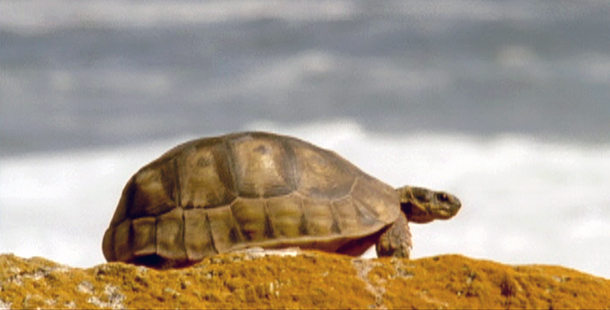 But as NATURE’s The Reptiles: Turtles and Tortoises shows in vivid detail, the helmeted terrapin can be also be a surprisingly quick and agile predator. Working in packs, like wolves, groups of terrapins can corner and devour birds that pause too long by the water’s edge. One early biologist watched, stunned, as a pack of seemingly sleepy terrapins suddenly attacked a wading bird, “dragging it underwater to devour it.”

Such coordinated cunning may seem surprising for a turtle. But the world’s nearly 300 species have a remarkable range of behaviors, from wood turtles that stomp on the ground to attract worms, to sea turtles that can travel thousands of miles to lay eggs on the very beaches where they were born. Then there are the cleverly deceptive snapping turtles, which can have body parts shaped like wriggling worms or finning fish — all designed to lure prey to their doom.

This diversity isn’t surprising. After all, these shelled reptiles have had some 200 million years to evolve into today’s dazzling array of shapes and sizes. They live on all the world’s continents and in all the world’s oceans — except the frigid polar regions.

In general, there are three groups of turtles: Tortoises, which live on land but sometimes take a dip in water; terrapins, which live mainly in water but lay their eggs on land; and sea turtles, which spend much of their lives paddling about the ocean, but lay their eggs on beaches. There are 8 species of sea turtles, about 180 kinds of terrapins, and nearly 100 varieties of tortoises. The biggest turtle, the leatherback sea turtle, can grow to 8 feet long and weigh 2,000 pounds. The smallest, the southern speckled padloper of Southern Africa, can be just 4 inches long and weigh only a few ounces.

Turtles have held great significance in many cultures. Whatever their size, however, turtles have long figured large in the human imagination. Some tribes say the world was born on the back of a turtle. Some Hindus picture the universe being held up by four elephants — all perched on a turtle’s shell. Other cultures hail the turtle as a symbol of resilience and practicality, since it carries its home on its back. Folk tales celebrate its determination — such as when the speedy but overconfident hare is beaten in a race by a plodding but persevering turtle.

Unfortunately, turtles have also figured heavily in the human diet. Turtle soup and turtle meat are mainstays in some cultures, leading to the overhunting of some species. But just as big a threat comes from the destruction of turtle habitat, from the freshwater swamps that harbor many species, to the oceanside beaches where sea turtles must lay their eggs. Overall, nearly 3 dozen species are considered rare or endangered, including nearly all of the sea turtles.

Luckily, turtles have an increasing number of allies. Around the world, people are realizing that shells aren’t always enough to protect these remarkable reptiles, and are taking steps to save populations. Like Africa’s helmeted terrapins, these turtle protectors are learning that there is strength in numbers.