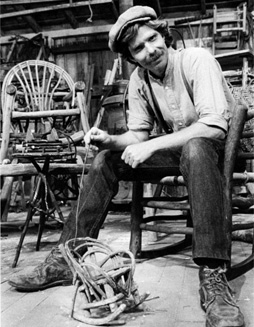 If it isn't baroquedon't fix it. -- William Weldon I like chairmaking. Chairs are intimate objects. You might say, "I love that desk!" or "I love that table!" but you only mean it when you say, "I love that chair!" As one old chairmaker put it, a good chair is "like somebody hugging you."

The three chairs in this chapter represent three quite different styles. My instructions for each are correspondingly different to match the varying degrees of control required. They are all good forms for the firsttime chairmaker. The materials and techniques range from nailed willow twigs to compound beveled ancient white oak. The work can be challenging as well as surprising. The freedom afforded by the rustic form can be far more demanding of the craftsman than the rigorous precision required to join the wainscot chair.

Every few decades the wheel of fashion turns again to a peculiar style of furniture known as "rustic." This style, contrived to combine the comforts of civilization with the look of wildness, can he remarkably varied and sophisticated. Far from being the simple constructs of close-tonature country folk, the rustic chairs of the eighteenth century were actually carved from solid wood to look like gnarled sticks and bark.

Originally, only the very rich suffered from nature deprivation, but as over-civilization afflicted more and more people, rustic furniture became increasingly popular. Someone eventually thought of using real sticks with the bark on them instead of carving and painting blocks of beech. This opened up rustic furniture making to anyone equipped with a hatchet and some nails. People even began making rustic work as a pastime. A woman's magazine of 1857 recommended using idle time in the winter, "when there is but little to do in the garden," to cut wood for "making rustic chairs and tables." My own grandfather made bent willow chairs in Celtic convolutions as a sideline during the Great Depression.

Although rural and amateur furniture making continued unabated, commercially manufactured designs soon appeared. In about 1900 die Old Hickory Chair Company in Indiana began more than a half century of manufacturing simple, comfortable, inexpensive, straight-ahead hickory chairs. These chairs quickly became the dominant species in the summer camps of America. Their uniformity is remarkable; the hickory saplings were grown like corn just for chairmaking, harvested, and set into identical bending frames. The tenons to form the joints and the rounded ends were shaped by lathes and tools that resembled giant electric pencil sharpeners.

Above all, though, rustic furniture is fun. Your designs can be as free as the material you make it with. Strict instructions for this kind of work defeat the purpose. I can, however, offer some suggestions on materials, methods, and tools; the rest I leave to you and the trees.