Chair seats of woven rush have seen the south end of humanity since the days of the pharaohs. Countless different plants have been used—from corn husks to pine trees (in the form of paper-based imitation rush). The marsh-dwelling common cattail, however, makes about the best bottom a chair could have. Cattails are wild plants, growing free by the roadside, but are often adopted by someone living nearby Ask around before you harvest too near a dwelling.

Gather your cattails when the leaf tips just start to turn brown. In our part of the country this puts you in the high weeds in August, just at the time when Mr. Copperhead is feeling hot and mean. If you make a cottonmouth angry, I hear, it will follow you all day until it bites you. My cousin Walter won't go near the marsh without a stick to beat the bushes, and he always hollers, "Ho snake! Ho snake!" as he goes.

It's cattail leaves, rather than flower stalks, that you want. Slice them off diagonally at the base with a sharp knife. Bundle them up and tie them loosely with one of the leaves. Set them away in a dark, cool place to dry. Give them plenty of air to prevent mildew and rot.

When the rushes are dry, the tip ends will start to frizzle and the bundle will have shrunk. The now loose binding will have fallen to the floor. Dried leaves need to be dampened with water to make them soft enough to weave without breaking. Sprinkling the bundle with rainwater and wrapping it with a damp towel may be enough. If you see that the rush is cracking, however, you may need to soak it. Overnight in a cold rain barrel or an afternoon in a warm tub will do. Try not to prepare more leaves than you can weave at one sitting; they may start to go bad if you resoak them more than once or twice. Stand them to drain awhile before you begin work.

One, two, or three strands of leaves will make up the weaving cord. Fewer leaves makes for smaller diameter cord. The smaller the cord, the finer the work and the longer it takes; the more, the fatter and coarser and faster. I would rather weave with three but sit on one.

Rush seat weaving proceeds as a spider spins her web. The weave moves from corner to corner in a converging rectangular spiral. To start, take the leaves and place them, butt end first, down inside the left-hand corner of the seat frame. Let the coarse heavy ends hang down below. There are four moves to make at each corner.

1. Towards you over the top.

2. Away from you underneath.

3. Up through the middle and over to the left.

4. Back under and shoot to the right.

After which, you rotate the chair clockwise one-quarter turn and recommence at the next corner. As you spin the chair around, wrapping the four comers of the frame, four squares of rush will grow like rope crystals to fill the space.

Roll the leaves smoothly together between the length of your fingers as you go, maintaining the same direction of twist as you weave. Always make the twist toward the center of the rail that the cord Is passing over. This sounds simple, but calls for mental gymnastics as the cord passes in alternate directions. If you twist toward yourself when you lay from left to right, you will need to twist away from you when going right to left.

Cattail leaves run about 5 feet long at best. This means that you must continually add new leaves to keep the cord going. Make your additions when the cord reaches the mid-point between two corners. To add a new leaf, stick about 6 inches of its heavy end down between the stoutest strands of the cord. Give the cord a twist or two to lock the newcomer In place and then lay it down to join in the twist with the others. You can also tie in new leaves as you go. 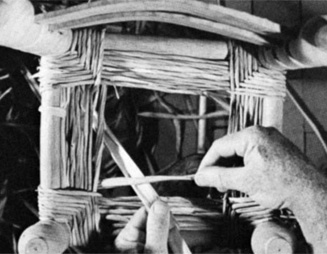 Turn in a new leaf before the old one runs out. As the corners of the frame fill up, pound the cords with a beating stick to ensure that the weave is tight. The fat ends of the added leaves that have been growing like a beard beneath the seat can be shaved off to provide the stuffing to fill and cushion the seat. Slice them off with your knife and force them evenly into the triangular pockets with the end of the beating stick. Fine wood shavings from the plane will do as well for stuffing if your leaf butts are too coarse.

When you are working with a trapezoidal chair seat with the front rail longer than the back rail, you will need to add courses to the front corners until they are even with the back. Start as you would for a regular chair, making six complete passes around the chair, stopping just before you pass over the right side of the back rail on the last go-round. Now take some leaves to make an extra cord and tie them to the midpoint of the inner cord on the left. Weave this new cord around the front corners, and then thin and merge it with the old run which you stopped earlier. Wrap this merged cord around the chair until you reach the stopping point again. Repeat adding on the left and merging on the right until the corners line up. 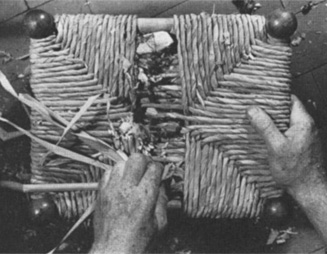 Stuff the pockets with trimmings or shavings. On a rectangular seat, the two short sides will fill up before the long sides. Once this happens, the weave gets even simpler. Start at one side of the open space and go over and under, back and forth, as you would when writing a figure 8. Keep stuffing and beating and twisting the seating until everything is tight.

Let the newly woven seat dry in a cool, dry space away from direct sunlight.