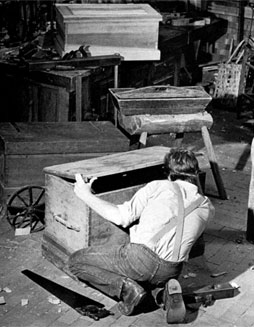 . . . and it was after long searching that I found the carpenter's chest, which was indeed a very useful loading of gold. --Daniel Dcfoc My newfound prize sat behind me as I rolled down the dark, rainy road back to the shop. It had been won from the city rather than from a shipwreck, but my excitement nearly equaled that of the marooned mariner when he rafted his tool chest-treasure back to the island. The distraction of the mysteries within arm's reach caused me to run off the road once as I rummaged blindly, pulling out a brace, a gauge, a plane.

The letter that had led me to the tool chest had borne a four-monthold postmark when I saw it. Some folks had just moved into an old house, in back of which was a garden shed full of junk. Among this junk was an old tool chest which they didn't want and decided to sell. They were in a city right far off, but they had heard that I was interested in this sort of thing and asked me to come look at it. I figured it was worth the gamble.

I found them in their back yard, sitting in lawn chairs around a large dirty box. From the fuzzy-felt texture of the worn places I could see right away that the box was made from tulip poplar. That meant it was American, rather than English, perhaps even southern. It looked good.

The lid of the chest was off its hinges and lying propped against the back. It had been scrawled over with blue carpenter's chalk in a child's hand. The mortice lock was missing and had been replaced by a stamped metal hasp and a rusty cheap combination lock. The folks had set out a few of the tools, but most just lay piled in the filth of the chest. Half of the contents of the chest was trash: lengths of iron water pipe, cracked electrical fixtures, and auto parts with peeling chrome. The tools within told a sad tale. 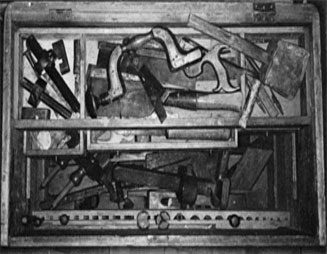 Inside the chest. The rack of moulding planes is concealed beneath the sliding tray. In the top tray was a 2-inch-wide paring chisel, its pear-shaped boxwood handle mushroomed and split into three pieces, its edge chipped and blunted. They were good tools, bearing hardly any sign of use—but much of abuse. Some were in mint condition, except those that had been smashed by a hammer. Someone—afternoon vandals, rock-chopping children—had broken into the chest and and trashed it.

Price was the immediate question. How much was this lot worth to me? I don't like to buy and sell tools as some folks do, but I see a lot of catalogs and occasionally go to auctions, and so I had an idea of the going rate for each of the items in the chest. I began to pick through them, list them, and assign a "fair" price to each of them. One after the other I studied, pondered, and wrote down a price. Eventually my list looked like this: 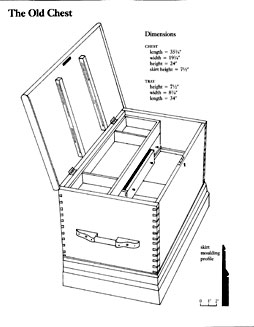 THe Old Chest Drawing. Click image to see a larger version.Five hundred and sixty-seven dollars is a lot of money, but I had priced everything at the level at which I would not hesitate to buy. I was trying to walk that thin line between coming across as a cheapskate or a fool. In spite of my upbringing, I went for the fool and rounded up to the nearest hundred.

"I've totalled them up," I said. "Looks to me like about five-fifty; but I think six hundred is closer to it."

There was the faintest flattening in my host's smile. "Well," he said, "I guess that would be all right."

Shrewd bargainer that I am, I couldn't let it rest there. "How about six-fifty?"

Back on the road through the rainstorm a wave of "buyer's remorse" shook me with a cold chill. Idiot! I suddenly thought. I'd been taken!

Whoever heard of buying a boring machine, a slick, a broadaxe, a carpenter's adze, and a chest of joiner's tools all in the same go? Someone had put all this together just to trick me!

But the more I thought about it, the more ridiculous that fear seemed. Besides, with tricks like that, who needed treats? No, it didn't look like a setup, but it certainly was a mystery. Perhaps I'd find the answer when I studied the chest more carefully.

It was too late to take the chest to the shop, so I went right home and began cleaning it out that night. The plumbing pipe and automotive trash went into a bag and the tools into neat rows on the floor. A piece of cardboard with faded purple ink was in one of the drawers. Even under ultraviolet light I could make out only the words "were made by hand." Late that night I finally made sense of it: "when windows were made by hand." At some point someone had displayed these tools in something like a family museum. 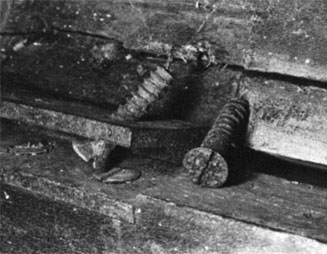 The square-ended screws usually date from before 1850. The cast-iron butt hinge is also typical of this period.

The first thing to examine on an old chest is the screws. After about 1850 wood screws were machine made with sharp points. Prior to that, the threads were either hand filed or die cut with a square point. The cast-iron hinges on die back of the chest were doubtless the original hardware, and sure enough the screws were the characteristic squareended variety with offset V-bottomed slots. The chest was probably made before 1850. But what about the tools? I would need expert help to read their story. I returned the tools to their places so that before the shop opened the next morning I could take the chest to Jay Gaynor, Curator of Mechanical Arts at Colonial Williamsburg.

Jay looked at the dovetail saw first. The teeth were broken and cracked as though it had been used to cut through nails. The maker's stamp on the stiffening back read i WRIGHT GERMAN STEEL. A quick check in one of his books showed that four I Wrights had manufactured saws in Sheffield, England, prior to 1850. During that period the mark "German Steel" was a common indication of high quality the steel having been imported from Germany. Knight's American Mechanical Dictionary of 1876 defined German steel as being "made of charcoal-iron obtained from bog-iron or the sparry carbonate."

The brace, plated with inset brass, was unmarked and had less to say. The shrinking wood had caused the brass to pop free of its screws. Jay looked at the button on the chuck to release the bits and said that it was on the English rather than the Scottish side. Beyond that he couldn't say.

Next we looked at the moulding planes. The best looking of the set were a pair of match planes used for cutting tongues and grooves in 3AAsh, Inch boards, and a i '/z-inch skew rabbet plane for cutting shoulders into wood. These were stamped: 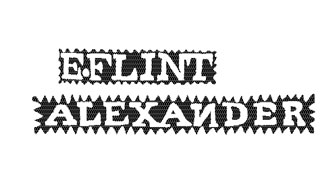 We could find nothing on Flint in any of our books. Jay suggested that I call on Emil Pollak, an authority on American wooden planes and their makers, to see if this name had surfaced recently. I reached Emil late that night. Neurosurgeons could take a lesson from the detail with which he had me describe the planes to him. He searched his files, but E, Flint was not there—yet. Flint must have been a woodworker living in Alexander, somewhere, and long labor with early census data could probably turn him up.

Two other moulding planes, a combined bead and quarter round and a 7/8-inch side-stop dado plane, were so similar to the ones marked Flint/ Alexander that I was sure that they were made by the same hand. They were, however, unmarked. The bead/round plane had a knotty flaw in It—which could account for the maker's reluctance to lay claim to it. Such unstamped tools could usually be had at a considerable discount.

The screw arm plow plane was also marked E. Flint/Alexander. The five remaining irons were stamped w. BUTCHER, surmounted by a crown flanked with the letters w and R. Jay flipped open a dictionary to find that William IV had reigned as King of England from 1830 to 1837. The WR was William Rex, son of King George III.

But although they were English irons, the planemaker himself was probably a subject of Andrew Jackson, president of the twenty-four United States of America. To Jay's educated eye, these planes had a distinctly American look. English steel and American wood. Jay said this was the combination to expect. Americans could not then compete with the English edge-tool makers, but as the remaining planes showed, Yankees were on the move. 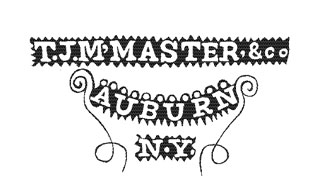 Two irons were stamped BUTCHER, but the number 18 hollow was stamped NEWBOULD CAST STEEL, with a detailed crown motif. All three planes had successive owners' initials R. N. and T. L. stamped into them. The maker, Truman J. McMaster, manufactured planes in the New York state prison at Auburn from 1825 to 1829 using convict labor. The last moulding plane, a 6/8 astragal, was stamped: 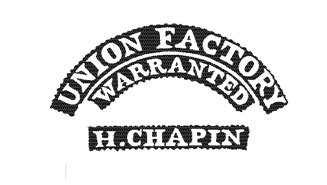