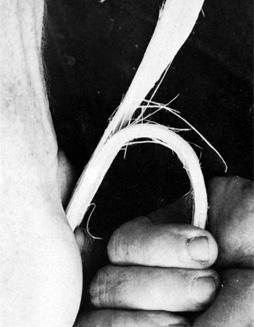 In the event of severe run-out hold the piece below the split with one hand and pull the thick side sharply back on itself. The woven seat is made by wrapping the splits around the front and back seat rungs (the warp) and then interweaving as you wrap around from side to side (the woof). I wrap the front to back part first because the front edge of the seat is what will be seen the most. Since it is the most visible, you want it to be the tightest: that is, you don't want gaps to show between the splits. It's much easier to get the warp splits to sit close together than it is to get the woof splits tight. Start in the front corner by putting the end of your first split underneath the front rung and tacking or catching its end on the side rung. Bring the free end up around the front and take it over the top of the seat and around the back. Pull tight each time you go around.

When you reach the end of this split, you will need to splice in another. All the splices should end up on the underside of the seat. It's painful, but when a split is not long enough to reach back around and make the splice underneath, you'll have to cut it shorter.

Depending on how "pure" you want your chair to be, you can choose one of two kinds of splices. If you didn't use tacks to hold the end of the first split in place, then you ought to use the hook-and-eye splice. If you did use tacks, then you shouldn't feel bad about using thread to do tie splices.

To make tie splices, cut in notches on the sides of both splits, wrap heavy thread around, and tie it up. These splices are very strong. 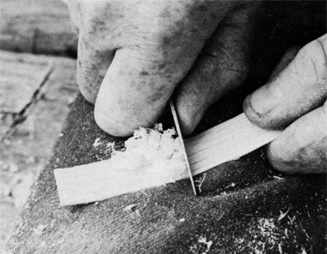 Shave the splits smooth—if you wish—by pulling them between your leg and a knife. To complete the warping, turn down under the corner at the back and come up on the side. Now you are set to begin weaving the woof. If you want to, dye your woof splits in water and walnut hulls for added effect. The plain weave is so simple that you hardly ever see it. You just go over one and under the next and then alternate on the next go-round. The herringbone weave is by far the most popular and just as easy to do. On the first course you go over two and under two all the way across. When you start the second course, you get out of step by going over only one at the start and then under two and over two the rest of the way across. The third course starts by going under two, the fourth by going under one, and the next one starts back at the beginning. Do the bottom side in doubled plain weave to save time.

Each run must be pulled as tight as possible and pushed up against the preceding split. When you get toward the front you'll find the warp splits getting very tight and you may have to use a stick to pry open the space to push the last splits through. When you get to the end of the last run, weave the loose end underneath, double it back and tuck it under, and sit down.