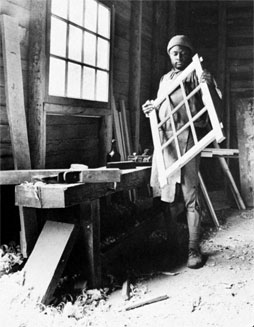 Here is a good hacckinge stoccke; on this you may hewe and knocke. --Mystery Play of Noah's Ark, fifteenth century How would you fit boards tightly together If you did not have a woodworking plane?

You might use an adze or hatchet—first scribing the joint with a compass or overlapping the boards and marking them.  with a scratch awl. Or you might rub one of the surfaces with charcoal and then press it against the other. Then you would chop only the marked areas, repeating the process by trial and error until the surfaces were perfectly fitted together.

You could also fit them by repeatedly running a saw kerf down the imperfect junction. This would subtract from each surface only in the places where the boards were closely abutted. Where there were gaps, the saw would pass along without making any impression. When the saw teeth cut both surfaces along their whole lengths the two pieces should fit perfectly. A sawhorse or two would be all that you needed.

The alternative to custom matching the serendipitous contours of the boards, each to the other, is to bring all surfaces to the one shape that will match any other like itself. You sacrifice individuality for the convenience of this abstract constant. The solution, in both senses, is the plane.

But, since the glory days of Rome, when the woodworking plane appeared, working with planes has meant working on a suitable bench—not just to provide a flat, elevated surface but to somehow hold the work so that both hands are free to use the plane. To enter the era of modern joinery, you must have both planes and a bench to use them on.