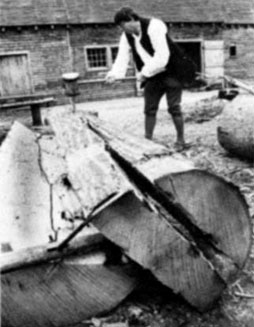 "He that will a good bench win tnusi split thick and hew thin." Enough history; now let's consider a bench for your own shop. The ancient bench top was a single massive timber. You can cut a big tree, hew it rectangular, and saw it in half, making two bench tops. The sawn, heart side of the timber goes up and the hewn surface goes down. The heart face can be harder than the bark face, and the slight crowning that will happen as it seasons can be less troublesome than the hollow warping of the other face. Flaws, such as rotten knots, may determine which face you must use. The benches in the Dominy shops are oak; many makers use beech or elm, and hard maple or birch will also do well. If you are not equipped to cut or split the timber yourself, you might have a sawmill custom-cut a piece for you. Have them cut the log into a pair of 4- or 5-inch thick tops and some 4 by 43 for the legs. Try to find a mill that is small enough that someone can get a message to the sawyer to break his routine, yet big enough that it is actually engaged in cutting wood. You may get lucky. 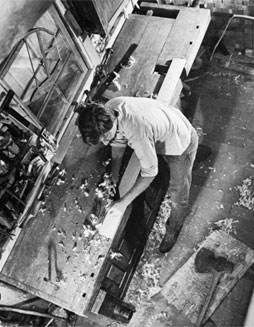 A bench top supported by a frame all around can be made thinner than those on four legs. I was out at the mill a while back and spotted a stack of 4-inch-thick red maple timbers with paraffin wax on the ends. The brothers that run this mill wouldn't any more put wax on the ends of their timbers than they would tie pink ribbons on their cant hooks. I asked one of the brothers about this. He was more embarrassed than angry. Some boys from town had asked him to cut it for bench tops. He did, and they came out and carefully waxed the ends of the timbers to keep mem from checking. The timbers had already begun to show signs of heavy warping, though, and they never came back to pick them up. This had been many months earlier, and the timbers had turned black and were on the verge of going bad. He offered them to me cheap and was glad to be rid of them. I brought them home, where the wax on the ends provided a good hour's diversion for my four-year-old daughter, who found that it worked easily with my planes and chisels. It takes about two years for a timber of this thickness to dry enough to hold still, but in the meantime you can still get a lot of use out of it. Unless the tree was born to move, the minor distortions should be easily planed out as the wood settles down.

Building Up A Top 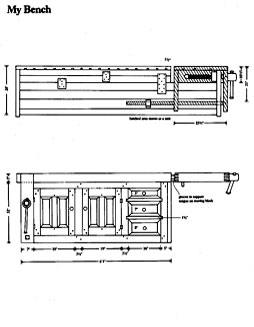 My Bench Drawing - Click on the image to see a larger version of the image.If you don't want to deal with a single heavy timber, you must build up the top from smaller pieces. Use pieces of dried 2 by 4 hardwood and glue enough of them together, broad face to broad face, to give you the width you want. You can reinforce the final assemblage with long bolts of threaded rod. This makes a very stable top, and the process of building it up gives you opportunities to bury bolts or nuts within the top to help anchor vises. The top for my paneled bench is built up of 2 by 4 pieces joined with splines and glue. Lacking enough wood to do otherwise, I joined them narrow face to narrow face and, consequently, it is only 2 inches thick. As it is well supported by the frame that it sits on, it doesn't flex. 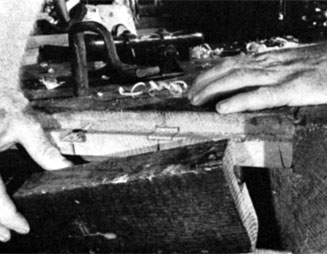