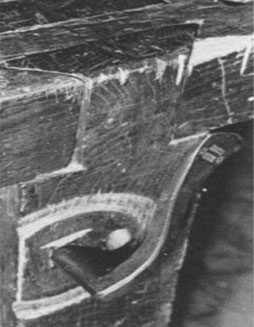 Leg joint, "a la Roubo." The simplest benches (and often the best) have legs simply morticed into the top. Not content with simple solutions, Roubo often showed a peculiar tenon and dovetail arrangement. The advantage of this joint is hard to see. The dovetail does keep die face of the legs flush with the front of the bench. And it adds a larger bearing surface and some additional stiffness to the legs. He does say that when the bench gets old and die legs loose, the tops of the mortices can be enlarged and wedges driven in to retighten them. This relies on the strength of the mortice and tenon to resist racking of die rectangular form, ratiier than on the braced design of table legs. Like Roubo, Bergeron noted that the tenons on more sophisticated benches go only three-quarters of the way through die top; this is the case for the benches in the Dominy shop. Only on commoner benches do the tenons protrude into die work surface. 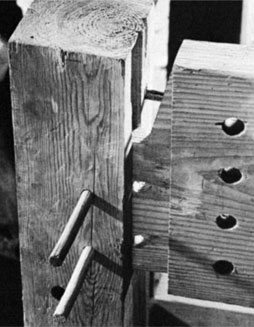 Haunched tenon joining skin rail to leg (cheap wood—expensive joint). The earliest benches stood on four independent legs with no connections between diem. When the legs are linked with rails to brace them and to support shelves and holding devices, three joints are commonly used. First is the basic mortice and tenon—usually a simple affair, with each joint offset so that they do not interfere with each other. If the bench has a thinner top needing support on its front edge, it may be provided with a skirt just under the top, as on a table. This means that both the end and the long side rails meet the comer posts at the same point. The two tenons meet inside the post and must be mitered on their ends to give each its maximum strength. Also, because the mortice is near the top end of the leg, strength can be retained by using a tenon with a diminished haunch. This will keep the end of the mortice closed but allow the tenon to prevent twisting across the full width of the board. 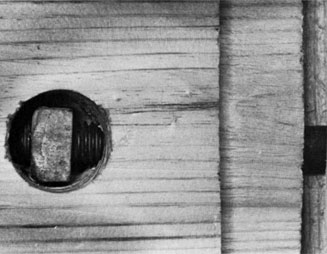 Nut sunk in the rail for bolting legs. Woodworking on the highest level solves its own problems with its own material. Joints that interlock timbers are superior to those that rely on fasteners such as nails. Yet economy has its virtues, and there are quickly cut, simple joints employing nuts and bolts to make a take-apart bench. Here, a shallow mortice and tenon is held in place by a bolt that reaches through the joint and engages a nut set Into a hole bored partially through the tenoned piece. If you make this joint, remember that since you will not have access to the nut in the wood, you must turn the bolt head to tighten the joint. (I mention this because I know a fellow who bought carriage bolts instead of common bolts. Carriage bolts have round, unslotted heads with partially squared shanks to keep them from turning in die wood. It was too late to return them, and so he went ahead and worried them tight with a pair of pliers, a chisel, and a hammer, working late into the night.)