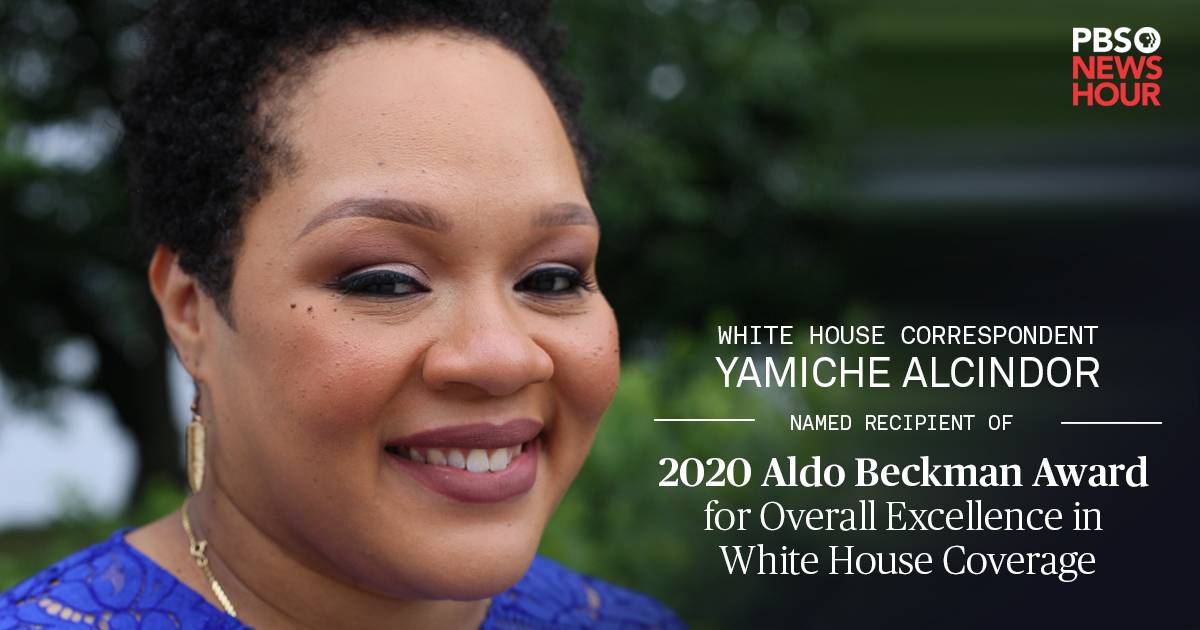 The WHCA judges said, “Yamiche Alcindor is serious, incisive and — though she has a quiet demeanor — tough as nails. Her asylum seekers report was exceptionally well done. She has interesting new takes on national stories. Her work on immigration and race are sensitively handled.”

On her character, judges agreed, “Alcindor’s qualities reflect integrity, impartial analysis, breadth and depth of knowledge of the presidency and a love of the institution. We look forward to watching her work for decades to come.”

As the White House correspondent for PBS NewsHour and a political contributor for NBC News and MSNBC, Alcindor reports on how politics impacts Americans’ everyday lives and social justice issues affecting national discourse. Her coverage of the Trump administration has examined immigration policies, international relations at the G7 Summit, systemic racism in areas like policing and healthcare as well as the Trump administration’s response to the COVID-19 pandemic.

“Yamiche appreciates the deep responsibility of asking questions of those in power on behalf of the American people that so many want to ask themselves,” said Sara Just, executive producer of the PBS NewsHour. “Yamiche’s commitment to seeking the truth and explaining it clearly and thoroughly is unwavering. Thank you to the WHCA for recognizing her hard work and talents.”

Before joining NewsHour in January 2018, Alcindor covered the 2016 presidential campaigns of then-candidate Donald Trump and Senator Bernie Sanders for The New York Times. As a national breaking news reporter at USA Today, she reported on the protests in Ferguson, Missouri and Baltimore, Maryland following fatal police encounters. While at Newsday, she covered civic activism amid neighborhood violence. Alcindor has also been named the recipient of the Gwen Ifill Next Generation Award by Simmons University, NextGen Leader Award by the Georgetown Entertainment & Media Alliance and Emerging Journalist of the Year by National Association of Black Journalists.

She earned a master’s degree in broadcast news and documentary filmmaking from New York University and a bachelor’s degree in English, government and African American studies from Georgetown University.

Previous recipients of the Aldo Beckman Award include McKay Coppins of The Atlantic, Maggie Haberman of The New York Times, and Greg Jaffe of The Washington Post.