PBS to Premiere America After Charleston on Monday, September 21 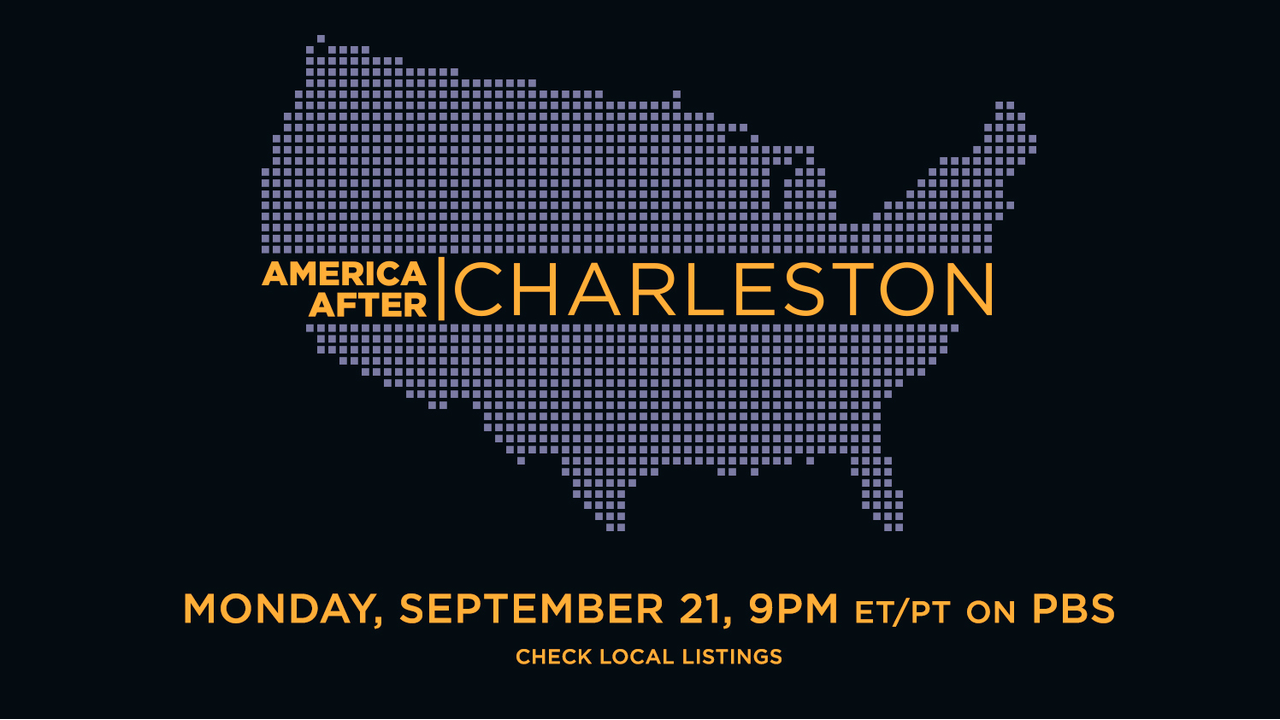 – Special production to be moderated by Gwen Ifill –

The events in Charleston have sparked national conversations about the meaning and significance of the Confederate flag, put new focus on the political call to action, “Black Lives Matter,” and has made race and the changing demographic landscape a central topic in the 2016 elections. Through conversations with the families of the victims, Charleston civic leaders and commentators from across the country, this town hall special brings together a diverse range of voices to engage in constructive conversation about the issues raised by the events in South Carolina.

AMERICA AFTER CHARLESTON will be taped just blocks from the site of the shootings, at the Circular Congregational Church before a live audience on Saturday, September 19. The special will engage audiences across digital platforms through exclusive web content, live social media integration during the broadcast and educational resources that will be made available to teachers and students.

The special airs one year after Ifill served as moderator for AMERICA AFTER FERGUSON, a national conversation, broadcast on PBS in September 2014, which explored the complex questions raised around race, class and identity in the wake of Michael Brown’s death in Ferguson, Missouri.

“I grew up as the child of an African Methodist Episcopal minister, so the murders at the Charleston church hit home for me,” said Ifill. “But this latest example of America's unsettled racial climate does not stand alone. We are returning to Charleston to continue the conversation we began in Ferguson last year, and which has resonated in Baltimore, Cincinnati and Waller County, Texas, since.”

“All around the country, the events in Charleston stunned us and prompted frank discussion about race, tradition, guns, equality and opportunity,” said PBS NEWSHOUR Executive Producer and Senior Vice President Sara Just. “This year, on the brink of a presidential election, the country seems ready for a challenging conversation about our past and our future, around all of these tough issues. That is what we will do with this town meeting.”

“We are proud that millions of Americans turn to PBS as a trusted source of news and public affairs programming,” said Marie Nelson, Vice President, News and Public Affairs, PBS. “This event in Charleston and its aftermath have once again ignited a national debate over race and identity in America. Through its town hall format, AMERICA AFTER CHARLESTON aims to give voices on a national stage to those that may not otherwise be heard. We invite the public to join us as we continue to have these important conversations on-air and across digital and social media platforms.”

“This will be an opportunity for Americans to share and to hear diverse viewpoints,” said Denise DiIanni, Senior Executive in Charge for WGBH. “Only public media could create the civic space – through broadcast and social media – for this important conversation to continue.”

“ETV’s place in the media landscape has always been to document our state’s history and culture, so adding our presence to this national project is both appropriate and meaningful,” said Linda O’Bryon, SCETV President and CEO.  “The thoughtful conversations in Charleston have been like no other in the nation.”

PBS LearningMedia, an online library with thousands of digital resources for K-12 teachers and students, will make digital assets from the show available to teachers and students. The additional material will complement a wide range of other content addressing gun violence and racism from other PBS programs such as Not in Our Town, A Path to Violence, After Newtown and U.S. Gun Homicides: Visualizing the Numbers.

AMERICA AFTER CHARLESTON is a multi-platform initiative with diverse digital and social media integration. To help foster a national dialogue, PBS and its member stations will incorporate live tweets during the broadcast. Viewers are encouraged to engage in the conversation using the hashtag #AfterCharlestonPBS.

MEDIA GUIDANCE
Credentialed media wishing to cover the event must RSVP to Kate Kelly (WETA; kkelly@weta.org) by Thursday September 17, 2015. Full audio and video of AMERICA AFTER CHARLESTON will be embargoed until after its broadcast on PBS on September 21, and select portions will be sourced out by PBS and PBS NEWSHOUR prior to its broadcast.

WETA Washington, DC, is one of the largest-producing stations of new content for public television and serves Virginia, Maryland and the District of Columbia with educational initiatives and with high-quality programming on four digital television channels. Other WETA productions and co-productions include PBS NEWSHOUR, WASHINGTON WEEK WITH GWEN IFILL, THE KENNEDY CENTER MARK TWAIN PRIZE and documentaries by filmmaker Ken Burns, including THE ROOSEVELTS: AN INTIMATE HISTORY and more recently, KEN BURNS PRESENTS CANCER: THE EMPEROR OF ALL MALADIES A FILM BY BARAK GOODMAN. Sharon Percy Rockefeller is president and CEO of WETA. More information on WETA and its programs and services is available at weta.org.

WGBH Boston is one of America’s preeminent public broadcasters and producer of PBS content for TV and the Web, including FRONTLINE, NOVA, AMERICAN EXPERIENCE, MASTERPIECE, ANTIQUES ROADSHOW, ARTHUR, CURIOUS GEORGE and other primetime, lifestyle and children’s series. WGBH is a major supplier of public radio programming and oversees Public Radio International (PRI). A leader in educational multimedia for the classroom, WGBH supplies content to PBS LearningMedia, a national service for teachers and students. WGBH also is a pioneer in technologies and services that make media accessible. More info at www.wgbh.org.