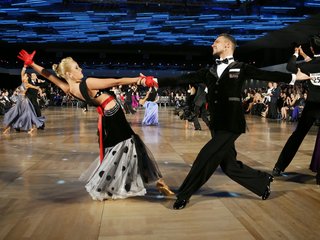 American Smooth: Radek Wiatrowski and Denise SobiewskiPhoto by Jeffrey Dunn America's Ballroom Challenge is shot at the world's largest ballroom dancing competition, the Ohio Star Ball, held each November in Columbus, Ohio. This weeklong competition attracts thousands of dancers from all over North America, competing at many levels, from preteens to seniors, amateurs to professionals. The PBS program focuses on the professional competition – the very finest ballroom dancers in all of America.

The professional competition includes four distinct styles of dancing – American Smooth, American Rhythm, International Standard and International Latin – each with its own dance steps and performance requirements. Hundreds of professional couples arrive in Ohio to compete in each of these styles. The competition begins with group dancing – a dozen couples on the floor at the same time, simultaneously performing the five required dances (or four in the case of American Smooth) in each of these styles. A panel of judges ranks the dancers and narrows the field, eliminating half of the couples in each round, until typically six couples remain for the finals. (In 2014, the initial field of competitors in the International Standard style was so large that the finals included seven couples.)

In the finals, the remaining couples again compete as a group, performing the required dance steps in their style. Then, for the first time in the competition, they get an opportunity to perform a solo – alone on the floor, with all eyes on them. Under the rules of the competition, the dancers are permitted much more creative freedom in these "showdances" than they are in the group dances.

To determine the winner in each style, the judges rank the couples from 1 to 6 (or 7 in the case of International Standard) in each of the required group dances and in the showdances. The couple with the lowest total – the score closest to 1 – is declared the winner. Because the showdance carries the same weight as each of the group dances, it's possible for a couple to lose the showdance competition and still win the championship in their style. That happened in two styles in 2014.

Finally, the winning couples in the four dance styles face off against one another in the grand finale. Each couple performs two showdances: a 1:45 short program, which has to conform to the requirements of their particular style, and a 2:30 long program, in which they have unlimited creative freedom. The couple with the best average score in the two showdances is declared "America’s Best Ballroom Couple."

The series kicks off with the American Smooth and American Rhythm divisions.  Finalists in each style compete first as a group, with all the dancers on the floor at once, as judges gauge their mastery of the required dances. Then each couple has a chance to shine: a showdance solo with all eyes on them alone.  In the end, two couples are crowned champions and advance to the grand finale.

The second hour is a study in contrasts – from flowing gowns and graceful waltzes of the classical Standard Division to the sensational footwork and provocative moves of the sizzling International Latin style. Find out which two couples are crowned champions and advance to the grand finale.

The grand finale! Four championship couples compete across dances styles to determine a single winning couple. Each duo performs two pull-out-all-the-stops solos, limited only by their own imaginations.  At the end of the grueling competition, the judges name one of these couples "America’s Best."