Poncili Creación is an art collective, composed of identical twin brothers Pablo and Efrain Del Hierro from Santurce, Puerto Rico. Known for their creative and improvisational approach to puppetry, the brothers use their works as a form of protest and a call to action. Last August, in the midst of the pandemic, El Museo del Barrio in New York commissioned a recorded performance. The duo took to the streets of San Juan, where they had been in quarantine, for a parade across the city. Last month, the duo traveled to New York for a sequel, taking their parade from La Marqueta Retoña through East Harlem. See Poncili Creación and other Latinx artists who have responded to the moment here.

Pablo: Poncili Creación is a sort of formless entity that began sparking and happening in 2012.  It champions creativity and accessibility through large-scale puppetry and improvisation, dance, performance.

Where does the name come from?

Efrain: Poncili Creación is a description of how we feel about our work and about what our work represents. It’s basically a duality, and specifically it means “chaotic tranquility.” And then we added the word “creation” because we wanted our title to have a sense of what we do, which is create relentlessly, and “chaotic tranquility” is just our sense of the rules that govern this reality.

How do you describe what you do? 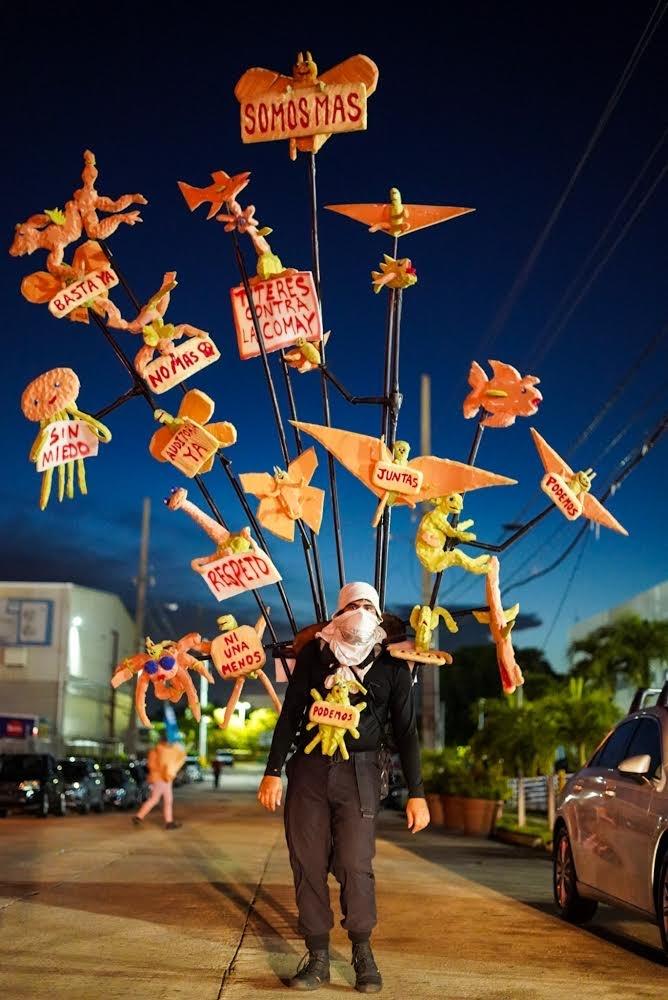 Pablo: “Beautiful nothingness,” “raw magic,” are terms that we use to describe our work, which is definitely inspired by all these objects and totems and masks that were created since the beginning of time by humans to try to change the world, invoke the gods, understand reality. And we're very interested in the puppet aspect of this, that you're creating an object to then give life to it, to give a narrative to it, to make a myth.

Efrain: I just think that puppetry is the tool that helps us make our work more accessible and under the guise of accessibility, our work can travel to almost any place. Like our shows could be performed in a super serious performance festival, and at a child's birthday party, the same show. Also with puppets, it's easier to bend reality . . . Through puppetry, we can have all these amazing ideas and actually bring them to life without so much effort, without so much budget . . . That's what puppetry is to me, it’s like a dream that is accessible to people.

Pablo: With our show, we secretly are sort of like showing people the power and the resilience of creativity, you know, in a fun and entertaining way, that also speaks to your soul, and never leaves because it's there implanted, whatever it was that you took away from it.

How did the pandemic affect your life personally and your practice?

Efrain: We travel 60 percent or more of the year . . . We are in the spirit of the traditional puppeteers, you know, across Europe and Latin America and Africa. . .  in a contemporary sense, just literally touring with our caravan around the world, doing this puppet show. And so definitely that lifestyle stopped completely.

Pablo: We had to stop our lifestyle, but we survived, and we quickly changed to do Zoom shows. And that evolved. Thanks to the El Museo del Barrio thing, we were like, well, let’s do a protest outside, let's forget about audiences, let's forget about shows or organized events. And that made the world and reality be a show, and the audience be every single person that we interact with. In the process, we started creating big sculptures that could be manipulated outside, just traverse the streets. . . It is available for whoever sees it, has a second, five, ten minutes with it, as an interaction throughout the city, unannounced, unplanned.

We've always been street performers. . .So in a way, it completely made sense. And we were like, OK, let's go back to the streets. . . And right now, that's what we have been working on. I think it would be like definitely a year that we have not done an inside show, per se.

Pablo: So again, the accessibility too. The people that would go see a show, versus everybody in the streets, that maybe 70 percent of those people who have never seen a show, who have never had the opportunity to see a puppet show. So we enjoy that accessibility.

What is the structure you used for your parade in Puerto Rico and the procession in Harlem?

Pablo: This idea of DIY is something that we have always held, spearheaded, our whole practice.

Efrain: We always have had a practice of resilience, you know, like where we come from in Puerto Rico. It's really not so common to get funding. . . so you need to find ways of funding yourself. And one way we found that is through obtaining materials through, it's not just trash. . . But there's just all these little things inside a society that just discard material of all sorts. . . So we always pick up from these materials, and there's a lot of them. But once, one time randomly, we found foam, what they use in sofas and beds, and it’s just a perfect material because it's really soft, but at the same time is really hard. And it’s also weightless. And you can carve it really easily with scissors. And this material is perfect for us to imitate life, because it kind of moves by itself, and you just have to build the proper joints and the structures. . .This material is very weightless, so it just inspired us to build bigger and bigger things, because you can carry them. So the structure changes over time?

Efrain: At the time that we built this, the Black Lives Matter protest had just started in the US. There was a lot of commotion going on in Europe and in the Middle East, in Latin America. And it was all just a number of injustices from the government happening towards the people as well in Puerto Rico . . . those injustices happening to us, all the injustice that's happening around the world needed to be spoken of.

Pablo: Like “abolish the debt” in Puerto Rico.  We had our cards protesting the horrible femicides going on on the island. We were also protesting against colonialism in general.

Efrain: We just wanted to talk about the fact that everyone can make a difference amidst this fight. So our protest is about that, about how every person needs to take into their own hands to solve the problems around them. So the idea is to create these protests that can be carried by one man, but that represents a lot of people carrying it.

So you called the parade in Puerto Rico “Somxs Podemx”?

Efrain:  So with the Xs, we don't want to gender something, and especially when we're talking about “Somos,”and it's one guy carrying the puppet. That's just a comment on the thing that we are trying to represent, the multitude. And how are you going to represent a multitude, and gender it as male or as female? So we just want to say, like this multitude, this force, that is going to change the world - it’s genderless. t

How did the performance change for East Harlem?

Efrain: The community around El Museo and especially a little bit up[town], East Harlem, is absolutely Puerto Rican. So it also has that absolute connection to where the first performance happened. The second one happened in, like, little Puerto Rico here. Within the context in Harlem and what's happening now in the world, I think we choose things that were happening more currently for this one.

And when you did the performance in East Harlem, you called it “Podemos Hacer Algo”?

Efrain: “We can do something,” something that is so much better than doing nothing.

Pablo: Because again, the difference is quite astronomical. . . . You can definitely push the world to be the place that you want it to be. And sometimes that's a scary thought. So we like to explain it with a very simple phrase, that doesn't scare anybody away from doing.

Efrain: We are definitely focusing on creative activism. And that is what we're talking about and what we're also trying to like, represent with the piece. . . . It's quite simple, the action. So just this is the push people need to start worrying about what's going on in the world, and to start changing their lives, so it can change the world around them. So we can do something. Even a completely redundant and banal statement. We can do something. Of course, we can breathe. We can wake up. We can open our eyes.

What makes a good parade/performance?

Pablo: Yeah, it doesn't have to entertain. People don't have to like it. We are doing it, it’s our own little humble poem to reality and humanity. And it is what it is.

Efrain: And for us, all reactions are accepted.

Turn up the volume on a selection of documentaries and performances that explore a variety of African American musical influences and contributions.