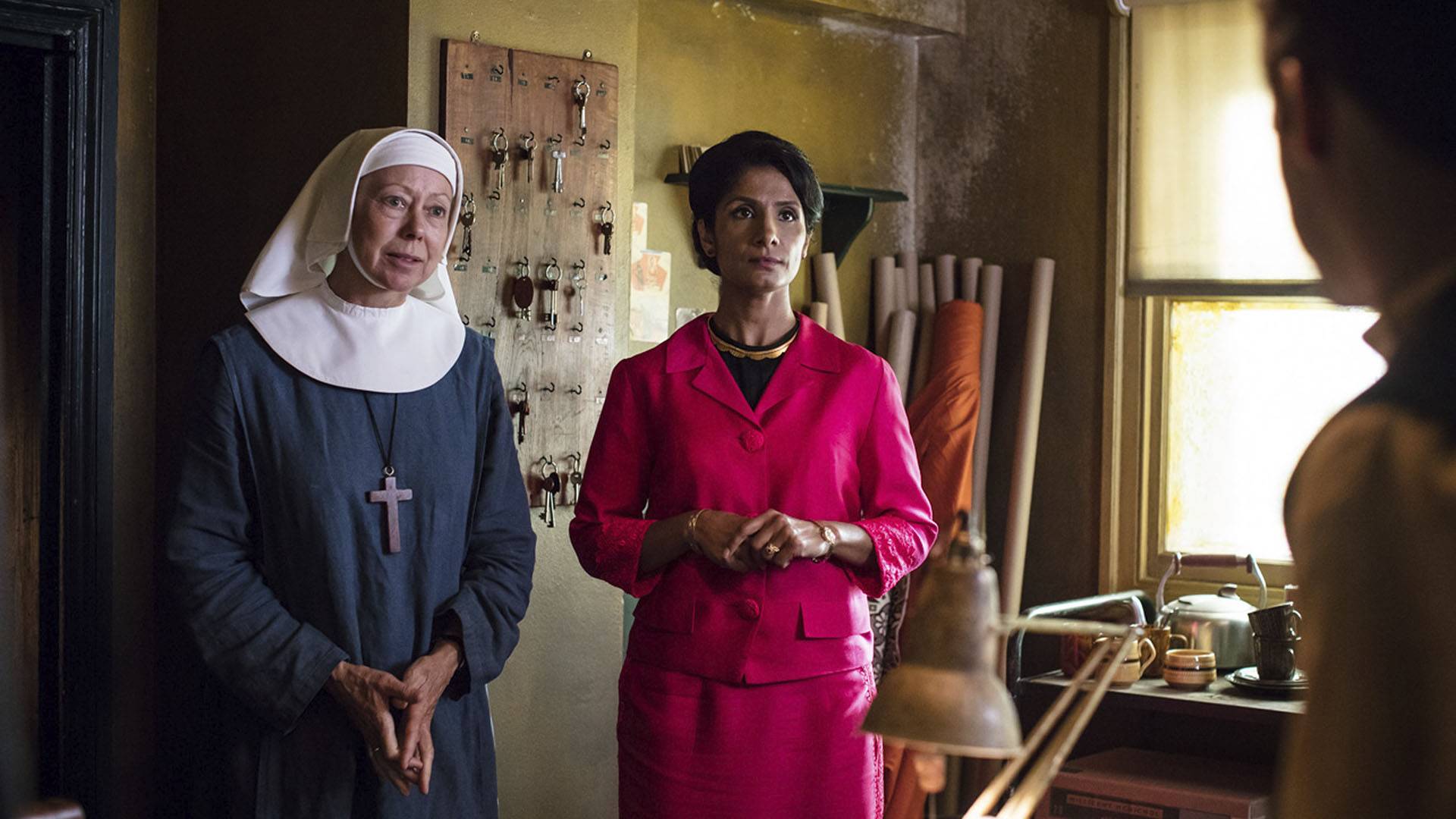 Catch up on Season 7, Episode 4 of Call the Midwife. Warning: Spoilers ahead.

As we’ve seen time and time again, the midwives of Nonnatus House are more than just medical providers. They’re the rocks of the community who offer comforting words of support and shoulders to cry on, and they frequently act as the emotional glue that holds so many Poplar families together. Despite frequently making rounds to neighborhoods that have subjected them to some of the worst of humanity, the women have somehow managed to embrace the chaos and always show compassion to the people they meet, regardless of background.

1. Things Get a Little Too Cozy

This week is no exception. The drama comes in hot this episode when the show introduces Mumtaz Gani, the co-owner and boss lady of a thriving garment business in Poplar. Happily married to a man she’s known since childhood, Mumtaz and her husband Saddiq appear to have the picture perfect relationship. Naturally, “Call the Midwife” wastes no time in shattering that dream for us — thanks a lot. The seemingly idyllic couple is almost immediately stripped of its innocence and all things good when Saddiq returns home from a trip to Pakistan with her nine-month pregnant cousin Parveen. He explains to Mumtaz that her parents, along with Saddiq’s mother, agreed that Parveen would become Saddiq’s second wife since Mumtaz, who is infertile, cannot produce children for them. A dagger to the back? Complete and utter betrayal? Yeah, that sounds about right. Let’s just say Mumtaz was not pleased.

If you thought an awkward family love triangle was enough to keep the midwives on their toes, don’t worry we’re just getting started. Leaving Valerie and Sister Julienne to deal with the tension between Mumtaz and Saddiq, Lucille meets an expectant mother with a unique case of the nomz for — wait for it — coal. No, not ice cream, not pickles. Coal. At first, Lucille is caught off guard by the unusual choice in snack, but she quickly recognizes Loretta’s craving as a symptom of pica, a disorder that can sometimes, though not exclusively, occur in pregnant women. She assures her that the cravings will subside once the baby is delivered and Loretta is relieved to hear this, wanting more than anything to crave normal food like marmalade sandwiches again. We hear ya, girl.

3. The Mystery Behind the Magnifying Glass

As we saw last season, the effects of aging began to take a toll on Sister Monica Joan, Nonnatus House’s keeper of books and queen of sass. The crippling effects of dementia began to impact her mental state, and it often leaves her disoriented and unable to complete small tasks around the house as she once could. Now, she has encountered another troubling challenge brought on by old age as her eyes begin to fail her. Fred is the first to catch wind of this predicament when he stumbles upon a high-power magnifying glass in the Nonnatus House allotment and later discovers that Sister Monica Joan has been using it to read. Worried about what could happen should the problem persist, Fred spills the beans to Sister Julienne and she agrees to seek medical attention for Sister Monica Joan.

Back on “Sister Wives,” midwife edition, Mumtaz continues to express her bewilderment over the new Gani family addition — times two, that is. After mulling over this new life that she sure as heck didn’t ask for, she confronts Saddiq about his surprise forever guest(s), explaining that while she knew she was unable to bear the child they always wanted, she felt that the love and hard work that went into their business helped fill that void in their life. Unsurprisingly, she tells Saddiq that her marriage to him is not something she wants to share with another woman, or in this case, her teenaged cousin.

After Lucille’s first appointment with Loretta, Trixie makes a house call to check in on the status of the baby after hearing that Loretta has started experiencing contractions. Like Lucille, Trixie is taken aback by Loretta’s coal-eating confession, but in an odd comparison between coal and alcohol cravings, finds she can relate. Loretta admits that she feels ashamed having to hide her secret, but that for a brief moment, she feels relief when she gives into her need. After Trixie delivers Loretta’s daughter, Mr. Campbell offers her a celebratory glass of sherry. Though she initially declines, she ultimately allows herself to have a glass.

Back at Nonnatus House, an impromptu appointment with Dr. Turner exposes the truth about Sister Monica Joan’s vision and proves that it is indeed worse than she has admitted to her peers. With a quick examination, he notes that she probably has cataracts, a common vision issue in the elderly that causes cloudiness in the eyes. He suggests that she goes through with an operation to fix her vision and prevent it from worsening, but fearful of going under the scalpel, dramatizing the procedure’s invasiveness, Sister Monica Joan is quick to dismiss her colleagues.

As tension arises in the house between one set of friends, Nurse Crane and Trixie also find themselves in an argument after Nurse Crane returns from a visit with the Campbell family. Loretta unintentionally spills the tea about Trixie drinking at her house while on the job, let alone drinking at all having been in sobriety, and Nurse Crane confronts her immediately. Though she’s quite defensive over Nurse Crane’s accusations, Trixie soon relents and admits that she has been skipping her Alcoholics Anonymous meetings. She agrees that she’s been battling some demons after her breakup with Christopher, using alcohol to cope, and promises to attend her classes again.

Unfortunately, that was short-lived. While she does make it to a meeting, she leaves almost as soon as it begins. The urge to imbibe overcomes her and she returns to Nonnatus House where she sneaks off for another drink.

Despite her cheery disposition, however, Trixie isn’t able to fool Nurse Crane. When Christopher shows up at their doorstep looking for Trixie, Nurse Crane uses this opportunity to not-so-subtly hint that Trixie is in need of a friend to lean on. Understanding the message, he later surprises Trixie upon her return from work and sits her down to discuss the problem she’s been having since the two parted ways. She’s finally able to admit that she has fallen off the wagon again, and accepts Christopher’s offer to bring her to an AA meeting. When she finishes, she tells him that while it did help her, she also realized that they can’t see each other anymore, “friends” or not. We know. It’s heartbreaking for all of us — trust.

In what seemed like an unlikely pairing this episode, Fred became Sister Monica Joan’s close confidant and cheerleader as she dealt with the reality of her vision problems. After a failed intervention with the Turners and Sister Julienne, Sister Monica Joan fled, retreating into her thoughts at the chapel. When Fred finds her, the pair has a heart-to-heart and Sister Monica Joan explains she has come to terms with the possibility of being fully blind and claims to accept this as God’s plan for her. Fred disagrees and argues that if God made the world and the people living in it — the same people fighting to help her and the doctors who can correct her eyesight — then she’s throwing away an opportunity he provided to her. Fred acknowledges her concerns about having an operation, but reminds her that everyone has their fears and that great things come from pushing through them.

After her conversation with Christopher, Trixie returns to Nonnatus House where she apologizes to Nurse Crane for lying and ignoring her help. Most notably, however, she acknowledges that she has a long road ahead of her and that to help with the process, she’ll need to dedicate all of her time to getting better. This of course means leaving Nonnatus House until she fully recovers. That wailing sound is definitely not the sound of our crying. It’s fine. We’ll miss you, Trixie!

And with that, as two of our favorite Poplar women face their fears, Mumtaz joins them. When we last left off with the Ganis, Mumtaz had brushed off her husband’s efforts to convince her that they could share the life they built together with Parveen. This was exacerbated after she helped deliver Parveen’s child and realized their baby was something Saddiq and Parveen now shared together without her. However, when Sister Julienne sees that Parveen has little motivation to feed her baby after the birth, she and Dr. Turner, her intervening partner in crime, drop by to help Mumtaz open up about the situation. They are able to convince her that while it might not be ideal, there is always a way to make the most of it and that doing so will benefit everyone — most importantly, the baby. In the end, Mumtaz gives in to their gentle nudge and reconciles with Parveen to support her through her new journey as a young mother.

Forgot how we got here? Catch up on Season 7, Episode 3. And don’t miss our modern take on “Call the Midwife”: The Modern Midwives Blog.

Learn more about our bloggers, all experienced midwives from the Detroit area.

Listen to the Sounds of Call the Midwife

Enjoy the sounds of 1950s London with four Call the Midwife Spotify playlists.