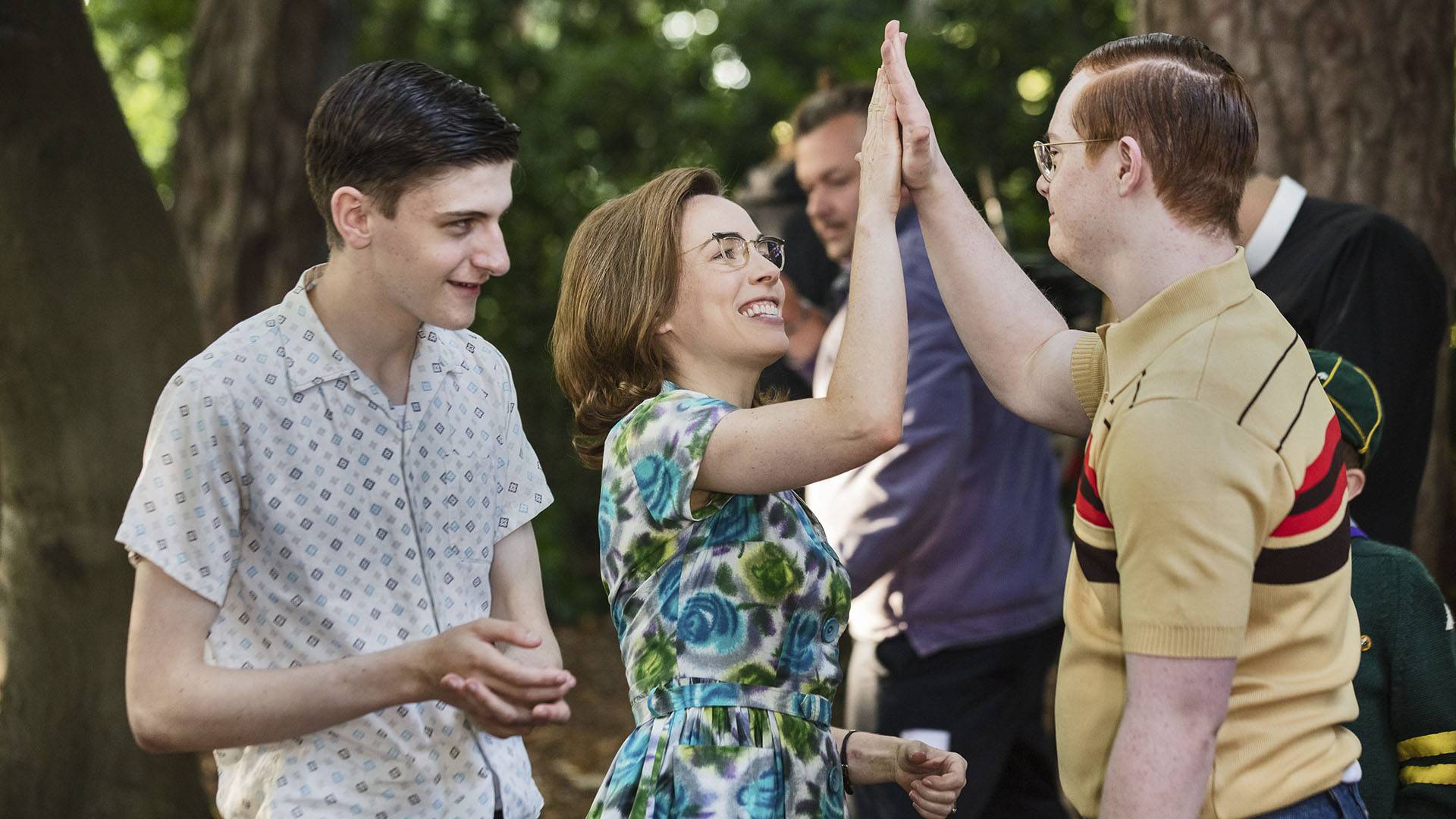 Deborah McBain says that although our culture has become more inclusive of individuals with differences, there are still barriers and ignorance.

Editor’s Note: The opinions expressed in this blog post are solely those of the author.
Spoiler Alert: This post discusses events in Call the Midwife Season 7 Episode 5.

In this episode the fear of disease, fear of giving birth, fear of each other almost becomes the undoing of the fearful. But through its strong sense of kindness and inclusiveness the Poplar community overcomes each fear. As we follow each character’s development through the Poplar neighborhood, the theme of strong community continues to reoccur. Acts of kindness and expertise from the midwives and other members of the community are what make the difference in each episode outcome. This week I focus on one fearless Poplar community member.

I am touched by the portrayal and development of the character, Reggie played by actor Daniel Laurie. Reggie, a young man with Down syndrome (DS) was introduced to the series after his mother Ivy, who had been caring for him at home, dies. Fred Buckle, Ivy’s cousin, decides he does not want Reggie to be stored away in an asylum so he and his wife Violet, take him in. Despite the era depicted, writers bring a decidedly modern sensibility to their treatment of Reggie. He has become an active, visible presence in the Poplar neighborhood as a gardener and member of Phyllis Crane’s Boy Scout troop. In this episode be becomes the hero when he is fearlessly drawn to help. Perhaps he can relate to the out-cast seaman’s vulnerable position.

In 1866 a scholarly work by Dr. Down was first to accurately describe “Down syndrome”. It wasn’t until 1959 that it was identified as a chromosomal condition. Within the community I grew up in during the 1960s, I don’t remember seeing anyone with DS. Not in school, not in scout troops and not on TV. Those with “differences” of any kind were secreted away in residential institutions or hidden in family homes. Without understanding and treatment of the associated medical conditions and health risks, people with DS often did not survive past childhood. In the past, guilt, stigma and fear ruled families of those with DS.

Mary, my neighbor and good friend of 30 years, has often told me stories of her brother, Gerard. When Gerard was born in 1954 with characteristics of Down syndrome, their mother was told at the hospital to forget she had a baby and just go home. An IHM nun who was also an early childhood development psychologist at Marygrove College in Detroit traveled to the new mother’s hospital bedside and encouraged her to take her new baby home despite the dire medical opinion and nourish the child any way she could. Because of the characteristic poor suck and low muscle tone, feeding was an issue. This nun took it upon herself to continue to support Mary and Gerard’s mother as she encountered the isolation of caring for a special needs child in that era.

Mary recounts her parent’s frustrations in finding care for their special needs son at a time when insurance companies refused to cover and medical specialists often refused to treat individuals with Down syndrome. They travelled 40 miles each way to place their son in the only school available in their area for a child with DS. Gerard resided there from Monday to Friday but discovered he could get his parents to pick him up on Wednesday if he played “sick.” (LOL) Gerard’s older brother was a fierce protector of his little brother. His younger sister became a physical therapist and my friend Mary, his big sister, became a PhD professor, teaching child development at University of Michigan. Despite his strong loving family, Gerard’s life was lived largely on the periphery of society.

Gerard was 55 when he died of complications related to DS. His is the first generation of people with this condition to live into and past middle age. We are now just starting to discover the unique aging process and special medical needs of elderly patients with DS.

Carrie is another dear friend with a story about a baby with Down syndrome. I met Carrie when she was a toddler with her parents at a Michigan barn party on the same day I met my husband. She then became ring bearer at our wedding. With pleasure we watched her grow, get married and start her family. I was pleased when she chose my nurse-midwife colleagues as her maternity care providers.

Unfortunately, not all parents are fortunate enough to have a caring midwife and savvy nurse practitioner ease them into the brave new world of parenting a special needs child. And not all people with DS are lucky enough to have writers with such a compassionate modern sensibility as Daniel Laurie’s screenwriters.

Recently she shared the story of her second child’s birth and his DS diagnosis in 2011. Carrie and her husband Jason had chosen not to have prenatal genetic testing after a normal 20-week ultrasound scan. They had no reason to expect what was coming. Joshua (Josh) was born 3 weeks early, which is not unusual for babies with DS. Although Carrie thought he looked a bit small and limp, she attributed it to his being born a bit early. Shortly after the birth as Carrie held her newborn son, their midwife Amy came and sat down at their bedside. She congratulated them again on the birth of their new son then gently explained that Josh was showing some markers for Down syndrome. Amy continued calmly, “ We cannot know for sure without blood work for chromosomal testing. I wanted to talk to you myself rather than hearing it from a stranger.” They agreed to the testing and took their new son home.

A few days later Josh had to be hospitalized for jaundice caused by elevated bilirubin. This is not an uncommon newborn complication and babies with DS are at increased risk. During that hospitalization the chromosomal test results came back. Carrie states that the nurse practitioner in the neonatal unit where Josh was being treated came to them while they were at their son’s incubator. She informed them of the confirmed diagnosis of DS and had written information to give them. She offered them time to process the diagnosis and offered to answer any questions they had when they were ready for more information. Carrie feels strongly that the positive and helpful attitude in which their son’s condition was communicated made a world of difference in how they were able to process the news. The information received greatly eased the initial fear they felt. Carrie admits to naturally feeling grief at the loss of the perfect child they had expected but also has great love for and firm resolve in caring for the son they have.

Josh became a big brother for the 2nd time when Carrie gave birth to her 4th child, a daughter born on my birthday in December 2016! Josh was drawn to the baby, wanting to hold her all the time. Carrie was touched by Josh’s tenderness and empathy for the vulnerability of his newborn sister. He continues to be a joyful, loveable and loving little boy, also enjoying the company of his big sister and younger brother. He has reached many of the developmental steps that other children reach, just slower. Nonetheless, Carrie is realistic about the challenges Josh and their entire family will face. She takes one step at a time.

Her family has found a community of support with other local families raising children with DS. Families Exploring Down Syndrome (FEDS) has a Facebook page, regular meetings, parties and fundraisers. Although our culture has become more inclusive of individuals with differences there are still barriers and ignorance. Carrie and Jason continue to learn how to be fearless advocates for their son.

Unfortunately, not all parents are fortunate enough to have a caring midwife and savvy nurse practitioner ease them into the brave new world of parenting a special needs child. And not all people with DS are lucky enough to have writers with such a compassionate modern sensibility as Daniel Laurie’s screenwriters. As people of all different abilities continue to take their rightful place centrally within our society, we all need to be educated. Modern day people need to be informed and fearless advocates as well. Click here for more information on DS.