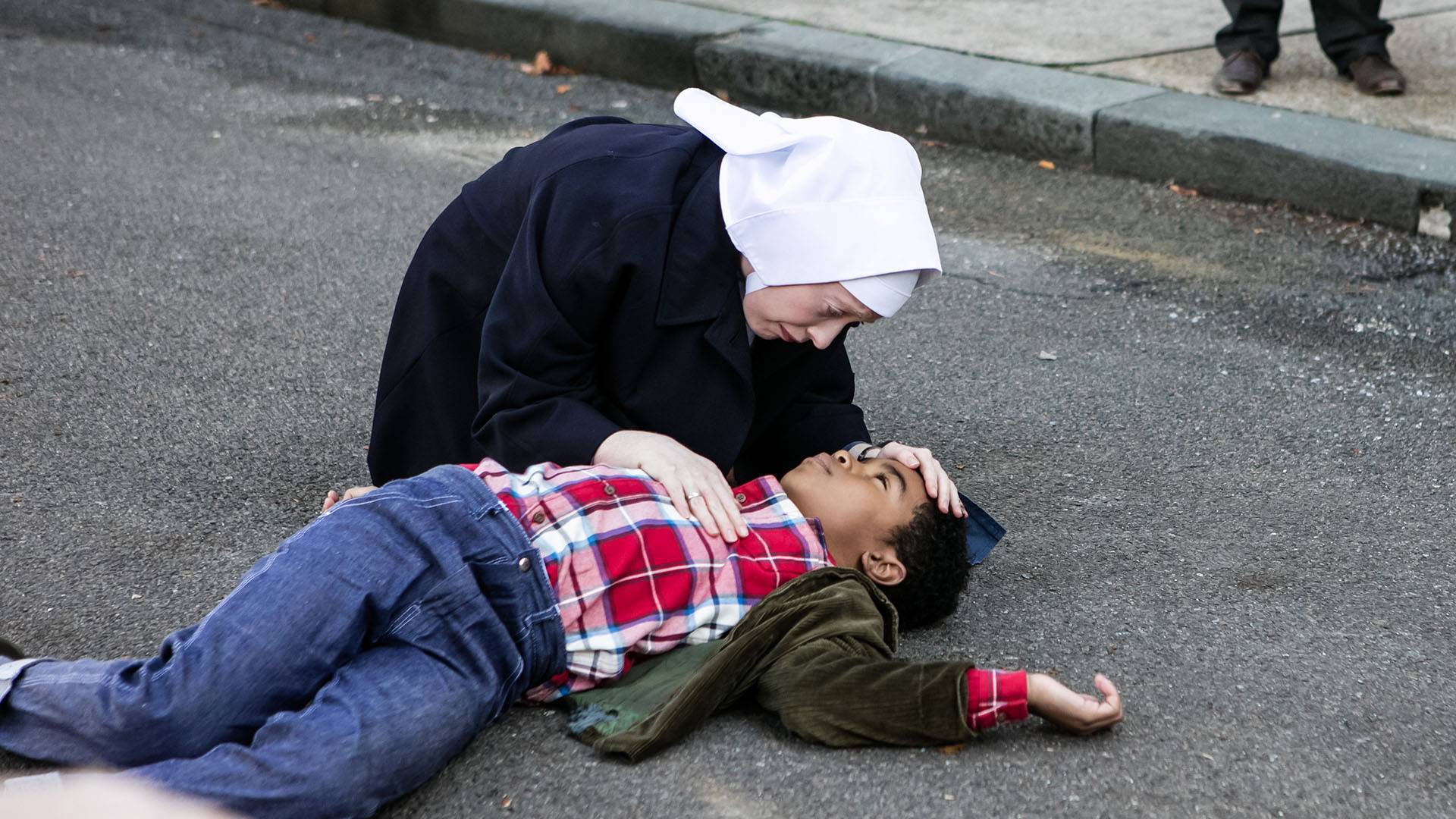 A scene from Episode 7.

Deborah McBain writes about the daughter of parents who could not write the rules of life but taught that daughter optimism, courage and resilience to deal with the challenges of a racist society.

Episode 7 Prologue: “We face each day with expectations…making good the disappointments, looking to bind what wounds we can.  Good humor matters, optimism matters. But we cannot write the rules of life and sometimes courage and resilience matter most of all.”

This episode of Call the Midwife touches on racism and the unexpected consequences of that racism. It touches on how anyone can be unexpectedly swept up and impacted by racism. Children are driven from a safe play area into the street by racist bullying and consequently suffer accidental injury by a caring soul who does not share that attitude but may be too distracted to see it until she hits it head on.

I do not intend this blog entry to be about racism. This blog entry is about the daughter of parents who could not write the rules of life but taught that daughter optimism, courage and resilience to deal with the challenges of a racist society. This daughter of immigrants from Ghana is Elikem Amable, a colleague I had the honor to work with as a labor and delivery nurse and then as a nurse-midwife. I watched her learn and grow not only professionally but also personally as she navigated young adulthood and advanced her education and midwifery career. Her parent’s birthplace was an English colony until 1957 and is known for their highly educated citizens.

Born in the United States, Elikem and her two older sisters were raised in a suburb 8 miles west of Detroit. Elikem proudly describes her hometown of Canton as a hub of diversity. Although she was often the only African-American student in her high school classes there were also Indian, Chinese, Filipino and Hispanic/Latino classmates along with the majority of white classmates. Her parents taught her that she must work harder and hold herself to a higher standard to overcome the prejudice in American society. Her parents taught her not to be diverted by racism and not take it personally. Hard work and education was the key to success.

There was never any question that she would go to college and she graduated from Michigan State University with a degree in nursing in 2006. While she was in nursing school she helped pay her way by taking a job as a “sitter” at Henry Ford Hospital. A sitter is an aide hired to sit with a patient who requires constant care or supervision. She told me she always loved birth and after getting experience working in labor and delivery as a nurse, she was accepted into the nurse midwifery graduate program at University of Michigan.

Graduating in 2013, she was hired into Henry Ford’s Midwifery Practice. The significance of being the first African-American midwife in the practice is not lost on Elikem. She continues to hold herself to a higher standard as a midwife and as a representative and role model. She has proven to be excellent as all.

Despite her good humor and optimism, she has little expectation from the American College of Nurse-Midwives, the national professional organization. Despite a strong history of immigrant and black midwifery in the United States, only 4 percent of ACNM membership identify as African-American, 1 percent Asian and 1 percent Hispanic. Modern midwifery in America has been a white woman’s movement.

As a member of the “white girl’s network,” I have been increasingly aware of my white privilege and reflect on the negative impact on mothers and children who do not share that privilege. Black women and babies experience the reported worst birth outcomes of any racial group, independent of socio-economic factors. Despite the fact that white midwives are driving the car, we are not paying attention. We were thrilled when Elikem was hired into the practice because we sensed it was important for our African-American patients to see themselves represented. The practice has recently hired another African-American midwife. Welcome, Charl’y! I understand Charl’y has recently formed an organization called Metro Detroit Midwives of Color to provide a forum of support. All are important steps but more needs to be done.

As modern midwifery moves forward it needs to prioritize the recruitment, increase the recognition and respect the importance of midwives of color. The consequences of not doing so are harmful to all and deadly to the innocent. So maybe this blog entry is about racism after all. I did not intend it to be, but Phyllis Crane didn’t intend to hit that child who ran into the street either.