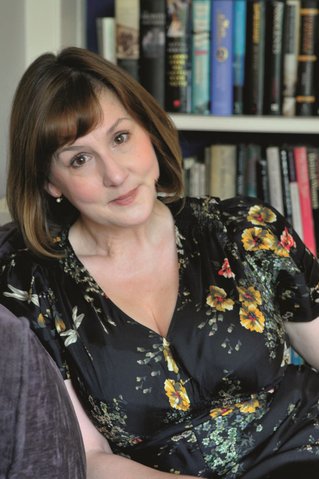 Heidi ThomasPhoto by Cath Harries Were you surprised by the popularity of the show?

I think we were all hugely surprised by the popularity of the show. Simply because for a very long time before we started to film it people told us nobody would watch it. They used to say young women will be frightened by it, older women will be disgusted by it, men won’t watch it at all, and I used to think well nobody will watch this show. The very first time it went out we got eight million overnight viewers and I think we were in a sort of shock. Our viewing figures have held steady now for six years, eleven million with consolidated figures, particularly at Christmas. But it’s not about the numbers, it’s the passion that people feel for the show, and most particularly for the stories that we’re telling.

What is the secret of Call the Midwife?

People often ask me ‘What is the secret of Call the Midwife? Why do so many people watch it? Why have they been watching it for so long in so many millions?’. And the answer is ‘Well, if I knew I would bottle it and sell it because obviously there is something there that people are really connecting with’. I think what I have come to understand about Call the Midwife – it was never a formula; it was never deliberate – is that it can be enjoyed on a number of levels. If you just want to flop down on a Sunday night and look at Trixie’s frocks, and listen to the lovely music and maybe have a glass of wine and indulge yourself in an escapist treat, you can do that. Or you can dig a little bit deeper looking at the social history, the prejudices that were involved, the difficulties people had before society became as it is today. You can even go down to the deepest level where we are telling stories about the human condition, and you can really engage with that, not just matters of society or medicine, but matters of human existence, life, death and birth. You can dig down as deeply as you want to but we don’t make you work that hard if you really just need to be cradled for an hour.

Is it important not to shy away from the difficulty of childbirth in Call the Midwife?

I’ve been amazed by our audience’s capacity for digesting really tough, miserable, gritty, vomiting-over-the-side-of-the-bed childbirth. I think people often think that the shocking thing about Call the Midwife is the violence of childbirth. However, women were subject to other kinds of violence, we’ve shown women being brutalised by men in other ways and interestingly I think sometimes people are much more prepared to have violence against women in particular, sort of wash over them. There are so many television programmes that begin with a woman’s body being found, or a child going missing and we don’t deal with women as objects of violence, we deal with women as survivors of violence. I think it is important that we don’t shy away from that.

Do you think the subject matter of birth is almost a primeval thing?

It’s interesting because I think all good drama tends to features hatches, matches and dispatches – births, marriages and deaths. I don’t think birth has ever been depicted on the page with as much detail as Jennifer Worth did it and I tried to carry that forward and depict birth on the screen with a great deal of detail. We’ve been hugely helped with input from Terri Coates our midwife advisor, but we also go behind a door that was closed.

A man in the supermarket once came up to me and said ‘Are you the midwife woman?’ And I looked around to see if anyone was in labour by the sausage counter. It was fine and he said ‘I just want to thank you,’ – he was an older gentleman in his seventies – and he said ‘I had three children who were born in 1958, 1960 and 1961,’ and he said ‘I was never there at the birth, I was put out of the room and my wife couldn’t discuss the birth with me because women were not encouraged to have that vocabulary, to discuss that sort of thing with their husbands.’ And now with daughters who are now my age or a little older he’s been able to sit down with his wife and have a conversation about what it was like when they were born.

I think by opening a door into that very fundamental experience, it creates a dialogue. For some of our older viewers it’s perhaps been a release and a relief that they can talk about an experience which was often concealed and thought of as rather dirty or something not to be discussed. Delia’s mother refers to midwifery as a ‘nasty, personal sort of job’ in series five, and I think women were encouraged not to see this beautiful experience as something that could be shared or discussed. We’ve broken down a little bit of a taboo for a new generation, it’s also opened discussions for younger women who are perhaps looking ahead to having children in due course but maybe discussing it with their mums in a way they wouldn’t.

We often have people describing how Call the Midwife is an inter-generational viewing experience in their home, and I think that’s lovely. It’s often women watching with their younger sons, for example, it’s not a purely female thing. I love writing about childbirth.

Why is the midwife such an important role in society?

It’s interesting to look at how important midwives are because I think we value them hugely in this country – interestingly in America where Call the Midwife has almost a cult following, a midwife is treated differently, she’s not as respected by the medical profession. There are many women who don’t have access to midwifery care at all. There are other women who only have access to midwifery care because the cost of a gynaecologist is beyond them. I think in Britain we are particularly devoted to our midwives, they play a very important role in social history and the building of new families.

There is still a strong community element to their practice, they come out and visit you at home which is an incredibly grounding experience and not something every culture offers. I think we deserve to be very proud of that in Britain. Ultimately the magical quality of a midwife comes from her almost supernatural knowledge of a process that we will never fully understand, that is always hemmed about with risk and loss and beauty, and every birth is a story that’s waiting to unfold and the midwife is there to write the beginning, the middle and the end of that story in her own very particular way.

How would you describe the dialogue of Call the Midwife?

After six years of Call the Midwife, it’s suddenly dawned on me that it is really hard work to keep coming back with another eight episodes – and a Christmas Special – and not to keep treading over old ground and not for it to feel like a grind. But I just can’t get bored of it because it is giving me – and us as a team – the chance to do something that may not come our way again.

Our remit at Call the Midwife is to give a voice to people who have experienced great and beautiful and terrible things, and never had a voice before. We are somehow digging up lives that were silent and we’re shining a light on lives that were experienced – if not in darkness at the time, that were very quickly sort of vanished into the mists of history afterwards. I love that idea that with every year that goes round, with every episode that I sit down with I think ‘Whose story am I going to tell today?’ There will be this little voice or this hand that goes up in the mists of history and says ‘Me, tell my story’.

What do you love the most about Call the Midwife?

What I most love about Call the Midwife and feel continually the most humbled by is when people either come up to me in the street, or write and say ‘Thank you for telling my story. That is how I remember it. That was my pain. That was my birthing room.’ Those were the things I loved. When you’re able to make a programme which is essentially fictional but sufficiently respectful of the facts for people to turn round and say ‘You have reflected my life back to me’, I think that’s very special.

More Q&As with the Cast