WITHOUT A WHISPER — KONNON: KWE uncovers the hidden history of the profound influence Indigenous women had on the beginnings of the women’s rights movement in the United States. Before the first women’s rights convention in Seneca Falls in 1848, European colonial women lacked even the most basic rights, while Haudenosaunee women had a potent political and spiritual voice and authority in all aspects of their lives.

Katsitsionnni Fox is a filmmaker whose work focuses on empowering stories of Indigenous women. Her debut film was the award winning “Ohero:kon - Under the Husk” a 26-min documentary following the journey of two Mohawk girls as they take part in their traditional passage rites to becoming Mohawk Women. Katsitsionni received the Jane Glassco Award for Emerging Filmmaker at the imagine NATIVE Film Festival in 2016. She directed and co-produced a short - doc series for REMATRIATION - a Native American women's online, multi-media magazine. It is focused on healing and empowerment of Native women through the sharing of their stories and successes. Her most recent film is "Without a Whisper - Konnón:kwe” the untold story of how Indigenous women influenced the early suffragists in their fight for freedom and equality. Without a Whisper received Best Short Film Winner at Female Voices Rock Film Festival and Red Nations Film Festival.

Vision Maker Media (VMM) is the premiere source of public media by and about Native Americans since 1976. Our mission is empowering and engaging Native people to share stories. We envision a world changed and healed by understanding Native stories and the public conversations they generate. We work with VMM funded producers to develop, produce and distribute programs for all public media. VMM supports training to increase the number of American Indians and Alaska Natives producing public broadcasting programs. A key strategy for this work is in partnerships with Tribal nations, Indian organizations and Native communities. Reaching the national public and a global market is the ultimate goal for the dissemination of Native public media that shares Native perspectives with the world.

Vision Maker Media is a nonprofit 501(c)(3) funded in part by the Corporation for Public Broadcasting (CPB).

Blog | 'Without a Whisper': A Conversation with Director Katsitsionni Fox

Filmmaker Katsitsionni Fox discusses representation of Native communities and the profound influence the women in her life have had in her film "Without a Whisper." 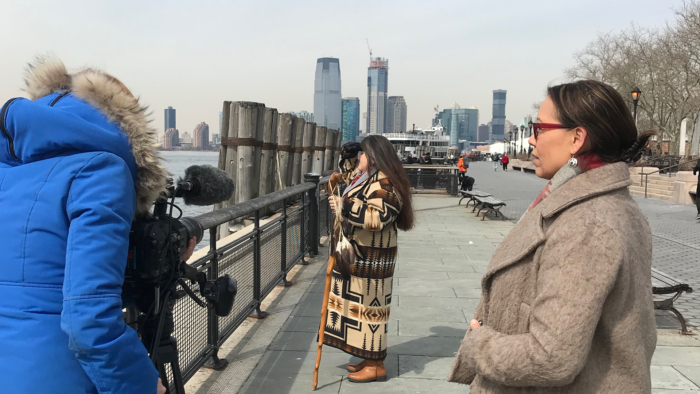