A third-generation restaurateur with over four decades of culinary experience, Chef Walter Staib is an author, Emmy Award winning TV host, James Beard-nominated chef and culinary historian. He was just awarded the 2012 Distinguished German-American of the Year.

Walter Staib has made numerous appearances on local and national cooking shows, such as the Today show and the Food Networks Best Thing I Ever Ate and Iron Chef. He is the host of the Emmy Award winning show "A Taste of History," which just received the 2012 James Beard Foundation nomination for Best TV Show On Location. The show is a vehicle for Staib to share 18th century cuisine with a growing audience. Currently, he can be seen nationwide for the fourth season on PBS and on national cable on RLTV, bringing the 18th century to life on A Taste of History, which was awarded three Emmy awards in its first two seasons. 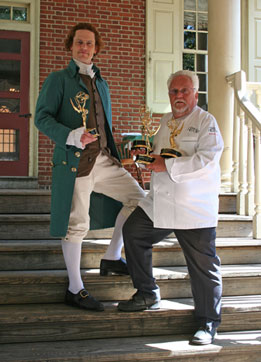 As founder and president of Concepts By Staib, Ltd. (est. 1989), a global restaurant management and hospitality consulting firm, Walter Staib has opened more than 650 restaurants worldwide. He is currently the driving force behind one of the nations finest dining establishments, Philadelphias City Tavern, a faithful recreation of an original 18th century tavern and Concepts By Staib, Ltd.s flagship operation.

His most recent cookbook, City Tavern: Recipes from the Birthplace of America (2009, Running Press) is in its fifth printing, and has sold 22,000 copies.