5 Sugars & Sweeteners Everyone Should Know 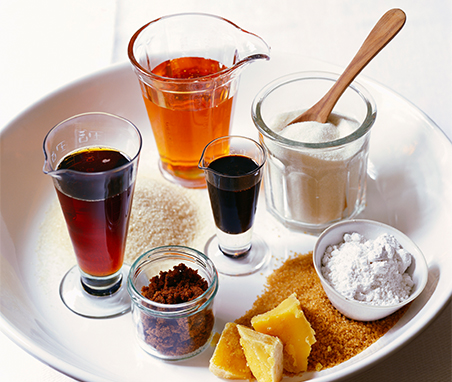 (adapted from The Ultimate Guide to Sugars & Sweeteners: Discover the Taste, Use, Nutrition, Science, and Lore of Everything from Agave Nectar to Xylitol by Alan Barclay, PhD, Philippa Sandall & Claudia Shwide-Slavin, MS, RD, CDE)

Todays supermarkets and natural food stores feature a bewildering variety of sugars and alternative sweeteners. Here are 5 sugars & sweeteners everyone should know more about, whether its to meet new sugar alternatives for baking and cooking, because its all the rage right now, or because weve heard of them but still arent sure exactly what the deal is (what exactly is xylitol?). 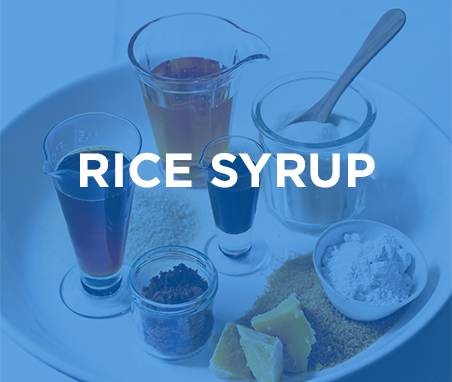 What you need to know: This mild-flavored sweetener has an enthusiastic fan base these days, especially among people avoiding fructose. Some fans and manufacturers claim it is sugar-free. It is not. As a malted grain syrup made from rice, it contains the sugars maltose, maltotriose, and glucose. Some fans and manufacturers also say that it is a complex, slow-digesting carbohydrate with a low glycemic index and is suitable for people with diabetes. It is not. It has a high glycemic index of 98, as you would expect with a maltose-based sweetener (maltose has a GI of 105). All of this means that it is not the ideal topping for breakfast oatmeal for people who need to manage their blood glucose levels.

Malting has always been about alcohol as much as sweetness, so it should come as no surprise that rice syrup or rice syrup solids are used to add alcohol to and lighten the body of beers. They are used to make many American lagers and replace barley malt in gluten-free beers. However, dont assume that rice syrup is necessarily gluten-free because it is a rice-based food product. Some producers use barley enzymes in the malting process, so check the label if you follow a gluten-free diet.

Testing it in a basic vanilla cookie recipe: This sweetener makes for a good-looking golden cookie, but the taste will be quite bland. The outside will be crisp, with a softer, slightly crumbly inner texture. 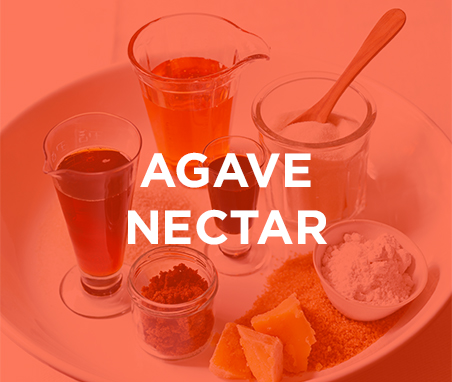 What you need to know: Agave nectar is extracted from the sap of several species of agave, most famously blue agave, Mexico’s large and spiky succulent that also gives the world tequila. The typically high fructose content of this sweetener gives it a low glycemic index range (GI 19 to 28), making it popular with people who have diabetes and must manage their blood glucose levels. It has the same number of calories per level teaspoon as granulated sugar, but it is about 30 to 40 percent sweeter, so you can use lessjust as well, because it generally costs more.

Like other syrups, there are several grades of agave nectar to choose from that vary in flavor, intensity, and color. As a rule of thumb, the neutral flavor of light agave nectar is best for sweetening beverages or replacing granulated sugar in recipes, and the more mellow flavors of amber, dark, or raw agave nectar are best for adding to tangy dressings, sauces, marinades, and glazes; drizzling over pancakes or oatmeal; or replacing light or dark brown sugar in recipes. Agave nectar has also proved very popular with mixologists, because it can be used in almost any recipe that calls for simple syrup and is a natural choice for tequila-based cocktails. The agave that bartenders use is a cocktail-ready, easy-to pour syrup that can flow through pour spouts and not clog up in cocktail shakers.

When substituting it for sugar in a recipe, remember to allow for agave nectars extra sweetness. Use two-thirds to three-quarters the amount of agave than the amount of granulated sugar called for, and, in baking, reduce the liquid by about ¼ cup to adjust for the fact that you are adding moisture. You can substitute agave nectar for honey or maple syrup one-for-one, as it has approximately the same moisture content. However, if you want to use it in your cooking, we suggest you start with recipes that already list agave nectar in the ingredients. This way, you will become familiar with how much to use to achieve optimal sweetness, flavor, and texture before using it to replace honey or other sugars in your favorite recipes.

Testing it in a basic vanilla cookie recipe: This sweetener gives cookies a lovely golden color and caramelized flavor. The texture may be dense and heavy. 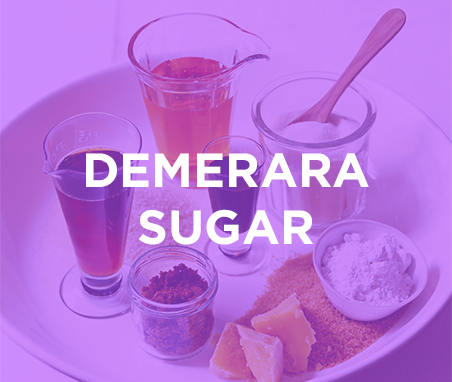 What you need to know: Originally demerara was the specific name for sugar from the cane plantations on the banks of the Demerara River in todays Guyana, where it was first planted by Dutch colonists in 1746. Today, its used as a generic term for a type of raw sugar with a dry, crunchy texture and a subtle butterscotch aroma, and it is produced by a number of cane-growing countries, but mostly Mauritius.

It is a popular tabletop sweetener in the United Kingdom, Australia, New Zealand, Canada, and, increasingly, the United States. Like turbinado sugar, its molasses-rich crystals are spun in a centrifuge to dry them, leaving coarse, light brown or tan granules. Use it to sweeten tea or coffee; sprinkle over cereals and oatmeal; add crunch to crumbles and toppings, as on crème brûlée; caramelize grilled fruit; or bring out the sweet flavor of slow-roasted tomatoes.

Testing it in a basic vanilla cookie recipe: This sugar gives cookies a delicious caramel flavor and a crisp texture. The sugar crystals give it a slight crunch. 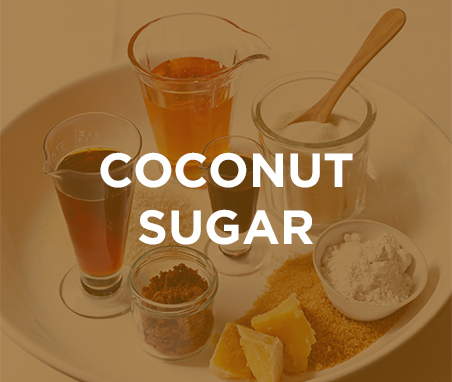 What you need to know: Although coconut sugar is sometimes promoted as a whole food, natural, and healthier than regular sugar, its still sugar and comes with the same number of calories as granulated sugar has. Thus, like all nutritive sweeteners, it may contribute to weight gain when consumed in excessive amounts, so you still have to keep your daily intake moderate. It does have a low glycemic index, but the results of the glycemic index testing carried out independently at the University of Sydney found that the glycemic index value was 54 (not the GI 35 you may find quoted frequently on the Internet).

You can use coconut sugar as a tabletop sweetener for your tea or coffee or substitute it, cup for cup, for soft brown or granulated sugar in baked goods and desserts. You can also use it when palm sugar, jaggery, or gur are called for in Asian recipes. Look for it online or on the shelves of Asian produce stores and organic, whole food, and specialty outlets. Be aware that it can vary slightly in color and flavor from batch to batch and that it is sometimes blended with cane sugar.

Testing it in a basic vanilla cookie recipe: This sugar yields a mild-tasting cookie with a very subtle toffee flavor with a crisp texture and golden color. 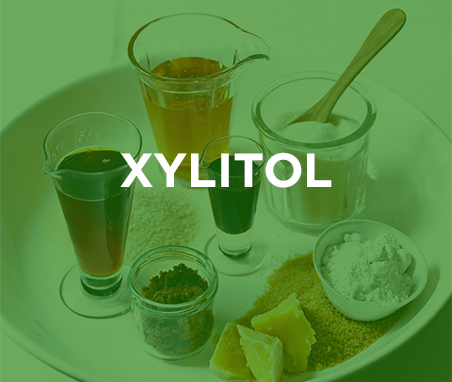 What you need to know: Xylitol occurs natural in the fibers of many fruits and vegetables but is extracted today from hardwoods and corncobs. It is as sweet as granulated sugar but has fewer calories and no effect on blood glucose levels. Like other polyols, its tooth-friendly, and chewing gum containing xylitol has also been shown to reduce the incidence of cavities by stimulating saliva flowalthough you would have to do a lot of chewing. The downside, as with many other polyols, is its laxative effect if consumed in large quantities. It is currently approved for use in foods, pharmaceuticals, and oral health products in more than thirty-five countries. You can find it in chewing gum, gum drops, hard candy, pharmaceuticals, throat lozenges, cough syrups, childrens chewable multivitamins, toothpastes, and mouthwashes. For use in the home, xylitol, which looks like granulated sugar, can be used spoon for spoon as a sucrose substitute in tea and coffee, on breakfast cereal, or in your favorite recipes. We suggest that you check recipes on the manufacturers websites before substituting it for sugar in your family favorites.

Testing it in a basic vanilla cookie recipe: This sweetener yields a blond, nondescript cookie with a slightly sweet neutral taste and a cakelike, crumbly soft texture. 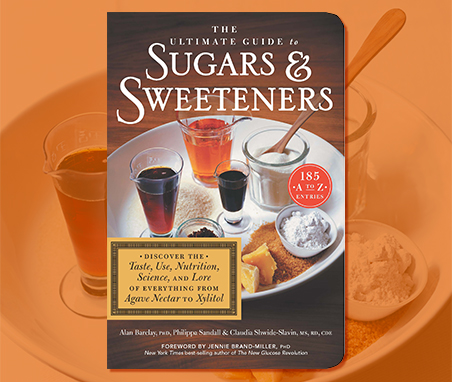 Learn even more about these fiveand 180 more!sugars and sweeteners with this all-in-one reference guide, perfect for any sweet-toothed consumer who also craves the facts. Available wherever books are sold, and as an ebook.