A Chef’s Life, Episode 10: Love Me Some Candied Yams 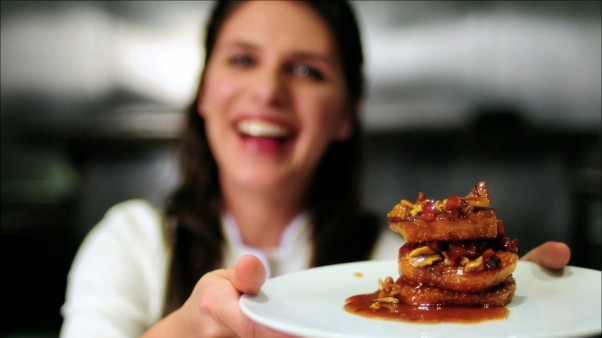 In A Chef’s Life, go inside the life of chef Vivian Howard, who, with her husband Ben Knight, left the big city to open a fine dining restaurant in small-town eastern North Carolina. Each episode follows Howard out of the kitchen and into cornfields, strawberry patches and hog farms as she hunts down the ingredients that inspire her seasonal menus. Using a chef’s modern sensibilities, she explores Southern cuisine, past and present — one ingredient at a time. A celebration of true farm to table food, the series combines the action and drama of a high-pressure business with the joys and stresses of family life.

Vivian introduces us to Rob and Amy Hill, proprietors of one of the largest sweet potato farms in the country and two of the restaurants best customers. Vivian and her mom, Scarlett, make her grandmothers candied yams and Vivian later re-imagines these for the restaurant with texture, sorghum and pecans. Mother Earth Brewery and Chef & the Farmer team up for a beer dinner featuring first-of-the-season sweet potatoes.

This candied yam appetizer will be a hit at your holiday table -- its almost like starting with dessert. This recipe appears in the "Love Me Some Candied Yams" episode of A Chef's Life, featuring chef Vivian Howard.