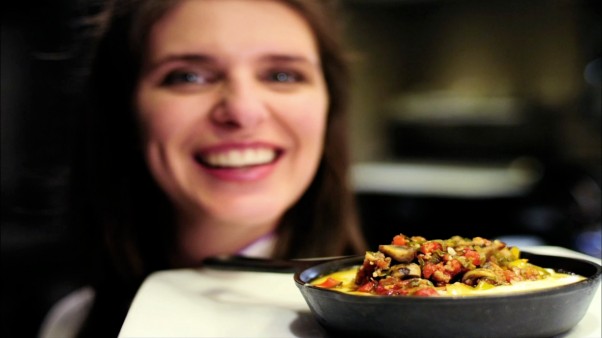 In A Chef’s Life, go inside the life of chef Vivian Howard, who, with her husband Ben Knight, left the big city to open a fine dining restaurant in small-town eastern North Carolina. Each episode follows Howard out of the kitchen and into cornfields, strawberry patches and hog farms as she hunts down the ingredients that inspire her seasonal menus. Using a chef’s modern sensibilities, she explores Southern cuisine, past and present — one ingredient at a time. A celebration of true farm to table food, the series combines the action and drama of a high-pressure business with the joys and stresses of family life.

The restaurant gears up for a practice service where the new equipment and new menu will be tested in real time  but nothing is going as planned. One of the big changes to the restaurants menus is the addition of a section called Pimp My Grits, where Vivian exalts the lowly, quintessentially Southern ingredient in four distinct ways.

"At the restaurant, we categorize the Pimp My Grits section of the menu as something to share and possibly dip into. We build each Pimped Grit in a 6 inch cast iron skillet, and that skillet is finished in a very hot oven. Each composition treats the grits as a blank canvas and strives to be balanced and unique. This is a customer favorite." -- Vivian Howard