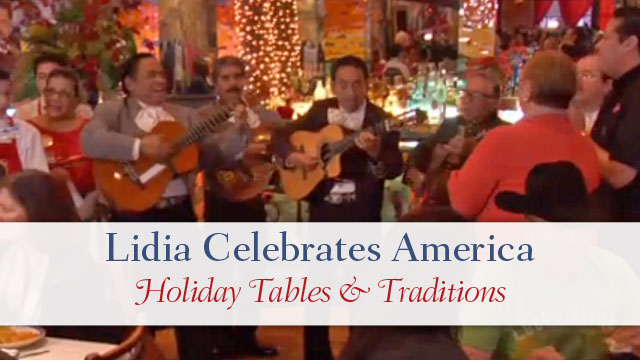 As Christmas Eve turns to Christmas Day, Lidia travels to San Antonio, Texas, to celebrate the holiday Mexican-style with the Cortez family, owners of the famed Mi Tierra restaurant. “America has a lot to offer to anyone who is willing to work hard,” says Michael Cortez, current owner of the restaurant. “My grandfather would often say he was an American by choice, not by chance.”

What started as a small counter operation has expanded to fill an entire city block, employing four generations of the Cortez family. Here, Christmas is all about making the traditional Mexican-American tamales, and some decadent desserts. Traditional pecan pralines, peanut patties, macadamia pralines — there’s even a candy the color of the Mexican flag, a long-held family tradition! Here, Lidia learns how to make Mexican bunuelos, a fried dough topped with cinnamon and sugar that the children gobble up as fast as it’s made.