Watch Lidia talk with Connie and Francesca Zappella, and hear them describe what it’s like to be female in a male-dominated profession. 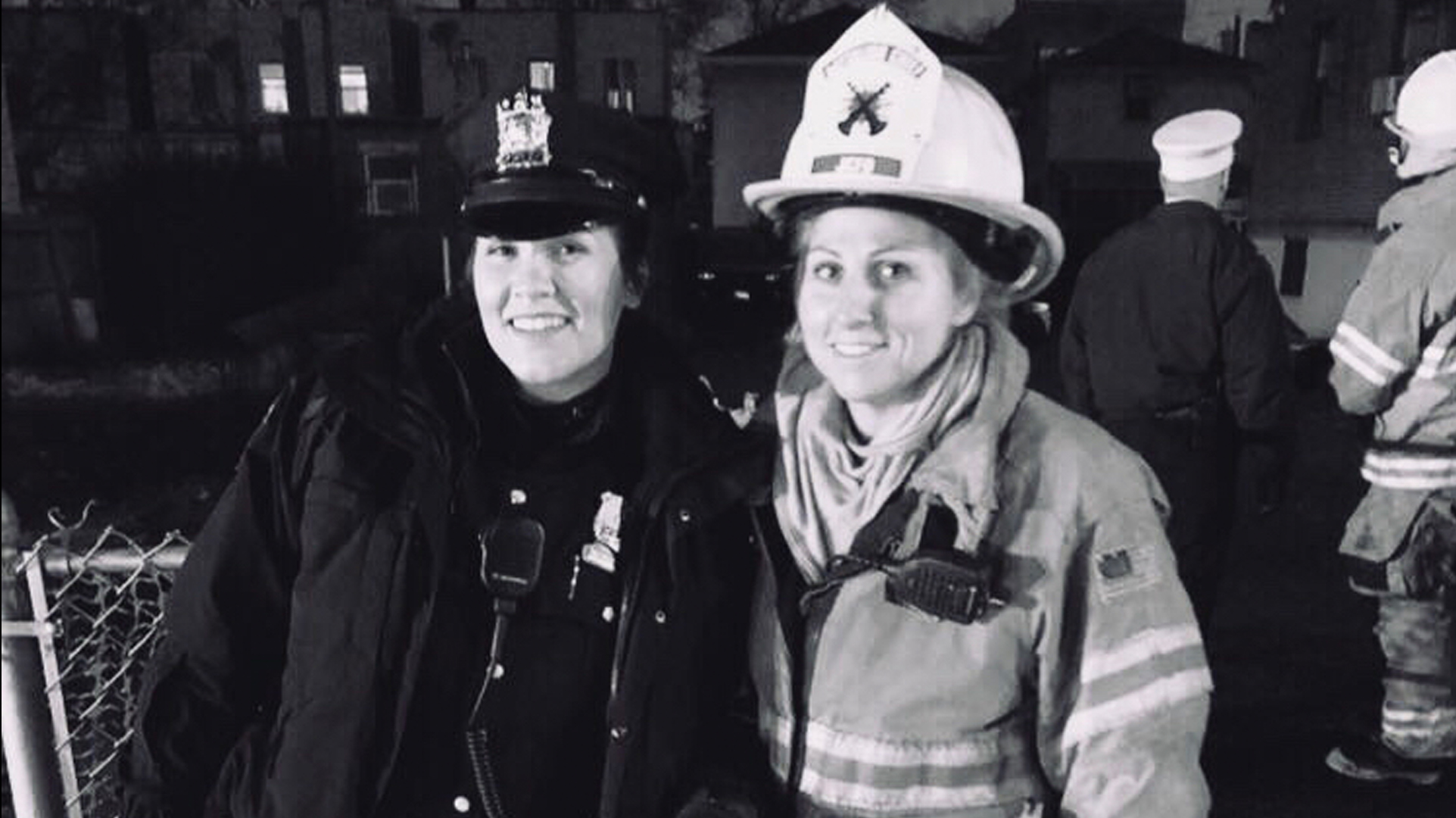 “[When first found out that my sister was going to be a firefighter,] I just thought it was the coolest thing. I was very little. I think probably around eight. We have stairs in our house, and she would throw me over her shoulders and run up and down the stairs practicing. I thought it was great. Then, I went to the police academy and did that for three years. Connie was like, “Come on, you got to do fire!” So I put in, I tested well, I did the physical, I went through the six months of the academy and was still kind of like, “I don’t know if I’m going to like it”. Then I spent one night in the house with these guys, and I knew that was it. In the firehouse, everything is done together down to the shopping. We clean together, we eat together, and it’s really like having a second family. I signed my papers the very next day.” – Francesca Zappella 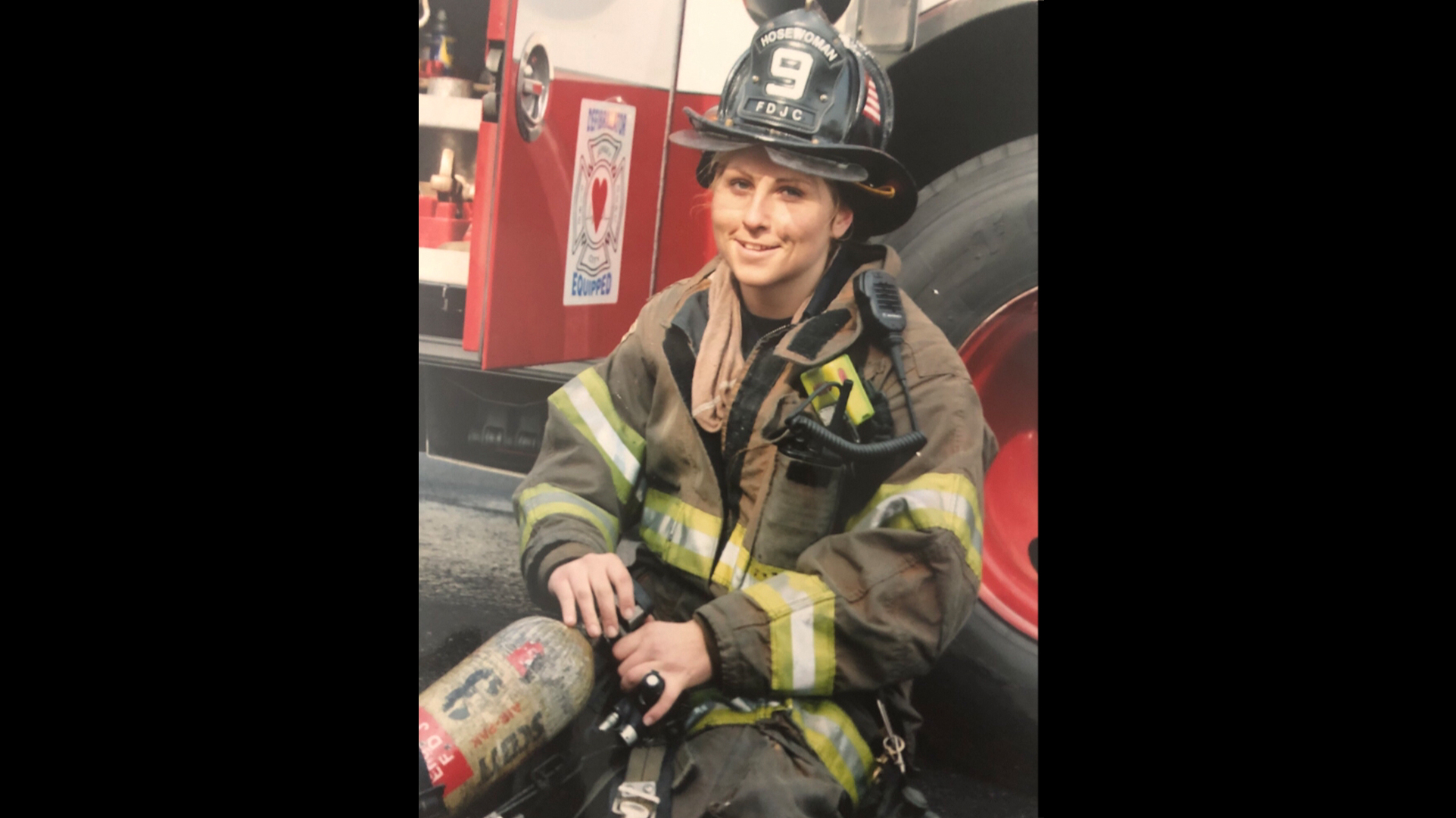 “It was never a thought in my mind that I couldn’t be a firefighter. Actually when I was told, “You’re going to be our first female,” I was more shocked that they didn’t have females than that I was going to be their first female. I was like, “What do you mean? You don’t have females?” I didn’t even know that. How could that be? When I came on, the men that worked with me knew that this is what I love to do and this was my career and that I was going to be around for a long time.” – Connie Zappella 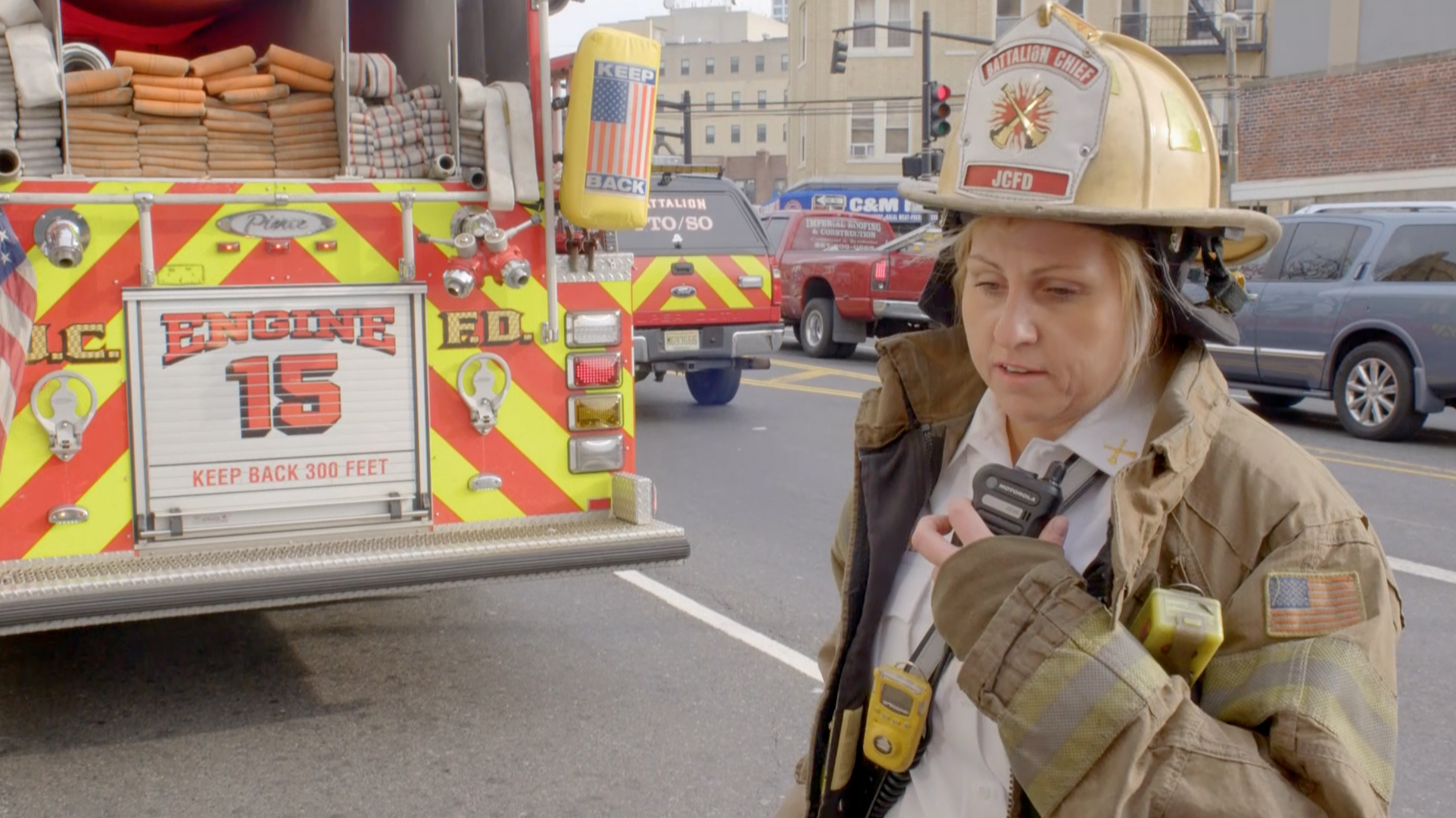 Connie talks into her radio at the scene of a 911 call.

“As Battalion Chief, I arrive on scene, usually as the incident commander. I will take command. Outside, I’m the eyes and ears for the firefighters who are now going inside. They’re reporting all the conditions of the fire or the incident to me on the outside. I can see things that they can’t see while they’re in there. I’m making sure that they’re safe. I’m keeping accountability of where all the companies are going. I am watching how the fire’s attacking the building or how the smoke and fire is spreading and how the building is reacting to the fire attack. I mean, buildings do collapse. Once the deputy chief, who is my boss, arrives, I dress into my protective clothing and I go into the building, and now I will be with the firefighters, making sure that they’re operating safely and giving reports back to the chief, who is now outside.” – Connie Zappella 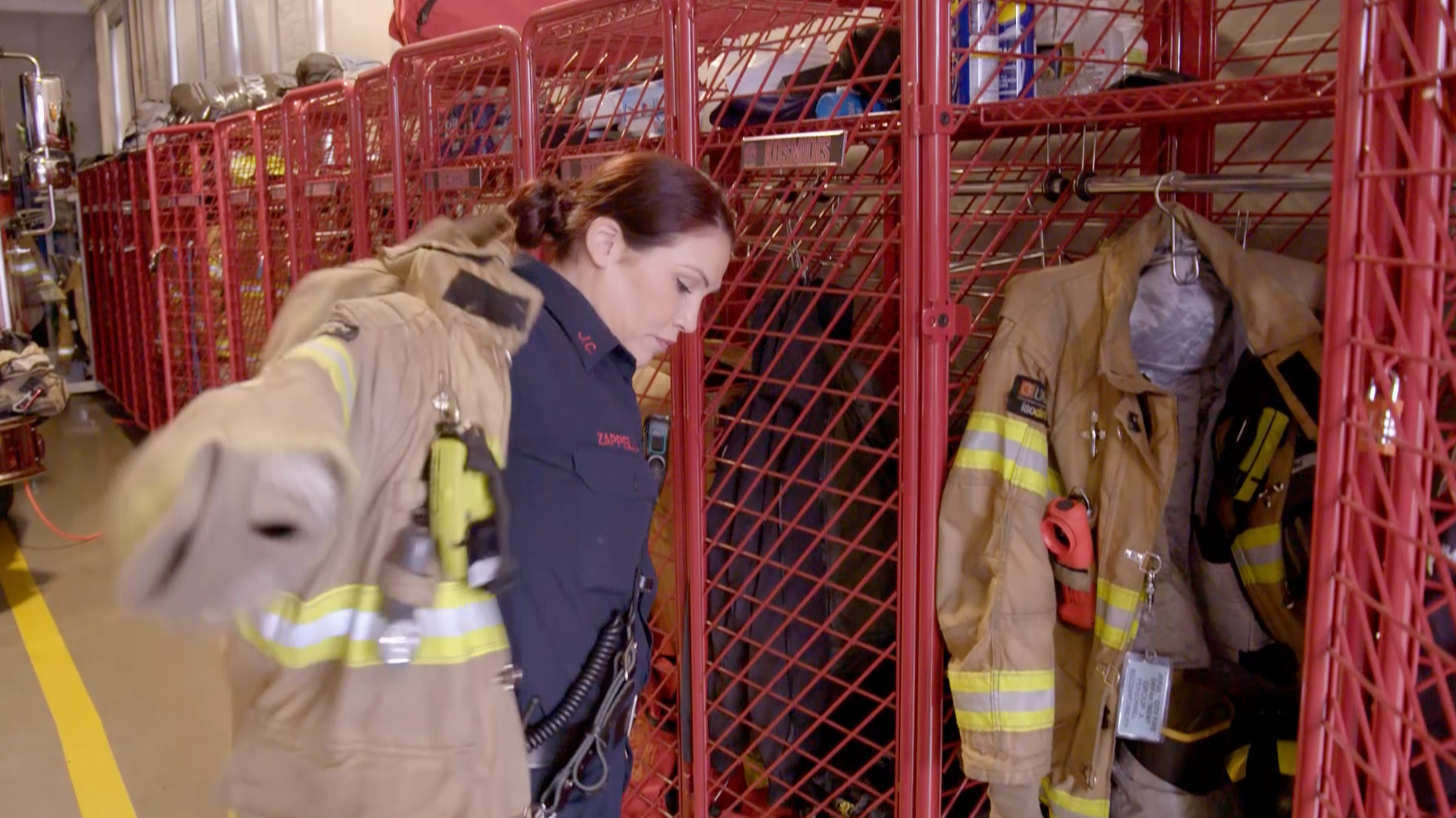 Francesca gets ready to go out on a call.

“When I hear the tones go off, I get dressed, and hop in the rig. You get dressed as fast as you can and you get out the door because you don’t know what’s going on. You put your SCBA on, which is what allows you to breathe inside a fire. I follow the captain in. He’s giving the size-up of the building as he’s walking up, over dispatch, to let the chief know what’s going on. And we go inside. There might be an alarm, and you’re trying to silence the alarm and figure out why it went off. If it’s a fire, you’re pulling lines off the rig and putting it out. All the equipment is heavy, but I have to say, in every fire situation I’ve been in, you’re focused on so many other things that you don’t even feel the weight. You’re just moving around, doing whatever your captain tells you, and that’s it. The weight’s not even an issue at that point.” – Francesca Zappella 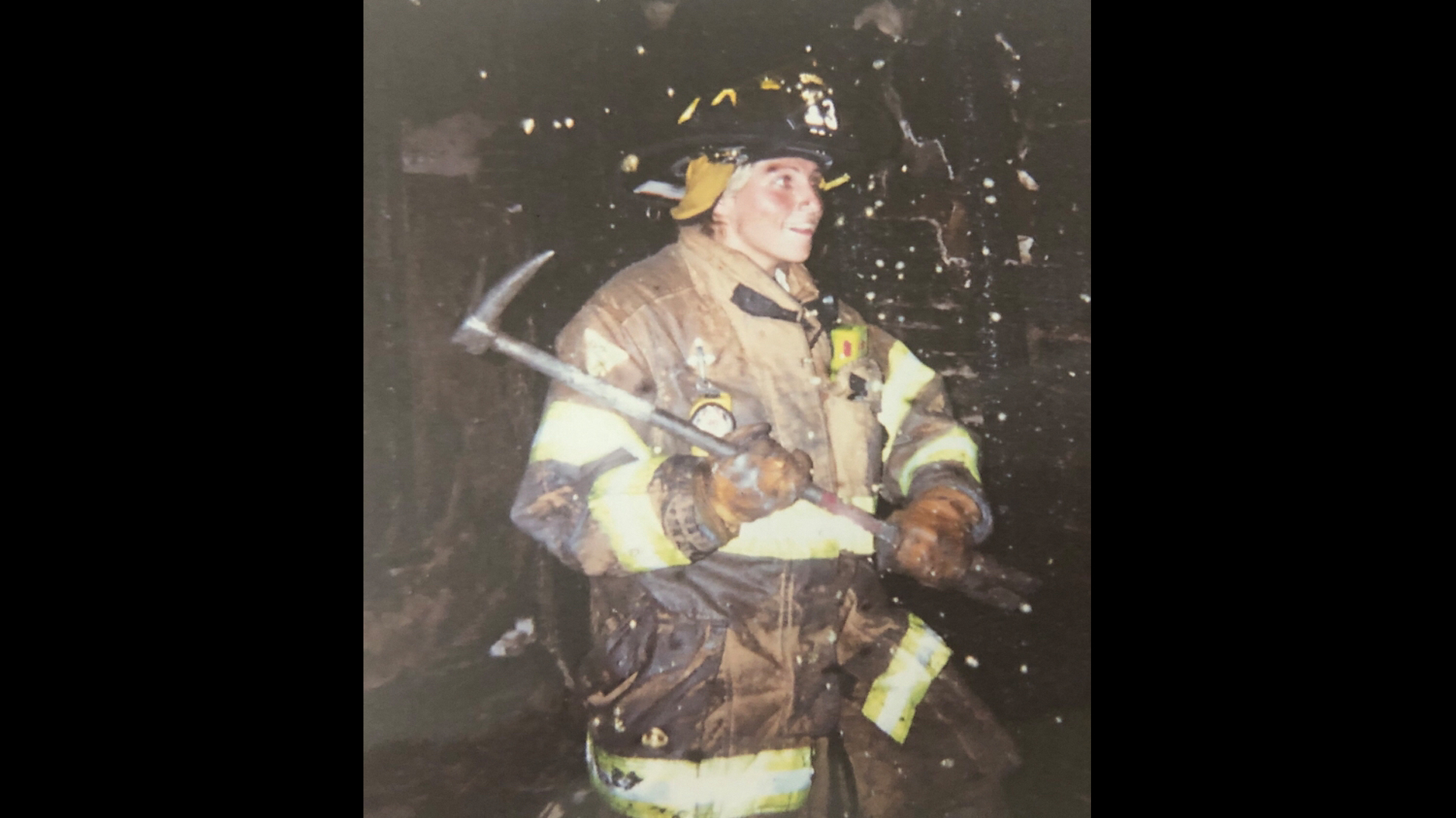 “People don’t realize what it’s like to be in a fire. You don’t see anything. It’s pitch black. You’re relying on your senses, basically. It’s an experience that, unless you experience it, it’s not something I could probably describe to you. When I go into schools, I explain it to children like this: “I’m not a superhero. I can’t go into a burning building and survive. I go into a burning building and survive because I have protective equipment. I have an SCBA that helps me breathe. But if something happens to that SCBA or I run out of air, I’m in trouble.” We rely on our equipment. We check our equipment every day. We rely on each other. That’s why there’s a lot of training involved and a lot of preparation.” – Connie Zappella 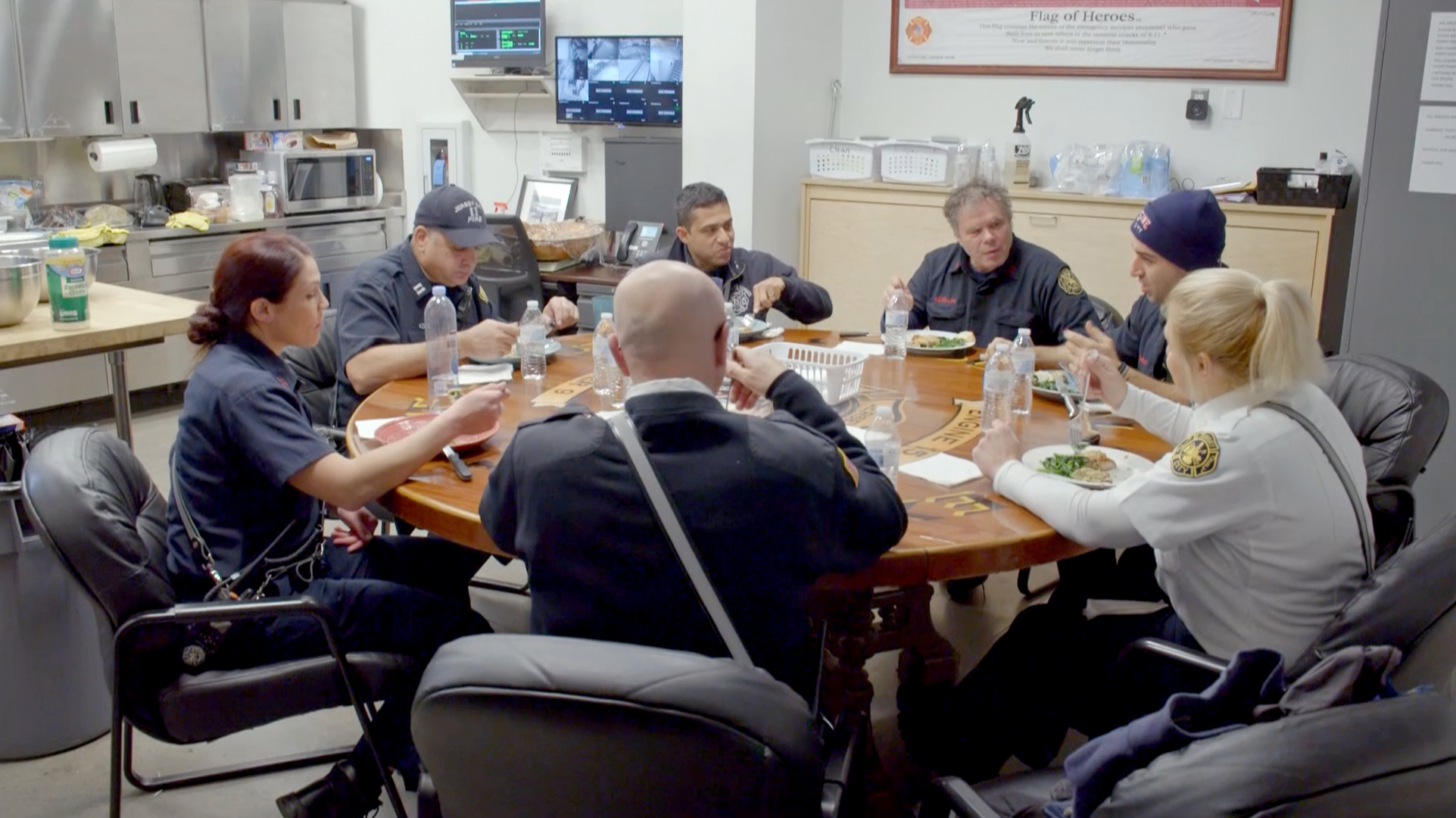 “It’s kind of natural for us, here at the station, to sit down and break bread together and feel the comradery; it really is our second family. There are a lot of guys who know how to cook. It’s usually one person that has a recipe and then all the rest of us help them with all the other stuff, whether it be breading chicken cutlets, or slicing things. On Sundays, we’ll do sauce with pasta and meatballs and everything. We make so many meatballs that we’ll have meatball sandwiches for lunch. I make vodka sauce here all the time. And they do like my cheesecake. You talk about everything. You know everything about your members’ children, their wives, their husbands. You know everything about them.” – Francesca Zappella