We Are What We Eat: Asian Americans and Food | PBS Food

We Are What We Eat: Asian Americans and Food

Truth be told, I mildly hated Chinese food as a kid. I spent most of the ‘80s growing up in Los Angeles’s San Gabriel Valley, a veritable mecca for Asian cuisine. My parents claimed to have chosen the area for the schools but I suspect proximity to good Chinese restaurants helped too. I wasn’t trying to hear any of that. As I saw it, we already ate Chinese at home so why did we need to go out for Cantonese seafood or Taiwanese pastries? Couldn’t we do Shakeys instead? Or if it was a really special occasion: Sizzler. (I was a kid, I didn’t know better.)

Maybe an ambivalence towards the food of our immigrant parents was part of a proxy battle we waged as a second-generation trying to carve out our identity turf. I feel like every Asian American memoir that came from a ‘70s or ‘80s baby like myself included at least one requisite passage where an author expresses embarrassment over lunch boxes filled with kimchi or natto or curry that invited stares or jeers from non-Asian peers. We yearned for hot dogs and hamburgers, milk shakes and chili fries: proper American fare to sooth assimilation anxieties. But inevitably, the author eventually learns to re-embrace her or his culinary traditions (almost always via some dish their grandmother prepared). The moral: learning to love our food was learning to love ourselves, learning to love heritage.

My reconciliation with Asian cuisine wasn’t quite as dramatic. Take a little homesickness and add in the utter mediocrity that was Berkeley’s Chinese food options in 1990s. But the real catalyst came when I began to recognize food as pleasure, as community, as a way to tell stories of where we came from and where we could go.

Those stories are told in Vietnamese shrimping boats in New Orleans and Isan BBQs in East Hollywood, Pakistani grills in Edison, NJ and Cambodian donut shops in Asheboro, NC. Especially for our parents’ generation, food was both a link to the past and an anchor for the future, allowing families to both eek out a living while also preserving a sense of community. However, as comforting and familiar as these stories may be, they only tell part of the tale of how Asian Americans relate to food. It’s no longer just a path to self-affirmation or self-sufficiency but has increasingly become a platform for self-expression, even self-empowerment.

Asian Americans may still be on margins of other social spheres—whether politics or pop culture—but food? We got this; that’s our thing. All those years where we had to work after school in our parents’ restaurants or markets? Or had relatives push stinky tofu and balut on us? Or had to explain to skeptical friends that full tables + Asians > health inspectors + grade placards? We walked a path paved with take-out boxes and buffet steam trays to arrive here, ready to stake a claim in the new food order.

It helped that we came of age concurrent with an era defined by the Food Network, Anthony Bourdain books, restaurant blog/sites, fusion taco trucks, et. al. Food culture has transformed into so-called “foodie” culture: adventurous, creative and cutting edge, where chefs are feted as part-rock stars, part-symphony conductors, part-gastronomical engineers. Food isn’t just about tradition anymore, let alone anything as pedestrian as sustenance; it’s about whipping up passion, flair and precision on a single plate (with a dollop of enoki-infused foam for good measure).

The defining Asian American cook of my childhood was the showy Martin Yan, of T.V.’s Yan Can Cook, but these days, our premier chef de cuisines have traded in big grins and bigger cleavers on PBS for disapproving scowls and cutting commentary on Top Chef. Figures like David Chang, Anita Lo, Eddie Huang and Sang Yoon are leading the vanguard; even the White House chef for the past two administrations and three terms, Cristeta Comerford, is Asian American.

But it’s not just about the Danny Bowiens or Mei Lins of the kitchen. We also write and edit cookbooks, we review restaurants, we get nominated for James Beard Awards, we create viral videos extolling the virtues of boba bars. Even the merely ordinary epicureans among us run amok on Yelp, start fights on Chowhound, and of course, inundate Instagram with pictures of our meals. (We even take pictures of each other taking pictures of our meals). 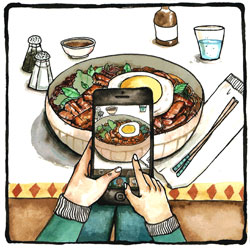 There’s a palpable giddiness to how all this has unfolded, fueled by the conviction that wherever American food culture is headed in the 21st century, it will be inseparable from Asian American culture. We want a seat at the table and a station in the kitchen. This has powered the emergence of a distinctly Asian American culinary sensibility, where we’ve become disinterested in appeasing the older generation’s insistence for authentic tradition or tempering flavors for the mainstream American palate. Instead, we’re cooking for folks like us, crafting menus where you can have spam and egg sliders next to spicy bowls of bun bo hue next to plates of Hainan chicken and that all seems to make sense together. In the past, you might have saddled a cuisine like that with the term “fusion” but today, it’s just how we eat and therefore, how we’re learning to cook.

Perhaps no single dish captures this quality better than the Chubby Pork Belly Bowl served at Roy Choi’s Chego. Choi’s best known for the Korean short rib taco his Kogi BBQ trucks serve but as much as that wondrous concoction is meant to capture the dominant flavors of post-immigrant Los Angeles, to me, the Chego bowl hits closer to home (and I’m not just saying that because it’s less than 7 miles from home). I once randomly ran into Choi at Chego and he explained the bowl was meant to invoke how Asian Americans raid our family fridges, dumping leftovers over day-old rice and then spiking it all with sambal, soy sauce and/or sriracha. Every time I take a bite, it feels both comfortingly familiar yet radically innovative. It doesn’t taste like the home I grew up in. It tastes like the home I’m trying to create.

Ironically—or better said, karmic-ly—now it’s my ten-year old daughter, growing up in the San Gabriel Valley, who complains about going out for Asian food all the time. She wants spaghetti or mac & cheese, not another trip for pho ga or hong shao rou or galbitang. For a while, she’d tell anyone who asked that “Chinese and Vietnamese food are my least favorite” which was like jabbing tiny daggers into my heart. It’s ok though. I know where she’s coming from and I know that while it may take another 10, 15 years, she’ll come back around. We all do eventually.

Oliver Wang is an associate professor of sociology at CSU-Long Beach. He contributes regularly to NPR, Medium.com’s Cuepoint, and other publications. He writes the audioblog, Soul-Sides.com. Twitter: soulsidescom