Once a member of the New York Port Authority Police, Eddie McNamara worked in rescue and recovery during 9-11 and has since struggled with PTSD. Now a chef, Eddie shares the story of how cooking has been instrumental in getting on the road to recovery. He talks with Lidia, about his experiences, as he prepares his signature Veggie Balls recipe. Lidia decided to share her own recipe for Meat and Eggplant meatballs, a dish that is delicious to deliver to first responders and those working the frontline.

As Lidia watches via zoom, Eddie McNamara prepares his special meatballs. He has made sure to have some delivered to her house, so they can eat ‘together’. 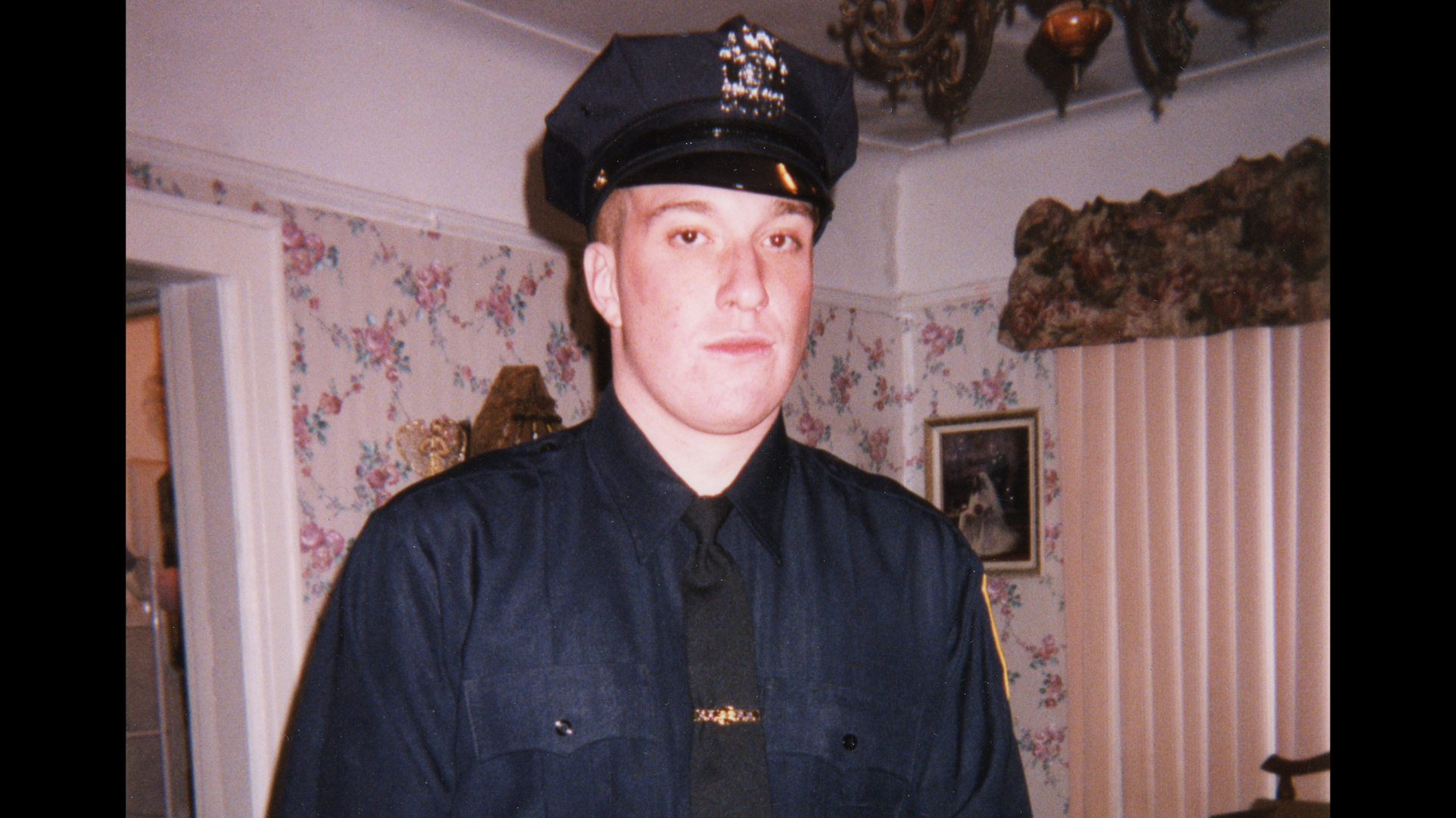 “I grew up in a very blue-collar New York neighborhood called Marine Park, in South Brooklyn. The people who were successful were police officers and firefighters, nurses, and teachers. I had taken a police test because that’s what you do when you’re from Marine Park, and they called me at the point where I was hating the advertising job I was in. I thought this could be something where I did something that maybe mattered. I also played music; I played in punk rock bands, hard-core bands, and rockabilly bands. I also had the idea that I might be a novelist. I was constantly writing with friends; we wrote two movies while I was a cop, and won the Buzz Award at the New York Film Festival in 2002, or something like that. I always needed a creative outlet.” – Eddie McNamara 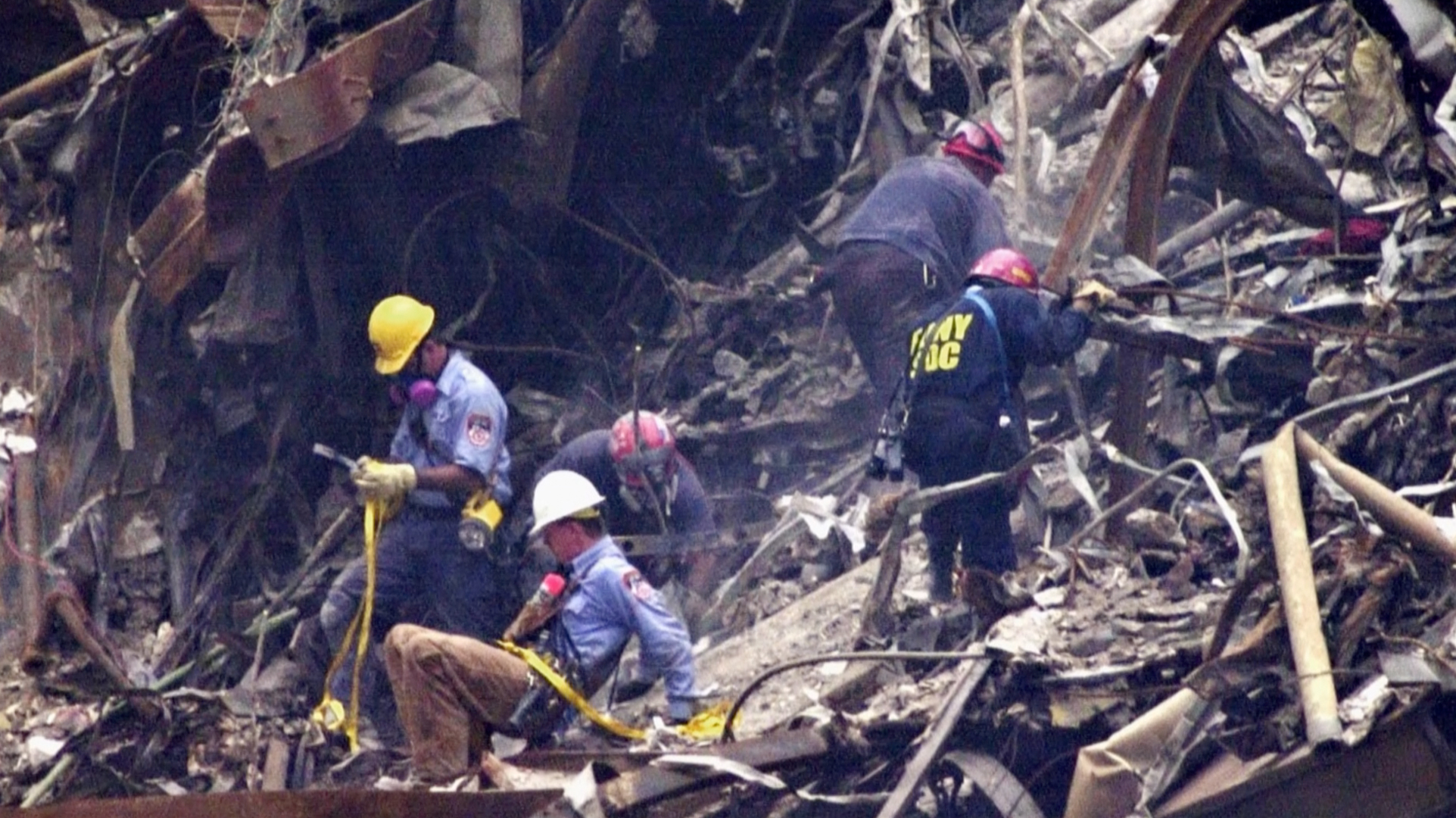 “[After 9/11], I don’t know if I slept for the month of September. I don’t know if anybody who worked there slept, it was just nuts. In the beginning, everyone was doing what we believed to be search and rescue, but that stopped happening after I guess maybe the morning of the 12th, whenever the last rescue was. We believed, for a really long time, that there was a pocket down there, and that’s where a bunch of people were. You had to tell yourself that, in order to keep doing the job, so that you’re doing recovery with the hope of rescue. It was after that, that I was diagnosed with PTSD, depression, panic disorder, and mild agoraphobia. I get very nervous about just simple things like crossing the street and I don’t know why. It feels dangerous to me. PTSD, for me, is feeling that things are very dangerous when they’re not dangerous at all.” – Eddie McNamara 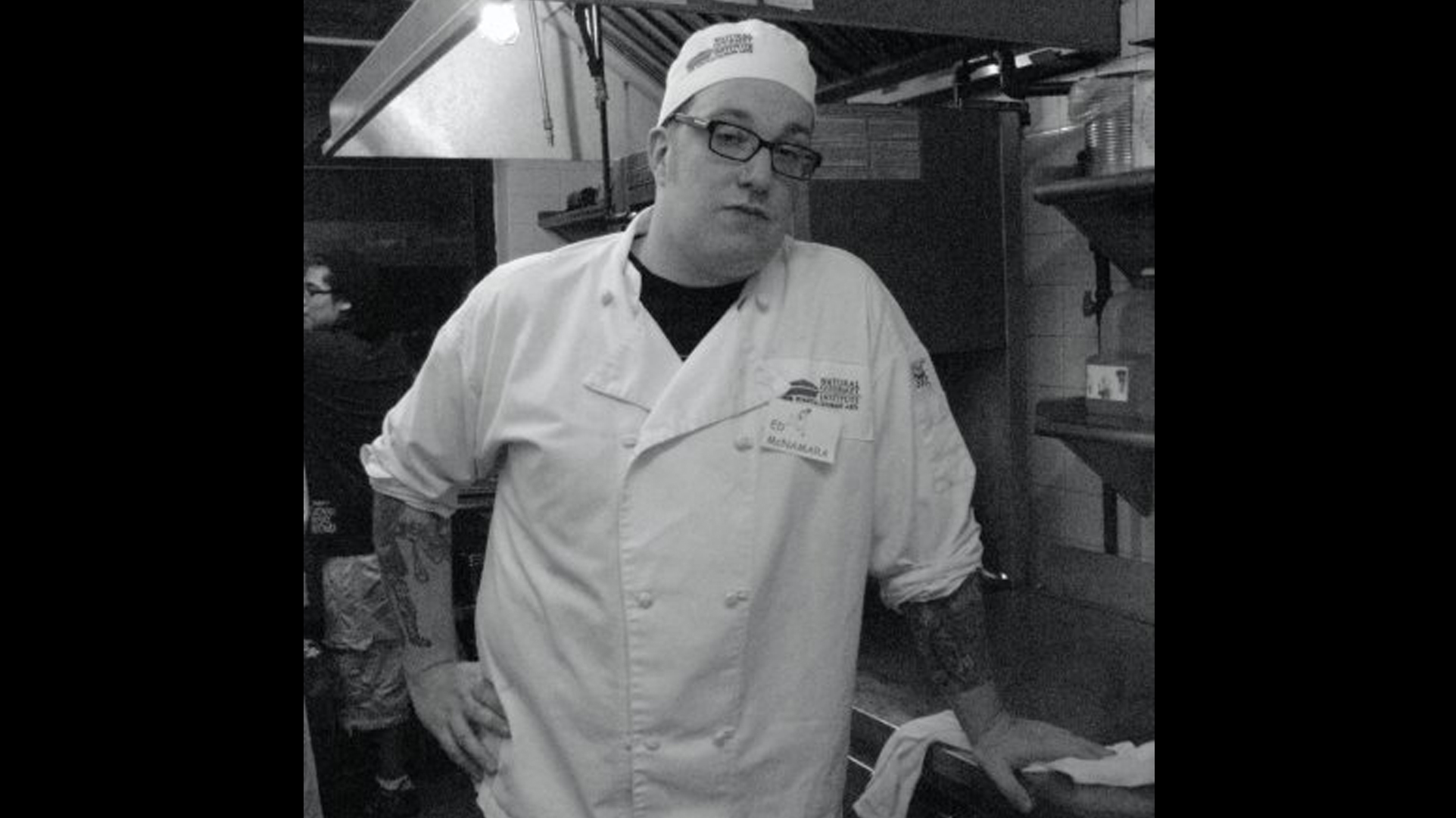 “I began therapy and medication in 2005. I don’t know if it helped greatly at first, but eventually, over the years, and with other lifestyle changes, (I took up yoga and meditation, became a vegetarian, stopped drinking, etc.,) I was able to get myself in order and not allow PTSD to take over. In 2006, I was living in Brooklyn, being just a bum on the couch. I’d watch the cooking channel, I’d watch PBS, and I’d buy cooking magazines. Where I lived, the supermarkets had great selections of spices and ingredients so, just to accomplish something, I would try to make dinner while my wife was at work. [My wife] gave me a gift; it was a basic knife skills course. I loved it. I was like, I can see myself doing this; I could be a chef. I worked in restaurants a little bit, and I ended up doing a vegetarian blog. I was doing recipes for InStyle, HGTV, Yoga Journal, and a whole bunch of places when magazines were a thing that had money and paid people. From there, I wrote a cookbook called ‘Toss Your Own Salad’.” – Eddie McNamara 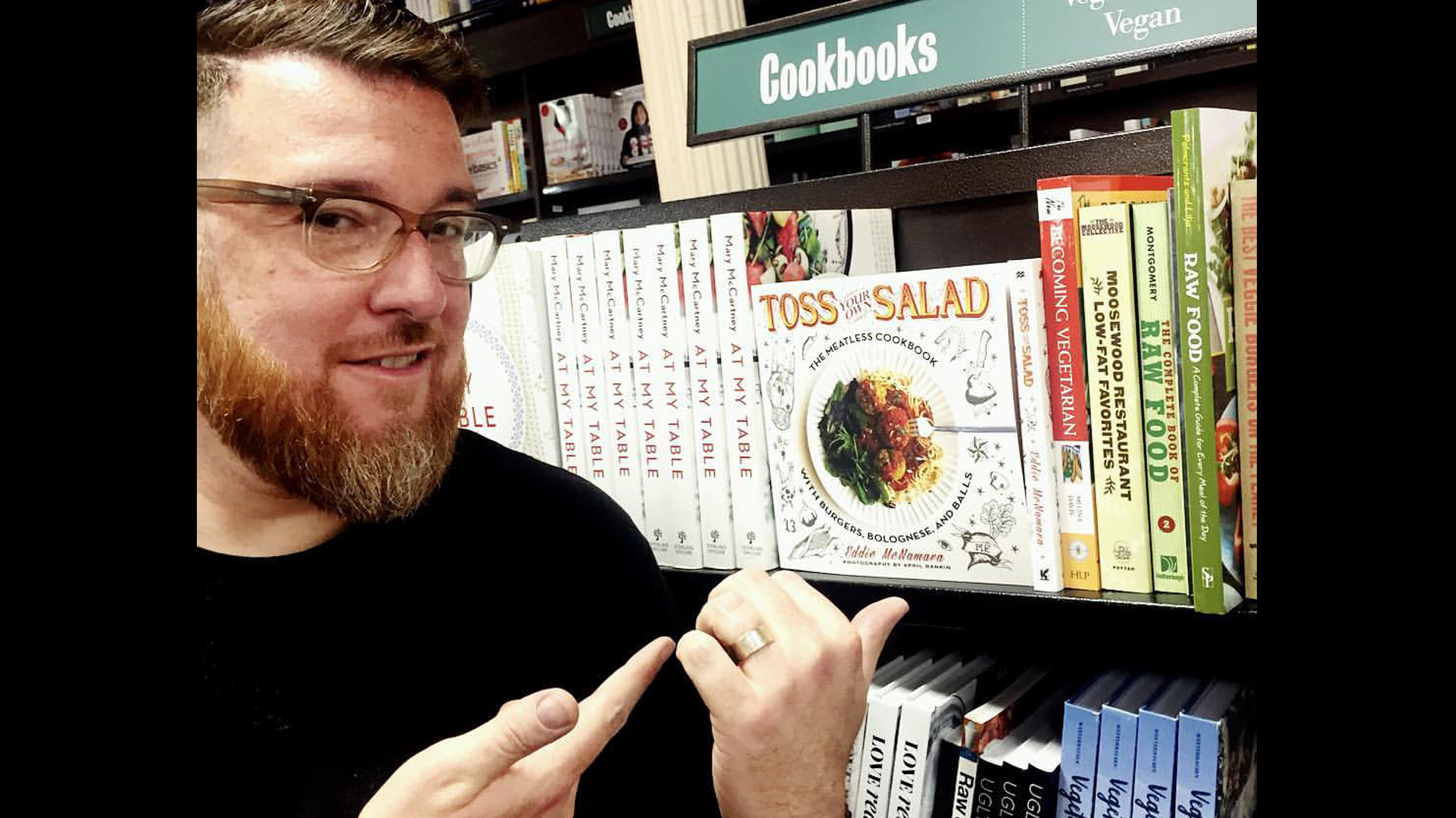 Eddie points to his cookbook, ‘Toss Your Own Salad’ on the shelves of a bookstore. Photo: Eddie McNamara

“If I’m chopping I am just focusing on the chopping. I’m not thinking about everything going wrong in my life, or how the events from the past are unpleasant to think about. I’m thinking about chopping a pepper. And at the end of the meal, I’ve accomplished something. And if friends and family like it, then my day wasn’t a waste, and I can write the recipe on my blog. I’m trying to de-stigmatize vegetarianism. I try to make it fun and tasty, not boring and preachy. If people want to eat meat, great! I hope you’re doing it in the most humane way. It’s a free country. Do what you do. What I do is vegetable-focused, but meat-and-potatoes guys can dig my food. When my dad liked something once, I was like, ‘all right, maybe I’m on to something with this.'” – Eddie McNamara 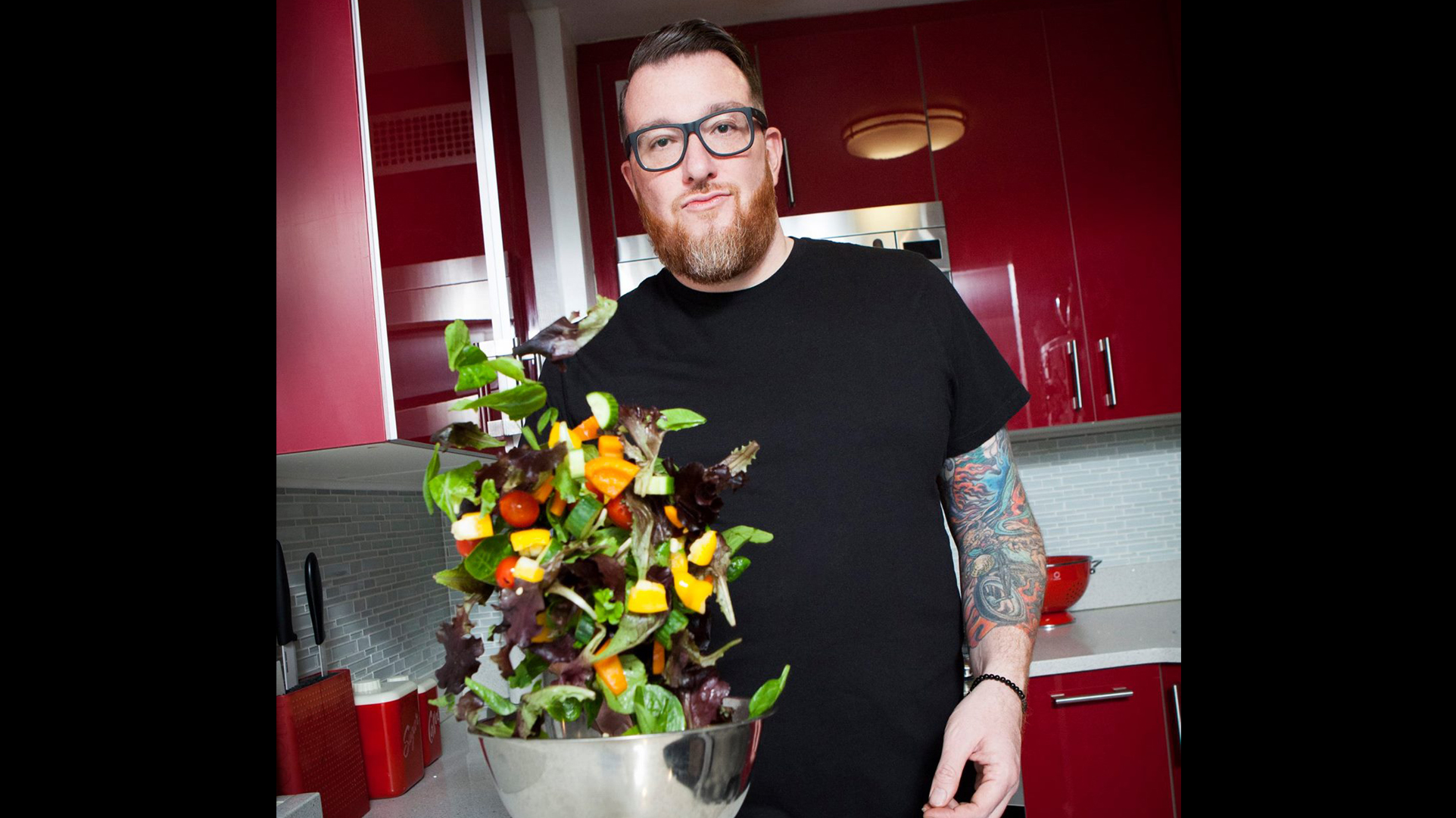 “I do absolutely appreciate what I was able to do as a police officer, although that ultimately wasn’t my dream. But I really enjoyed the service aspect of things, and it’s something I wanted to continue. Between the cooking blog, the cookbook, and the mental health column that I do, I feel I can continue to be of service.” – Eddie McNamara