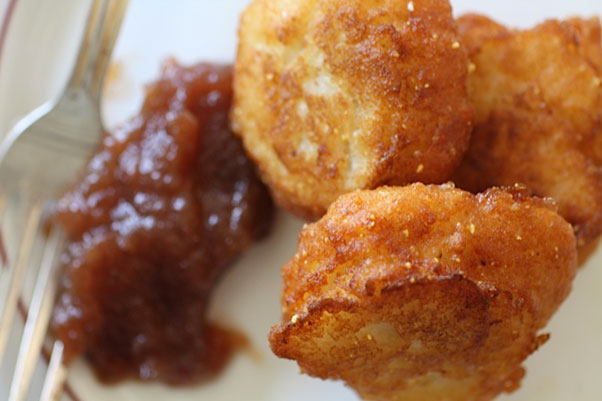 Things can go horribly wrong with potato pancakes. We love our latkes, those crispy fried treats often associated with the Festival of Lights, Hanukkah. Hanukkah is all about miracles: the scarce one day supply of oil in the Maccabees holy temple burned brightly for eight days while these brave Jews fought against their oppressors. And for the longest time I felt as though it would take a miracle to make a potato pancake that didnt end up flat, grayish and greasy. I wanted a Latke that would be light, crispy, golden brown on the outside but retain its white potato color on the inside. I wanted it to fry up thick, puffy and evenly cooked, instead of flat and crunchy around the perimeter but gelatinous in the middle. To achieve my Hanukkah miracle, I applied these tips or changes in technique and after several Maccabee-worthy efforts, I emerged victorious, with the Big Fluffy Golden Latke as my prize!

If you prefer your potato latkes to not be flat, these fluffy potato latkes will certainly satisfy you. Rachel Willen of FoodFix Kitchen shares five tips for making homemade latkes as well.

Rachel Willen is a chef, writer and teacher. She founded FoodFix Kitchen, a blog and NYC area cooking school by the same name. Why FoodFix Kitchen? Chef Rachel believes that there is very little that good food can’t fix!