Food Forward: Urban Agriculture Across America is a half-hour, character-driven survey of urban farming across the country. We meet the food rebels who are growing food right where we live–in cities. Lively animation starts us off asking some tough questions of industrial agriculture. Then, onto the streets of New York City with Dr. Dickson Despommier, author of The Vertical Farm Project. “Most of us live in cities now, over 50% and up to 80% in 20 years. We love each other, we like to be with each other, we like to sit down to a good meal together and we all know want to know what’s in our food. So why not grow it, where we live?” he asks.

Our first food rebel, John Mooney has a hydroponic rooftop farm on top of a one-hundred and five year old historic building in the West Village of Manhattan. Mooney tried conventional farming and felt that the technology of soil-less rooftop farming was, “just smart. It made sense.” Next, Andrew Coté, President of the New York City Beekeepers Association hawks his honey at the Tomkin’s Square Farmer’s Market in lower Manhattan. Coté explains how urban beekeeping helps to pollinate the urban farms and community gardens scattered throughout the city. 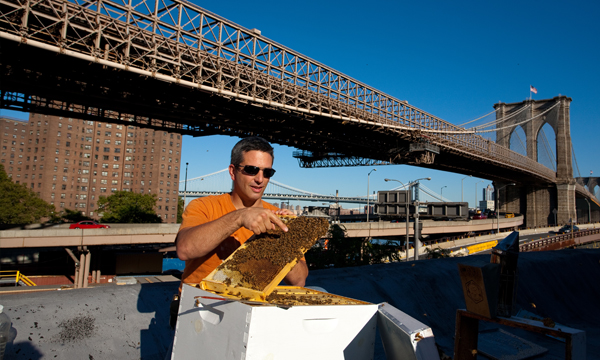 Urban beekeeper Andrew Coté points out the queen bee on one of his many rooftop hives with the Brooklyn Bridge in the background. (Photo by Greg Roden, © 2012 Food Forward Productions LLC)

Our tour of New York’s vibrant urban agriculture scene continues up into the Bronx where Karen Washington, owner of the Garden of Happiness, decides to take back empty and decaying lots to start growing food. Brooklyn is our next stop where hoards of hipsters are getting reacquainted with the sources of their food and getting behind the good food movement.

Leaving New York, we head to Milwaukee where the biggest name in urban agriculture, Will Allen, inspires a new generation of innovators. Will motivated the folks at Sweetwater Aquaponics into action, scaling up his Telapia farm to more of a commercial operation. We follow the flow of fish from 8,000 gallon tanks in an abandoned warehouse to plate at La Merenda restaurant. Moving on to West Oakland, we get an in-depth look at urban farmer Abeni Ramsey who came from the mean streets of West Oakland but is now running her own crew at City Girl Farms. 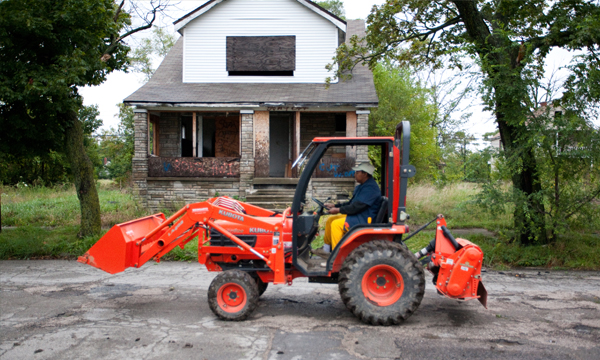 Finally, we finish in the food deserts, Detroit, MI, where we spend time with eighteen-year-old Travis Roberts, who grew up in Detroit, watching the city watching the city struggle with increasing urban blight. In trouble and more than 100 pounds overweight, he was headed in the wrong direction. But since then, he’s discovered the city’s urban agriculture movement and found a new purpose in life and is out to become an urban chicken rancher. Travis is joined by a cast of powerful characters in Detroit that are rebuilding their city, block by block.

“The idea that you have to have these huge farms in order to feed people is crazy because that means there would have been nobody feeding anyone before the 1970s.” More

“It’s very hard for me to put into words the feeling I get when I work with bees because it makes me feel a connection to nature, it’s meditative for me to work with them.” More

“You know sometimes people think food is a privilege. Food isn’t a privilege, it’s a right. And we want people to exercise that right to fresh, healthy produce in their neighborhood, and that’s what we’re all about.” More

“I really want to teach people about growing their own food. Being able to create their own backyard gardens and being able to support themselves.” More

“I’ve traveled the country and have talked to folks from universities to communities, and people WANT to be a part of this. They really believe and they’re passionate about their food, because that’s the one thing that connects all of us. Everybody’s gotta eat food.” More