How to Gain 60 Pounds While Watching the Super Bowl

For many, the Super Bowl is less about football and more about all of the big budget commercials. But just what kind of food is being advertised? So Good editor Jon Eick takes a deeper look at what kind of impact the food that gets advertised on Super Bowl Sunday might have on your waistline.

The return of Super Bowl Sunday means its time to settle into your couch  a cold beer in one hand and a hearty spread of food in reach of the other. Advertisers know eating and imbibing is a major part of the game day experience, which is why these products are prominently featured in another anticipated element of the Super Bowl: commercials.

Food & beverage advertisers want you eating and drinking  and doing so early. In 2011, 53% of food & beverage ads ran during the 1st quarter. But what if instead of passively watching the ads, a viewer attempted to consume literally everything edible that appeared in them? To do so in 2011 would have saddled you with 30 pounds worth of calories. It could have been worse. Attempting to consume everything from the 2010 commercials would have padded your midsection with an additional 60 pounds.

To determine these numbers, I looked at all the food & beverage commercials aired during the Super Bowl in 2011 & 2010 (a conveniently balanced 15 ads each year) and approximated a calorie count for everything visible on screen. I set a few basic ground rules in calculating the calorie count: It would include any food item that appeared in the ad (not just the product being advertised). It would not, however, include any food in close-up/promo shots that traditionally appear at the end of commercials. Additionally, any boxes, bags, bottles or other packaging were assumed to be full, but visibly bare containers (i.e. an already empty pizza box or empty soda bottle) did not count.

Despite advertising a light product, the top 3 calorie king commercials of 2011 were all Bud Light, clocking in at nearly 90,000 combined calories across three ads. Other than a brief appearance of 3 or 4 hamburgers at a cookout in one of the ads, this all came in the form of Bud Light. Lots and lots of Bud Light. The ad titled Hack Job had the biggest impact, accumulating more than 50,000 calories worth of beer as landscapers pile 12-pack after 12-pack into a backyard. A Budweiser ad clocked in at #4, assuring that all four beer ads of the night also had the highest calorie counts.

The nights other 11 commercials proved much less fattening, with none passing the 4,000 calorie barrier and five clocking in at fewer than 1,000 calories. Interestingly, non-beer ads for products such as Coke, Doritos, or Snickers often featured just a single serving or package of the product. One lone commercial had an official calorie count of zero: the Pepsi Max Shooting Cooler ad which featured nothing except the calorie-free product itself. All told, the food & beverages featured during the 2011 Super Bowl averaged more than 7,000 calories per ad, totaling approximately 106,000 calories, or 30 ½ pounds.

2010 was absolutely gluttonous by comparison, averaging more than 14,000 calories per ad, and totaling 212,000 calories, or about 60 ½ pounds. More than half of this total came from one single commercial. In a Doritos ad titled Casket, a man fakes death in order to be placed in a casket full of Doritos  which I estimate at approximately 126,000 calories worth of nacho cheese deliciousness. Ads for both Papa Johns (Approx. 46,000) and Emerald Nuts & Popcorn (Approx. 23,500) contributed greatly to the caloric total, as they featured large quantities of food being distributed to hungry crowds. The health food savants at Dennys were the surprising low-calorie ads of 2010. Its ads focused on animated chickens rather than a parade of actual Grand Slam plates  clocking in at only 995 total calories across three commercials. 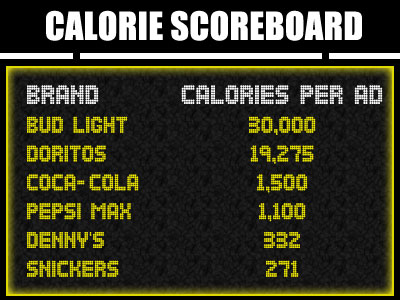 Super Bowl mainstays Anheuser-Busch, Coca-Cola, Pepsi and Doritos are all returning with commercials for 2012, and theyll be joined this year by M&Ms and Dannon Yogurt. So as you kick back and enjoy this years game, take note of the volume of food in this years commercials. Will these be the leanest, most low-cal Super Bowl ads of the decade? Or are we in line for even more cumulative gluttony?

Jon Eick is a humorist, writer and freelance marketing consultant. He has over 31 years of eating experience and 25 years of TV commercial viewing. Since 2007, he has been editor & owner of So Good, billed as “An Absurd Look at the World of Food” and ranked by AdAge as one of the 50 most powerful marketing blogs. Originally from Vermont, Jon now resides in our nations capital where he passionately follows the Washington Nationals. He dreams of one day appearing on the TV show Survivor, or, barring that, surviving. You can also find him on Twitter and Facebook.