Ice Cream: An American Favorite Since the Founding Fathers 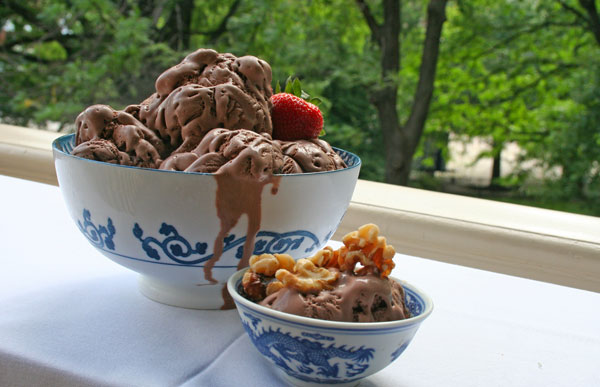 By Molly Yun, Researcher at A Taste of History

As researcher for Chef Walter Staibs A Taste of History show, its always surprising when we stumble across foods that were as popular in the 1770s as they are today. Chef Staib will flip through period cookbooks and find receipts (now known as recipes) for exotic and out-of-fashion foods, such as peacock hen, and get the team moving on finding out more. But sometimes we also find familiar foods like ice cream!

Chef Staib is a food historian who focuses on the gourmet delicacies of early America. He discovers what the elite of society, such as the Continental Congress and later U.S. Congress and presidents dined on while in their homes and in the White House. The team has filmed his show A Taste of History at the first five presidential homes and cooked in many historical locations.

Were always looking for first-person accounts of what those famous foodies ate. As it turns out, ice cream is no modern-day love affair. Well before the first ice cream truck rolled down our streets, Thomas Jefferson, George and Martha Washington and even regular colonists screamed for ice cream. Ancient Romans enjoyed iced treats under Neros reign when large blocks of ice were harvested from nearby mountains. By the 1700s, ice creams and sorbets were all the rage in European courts. This love of creamy, decadent and cold dessert spread to the American colonies as epicureans settled into their new homes.

In 1790, the first ice cream parlor opened in New York. In late June 1791, a notice appeared in the Pennsylvania Gazette announcing the details of that years July 4th celebration. On the menu that year at Grays Gardens were the confections of Mr. de la Croiz, including iced creams of a great variety. Great estates, including Mount Vernon and Monticello, had their own cream machines for ice.

In the upcoming book A Sweet Taste of History, due out in November published by Globe Pequot Press, there are hundreds of dessert recipes from the 18th century. We worked with Pastry Chef Diana Wolkow to recreate the sweets of a bygone era in modern terms for todays cooks. Among those recipes are an entire chapter on ice creams and this excellent vanilla version below. In the forthcoming book and on his show, Chef Staib dedicates a favorite American treat to an epicurean first lady who was famous for her parties.

Dolley Madison, the first lady of the United States and wife of James Madison, fourth president of America, popularized ice cream in the White House. It was still a very impressive dessert because modern freezers were not introduced yet. To make ice cream, an estate relied on an ice house with large blocks of ice cut from frozen water, packed on straw and held in a cool place.

Chef Staib recently visited the Madison home in Montpelier, Va., to learn her tricks to make the best ice cream. He cooked a few of the first ladys favorite dishes, including the Southern inspired menu of Hoppin John, Virginia Ham and Oysters, Kidney Dijonnaise and topped it all off a dessert of hand churned vanilla ice cream, peaches and raspberry sauce.

Dolley preferred oyster ice cream. She used small, sweet oysters from the Potomac River near her home to churn up an interesting dessert. In 18th century cookbooks, chefs didnt stick to the basics. Recipes for parmesan ice cream, asparagus ice cream, chestnut cream and many other flavors that dont grace our modern day tables were popular. But if you prefer something a bit sweeter and more conventional to the 21st century palate, stir in other toppings at the last moment, such as cookies or fresh berries, or enjoy on its own. 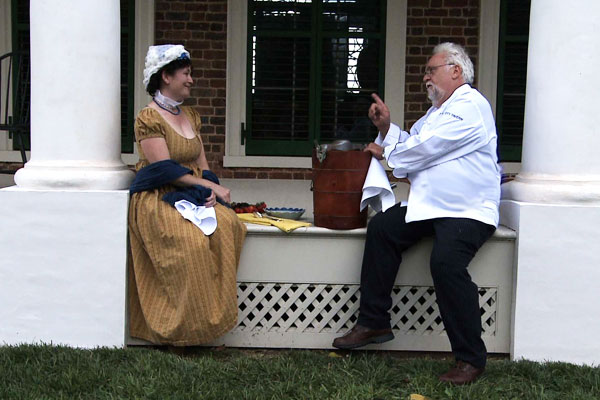 Chef Walter Staib of A Taste of History shares this vanilla ice cream recipe. In a fun article, Chef Staib explains that the founding fathers were critical in bringing the dessert to America, even Dolley Madison was a fan.

This vanilla ice cream is pictured with sauce and almonds, which you may add or change to include your own toppings.

Molly Yun writes about her love of the culinary arts, historical customs and a variety of topics in print and online. Her passion is to tell the real stories of the past through relatable subject matter. She researches and writes scripts for the PBS cooking show A Taste of History. Her theatrical script was seen on stage as part of the Philadelphia International Festival of the Arts. She is co-author of the forthcoming A Sweet Taste of History cookbook.

Walter Staib has made numerous appearances on local and national cooking shows, such as the Today show and the Food Networks Best Thing I Ever Ate and Iron Chef. He is the host of the Emmy Award winning show A Taste of History, which received the 2012 James Beard Foundation nomination for Best TV Show On Location. The show is a vehicle for Staib to share 18th century cuisine with a growing audience. Currently, he can be seen nationwide for the fourth season on PBS and on national cable on RLTV. The show was awarded three Emmy awards in its first two seasons.

Discover the History of Ice Cream
Explore the history of ice cream in this column from “The History Kitchen” by culinary anthropologist Tori Avey.

What Are the Best Ice Cream Shops in America?
PBS employees share their favorite spots from across the country. What are your top picks?