Watch Lidia make a porchetta roll with Jon and Tara Darling, and have dinner outside, with friends and family. 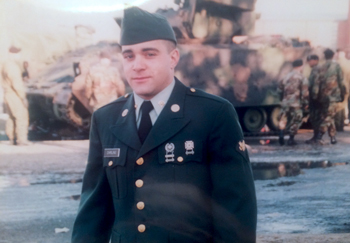 Like many veterans, Darling didn’t know what to do when he returned home after the Army. After some tough times, and even some run-ins with the law, he says, “I didn’t feel like I fit in anywhere and was starting to question my character.”

Farming became the answer for him and a kind of therapy for his PTSD. He started by farming lambs, but now raises hybrid pigs. Together he and his wife, Tara, create and serve farm-to-table dinners for local friends and veterans.