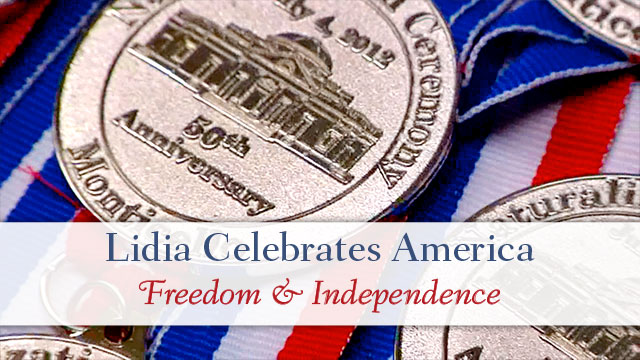 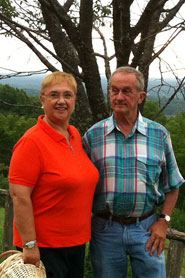 The program begins on the eve of the 4th of July in Charlottesville, Virginia at Monticello, the home of Thomas Jefferson, and follows a number of new citizens as they are sworn in to become U.S. citizens on the front steps. Lidia and viewers are given a special tour of the incredible Monticello grounds from Assistant Director of Gardens and Grounds Gabriele Rausse to better understand Thomas Jefferson’s philosophy and his role in the nation’s development of agriculture—something he deemed essential for American independence and autonomy. Jefferson realized for a country to truly be independent, it had to be able to feed itself and develop trade with others, a concept that is evident in the diverse fauna and fruits Jefferson had planted in his gardens, which still exist today.

Lidia and Gabriele end the tour with an experience Lidia describes as one she will never forget: creating Fig and Prosciutto Proscetta and a Fresh Tomato Panzanella from ingredients picked in Thomas Jefferson’s garden and prepared in his actual kitchen. The dishes are part of a grand dinner that evening celebrating not only Independence Day but also the naturalization of 80 new citizens.

After a performance by American Soprano Renee Fleming, Lidia joins several of the soon-to-be naturalized guests for a meal featuring foods prepared by the attendees representing their native homelands. Among them is an enthusiastic young Middle Eastern woman, Faiza Jamil, who has already embraced her adopted homeland where she lives with her American husband and family, and is now eager to be a full-fledged voting citizen. Faiza invites Lidia into her kitchen and demonstrates how to cook Karahi Chicken, the first dish Faiza’s mother taught her to make.

During the meal, Lidia candidly recounts her own personal immigrant story of her escape from communist Istria at age 12, after World War II. Her father was taken hostage and later fled bullets and dogs to cross the border and reunite with the family. They came to the United States under President Eisenhower’s political refugee policy. The family had nothing and was assisted by a charity organization. At age 18, Lidia made the commitment to become an American citizen and was the first among her family to become naturalized.