Economies of Community | The Lexicon of Sustainability | PBS Food

The principle known as economies of scale has allowed entire industries to consolidate and become more efficient, including our food system. Now theres no difference between a supermarket in Kansas City or Boston or San Diego or Fort Lauderdale. And our culture is the poorer for it. Benzi Ronen of Brooklyn, New York-based Farmigo explains how the principle of economies of community can help connect people while rebuilding local food systems.

Economies of scale
Focusing on single crops and reducing input costs to a minimumthen communities can leverage their greatest assetsproximity, familiarity, and private ownershipto compete with the global food system.
– Douglas Gayeton, LOCAL: The New Face of Food and Farming in America

Local food system
A regional food system is one that supports long-term connections between farmers and consumers while meeting the economic, social, health and environmental needs of communities in a region. A food system includes everything associated with growing, processing, storing, distributing, transporting and selling food. A food system is local when it allows food producers and their customers to interact face-to-face; regional systems serve larger geographical areas, often within a state or metro area.
– Leopold Center for Sustainable Agriculture

The Marshall Plan
At the end of World War II, cities, bridges, power stations, railwaysthe entire infrastructure of Nazi Germanywas destroyed by Allied bombers. Then the U.S. helped rebuild everything.
– Douglas Gayeton, LOCAL: The New Face of Food and Farming in America 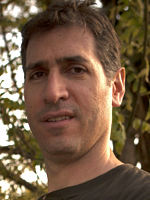 Benzi Ronen
Farmigo
Benzi and his Farmigo team are dedicated to accelerating the adoption of an alternative food system through People Powered Farmers Markets. Farmigo provides a platform for food entrepreneurs to launch their own farmers markets and management software tools to farms.