Host Marcus Samuelsson goes to Seattle, where he spends time with immigrant and second-generation Filipinos who are taking charge of their city’s food scene. As Filipino food gains more national, mainstream recognition, members of the community are working to tell the story on their own terms. In this episode, Marcus meets chefs and restaurateurs who have been serving Filipino food in the city for decades, including in Seattle’s iconic Pike Place Market, and also gets to know younger chefs and entrepreneurs to see how they put their spin on their culture’s food traditions. 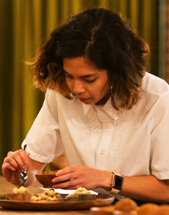 Washington State native Amber Rosario Manuguid is a Seattle-based artist and designer-restaurateur. As a designer, Amber’s strength is creating joyful and meaningful experiences. Amber has been a vocal advocate of under-represented communities, with a focus on empowering Filipino Americans. As an active volunteer for the Seattle’s Filipino American community, she uses her professional skills and experience to encourage others to “dream big.” On December 1, 2018, Amber, with chef husband, Aaron Verzosa, opened Archipelago in Seattle, WA. Part-tasting menu, part-history lesson, Archipelago offers diners the taste of Filipino flavors using Northwest ingredients. At Archipelago, Amber is excited to finally merge her professional skills and passion for Filipino American history, while honoring her family and exploring the beauty, creativity, and resourcefulness of her culture. 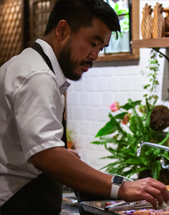 Aaron Verzosa is a Filipino American chef born and raised in the Pacific Northwest. After graduating from the University of Washington, Aaron attended the Seattle Culinary Academy while working in the Basque focused Spanish restaurant, The Harvest Vine. In 2010, Aaron then joined Intellectual Venture’s Modernist Cuisine team lead by Nathan Myrvohld, working as an R&D Chef for over five years. Aaron has been engaged in the Filipino American community for many years and has been able to focus his activism in the food industry as a founder of ILAW: A Coalition of Filipino Food & Beverage Professionals in the Pacific Northwest. On December 1, 2018, Aaron, with his wife, Amber Manuguid, opened Archipelago in Seattle, WA. Part-tasting menu, part-history lesson, Archipelago offers diners memories of Filipino flavors using Northwest ingredients. Through Archipelago, Aaron has been able to marry his love for the craft of cooking with the flavors of his Filipino roots. . 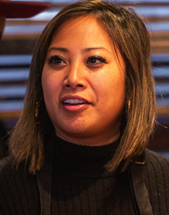 Melissa Miranda grew up in Seattle and graduated from the University of Washington. She discovered the fast-paced culinary world was truly her passion and decided to move to Italy to pursue her culinary career to attend Florence University of the Art’s Culinary Program. After five years living and working in Italy, Melissa moved back to the States spending two years in New York, consulting and working, expanding her knowledge of management and techniques of cooking. Melissa is currently back in Seattle and is the chef/owner of Musang, a Filipino Pop Up Restaurant, which will become a brick and mortar space at the end of this year in Beacon Hill. She is also a co founder of Ilaw, a coalition aimed to promote, serve, and empower Filipino Food & Beverage professionals in the Pacific Northwest. 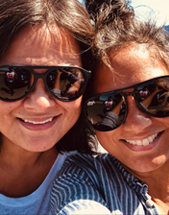 With the guidance of their Filipino mentor and inspiration Mom, Isabel (affectionately known around the house as Mama Knee High), self-taught chef/sisters, Michelle Valko and Pamela Carpio, are the folksy team behind Seattle’s iconic restaurant speakeasy, Knee High Stocking Co, as well as, their latest endeavor late night food walk up window, Jeepney Cap Hill. Knee High and Jeepney Cap Hill feature a fusion of Filipino ingredients and flavors meets American comfort fare, a fusion that reflects both the sisters’ American Midwestern upbringing, as well as, mixed Filipino/Spanish roots. Their menu is inspired by two specific regions of the Philippines where the family originates, Zamboanga City, on the Southern most island (Mindanao), a port town heavily influenced by Spanish, Malay and indigenous culture, flavor and ingredients. As well as Baguio, a mountain town on Luzon, the northernmost island. The menus change seasonally and strive to incorporate locally owned/operated as well as Filipino owned/operated products and or ingredients. 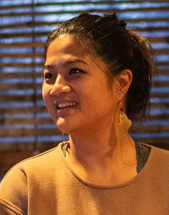 Chera Amlag is the co-owner and founder of Hood Famous Bakeshop (Ballard) and Hood Famous Cafe + Bar, a dessert shop offering her original takes on traditional Filipino sweets and flavors. She was born in the Philippines, grew up in Bremerton, graduated from the University of Washington, and currently resides in Seattle with her husband, Geo, and two sons. 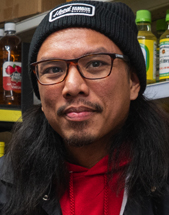 Geo Quibuyen is the co-owner and founder Hood Famous Bakeshop (Ballard) and Hood Famous Cafe + Bar. Along with running Hood Famous with his wife, Chera, Geo (as Prometheus Brown) is an accomplished musician–he is the vocalist for Seattle hip-hop group Blue Scholars, as well as a member of the West-Coast based Beatrock Music collective. 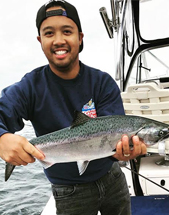 Chef Brian Madayag is the owner of Barkada Edmonds, a Filipinx Comfort Food Joint serving inspirations from Brian’s Filipino/Hawaiian lineage. Brian was raised in Edmonds, a small boating town 30 minutes north of downtown Seattle, where he is a part of a fast growing food community. Before attending Seattle Culinary Academy he worked in many establishments around downtown bar managing, consulting, and tending including the Pan Pacific Hotel, Venom Night Club, Siam On Lake Union, and Amber Lounge. In 2008, Brian started honing his craft for food working for restauranteur Tom Douglas for nearly a decade. He was the Chef at Cantina Lena and worked at Palace Kitchen, the Dahlia lounge and helped with openings of Hot Stove Society and Seatown Market Diner at the Pike Place Market. He is also a member of Ilaw, a coalition aimed to promote, serve, and empower Filipino Food & Beverage Professionals in the Pacific Northwest.

Where Marcus Visited in Seattle